Please welcome A.E. Via today for her blog tour stop of Nothing Special.  Below is an excerpt, the review, and at the end, there will be a giveaway.  There is also an art piece you don’t want to miss! Come on over and learn about these wonderful characters!

Update: contest has been extended to April 20th at 11:59 PM CDT.  Original commentators were not eligible for the giveaway and so it has been reopened! Comment for your chance to win!

Thank you to A.E. for the opportunity to read Nothing Special. 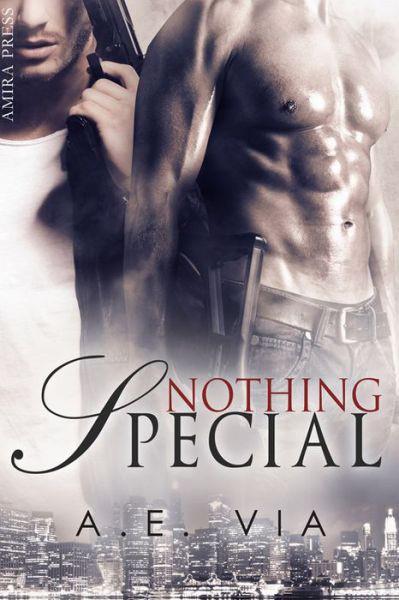 Detective Cashel ‘Cash’ Godfrey is big, tattooed and angry so people typically keep their distance. He’s fresh out of the police academy, however, no one is looking to partner with the six foot four beast with a huge chip on his shoulder and an inability to trust. When Cash scans the orientation room he wasn’t expecting to find sexy hazel eyes locked onto him. Eyes of the handsome Detective Leonidis ‘Leo’ Day.

Leo is charming, witty, hilariously sarcastic and the only one that can make Cash smile. He’s proud, out and one bad-ass detective.​

Together Cash and Leo become the most revered and successful narcotics detectives Atlanta’s ever seen. Able to communicate and understand each other, without even having to voice it, they quickly climb up the promotional ranks.

When Cash saves Leo’s life in a raid that turns deadly, Leo begins to see something in the big man that no one else does…something special. But Leo fears he’ll never break through the impenetrable wall that protects Cash’s heart.

Title and Synopsis created by the LaSalle Sister of Man2Mantastic.

“You can’t always get what you want, Leonidis,” God rebutted.

“I want you,” Day said with no hesitation.

The room was deathly silent. After a few long seconds God responded simply, “No you don’t.”

“I do. Isn’t it obvious?” Day moved a little closer.

“You don’t know what the fuck you want. I’ve watched you for four years, jumping from bed to bed and fucking your way through half of Atlanta. I have one emotional night and all of a sudden you want me…fuck you,” God said in his gruffest voice.

Day’s body heated instantly at the sound. He moved even closer to where God was standing on the opposite side of the table.

“Oh, I’m sorry. I didn’t realize I was supposed to be saving myself for marriage, and even more so, I didn’t realize you were a goddamn virgin. How many women have I seen you fuck in that pussy-getting truck of yours, huh?” Day lowered his voice as he stood directly in front of God. “Just tell me you didn’t feel what I did last night.” He closed the small gap, not minding God’s height at all, and looked up into electric-green eyes. “Tell me you don’t want me too, and I’ll back the fuck off.”

God looked down at him and Day could see the uncertainty all over that ruggedly handsome face.

“Make me understand, Cashel,” Day whispered and slowly brought his hands up to rest on God’s waist.

Day groaned. He held on tight while God hoisted him up against the wall and attacked his mouth. It wasn’t pretty or gentle. His partner kissed him with a fury that he hadn’t felt in years. It was erotically carnal, wicked, and Day loved every second. His feet dangled as God’s bulk pushed hard against him, keeping him immobile and under his control.

“This what you want, you sexy fucker?” God snarled in his ear, then leaned in and bit the juncture of his neck that met with his shoulder.

“Ugh, yes! I want you goddammit,” Day hissed into the darkness.

“Prove it.” God released him and Day dropped back to the ground. He immediately felt the loss of God’s heat and had to resist the urge to claw at the man.

Day palmed his own hard erection.

“Seriously. This isn’t fucking proof enough?” he said while seductively squeezing his cock and licking his red lips now full and plump from their kiss.

“I don’t give a damn about your wood. You get a hard-on when you drink coffee, Leo.” God grabbed his coat and headed to the door. “If you want it, you’ll have to earn it.”

Day stalked over to him. “Did you make all those other bitches you fucked earn it first?” Day fumed. Not liking that God was thinking of playing a come-and-get-it game with him.

God spun around fast and gripped Day around his throat, pulling him into his rock-hard chest. Day hit that solid wall of muscles with a thud and the air rushed out of his lungs. Day put both his hands on God’s huge forearms that flexed against his touch. God bent his head and a few strands of his hair came loose from the elastic band and brushed against the side of Day’s face.

God looked and smelled so fucking delicious, like masculinity and aftershave. Day knew the grip on his neck was not to hurt him, it was to show him who was in charge. His sheer strength and power had Day feeling like he could come right there in the small conference room.

“Oh, so you want to be my bitch?” God’s mouth was at the base of his ear. He roughly ground his pelvis into Day’s stomach while the other hand got a firm grip in his hair at the back of his head. “Why didn’t you just say so? You want me to have you face down and ass up in my truck? Then we can go do that right fucking now.”

God loosened his grip on Day’s hair and let the large hand around his throat turn into a gentle caress. He smoothed down Day’s hair and leaned in and took a large sniff before nuzzling the side of his face. Day couldn’t have stopped the unmanly whimper if he’d tried. God dragged two fingers down his throat and gently stroked his collarbone. His breathing was now even and calm, surprisingly relaxing Day as well.

God kissed Day’s temple before speaking in a seductive whisper against the side of his face. “Or do you want me to put on one of your jazz records and lay your sexy body down on your bed and slowly lick you from head to toe?” God ran a thumb over Day’s parted lips.

“So tell me…which one do you want?”

Day had to figure out how to speak again before he was finally able to reply. “Yes, Cashel. I want you in my bed.”

“Then prove it.” God laid a lingering, gentle kiss on his forehead before stepping back from him and leaving the conference room.

First, I have to say that I loved this story.  It was engaging.  It was dynamic. Two strong men, Leoidis “Leo” Day and Cashel “God” Godfrey, were hot together, in and out of the bedroom as they work together busting drug lords in my favorite town of Atlanta, GA.  Leo was briefly introduced in the beginning of You Can See Me but that is the only connection I see.  You do not have to read You Can See Me in order to enjoy Nothing Special.

While I love the plot line and how Leo and God got together–many times, and in many interesting ways—the flow of the story was not up to par.  There were many typographical mistakes and some of the transition scenes were a little abrupt.  Once such scene, God mentions that Leo went back to visit his first love (Prescott Vaughan, main character of You Can See Me) a couple of months previous.  Leo told Prescott in You Can See Me that that he had been seeing someone for 6 months.  Typically, to me, a couple of months means two to three months.  The references between the books should match.  It was not enough to lose complete focus but it was enough that I wondered if someone had missed some editing mistakes.  Because of this, I give Nothing Special 8 out of 10 pots of gold.

Now, about that surprise twist.  It was actually not that surprising to me based on the way A.E. integrated certain interactions.  Some of them were part of the transitions I mentioned previously that could have been edited better, but I got the gist of them.  I love subtle pokes at future plot lines so I was highly amused when they played out.  I actually smiled while reading when the characters in question settled out.  I’m not going to tell you what happens.  That is for you to find out.  Let’s just say that I enjoyed the happy ending immensely. J 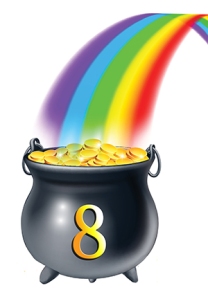 When she’s not clicking away at her laptop, A.E. runs a very successful paralegal-for-hire business, and in her spare time, she devotes herself to her family—a husband and four children, her two pets, a Maltese dog and her white Siamese cat, ELynn, named after the late, great gay romance author E. Lynn Harris.

While this is only her third novel, she has plenty more to come. So sit back and grab a cool drink, because the male on male action is just heating up!

Go to A.E. Via’s official website http://authoraevia.com for more detailed information on how to contact her, follow her, or a sneak peak on upcoming work, free reads, and where she’ll appear next.

As promised: THE GIVEAWAY

The author has TWO prizes to give away, two lucky winners will get either an eBook copy of Nothing Special or a $5 Gift Card to Amazon.

As always, you need to be 18 years or older to qualify, void where prohibited, etc.

And now for one of my favorite quotes in the book displayed in this wonderful art piece by our own Karrie Jax.

9 thoughts on “Blog Tour Stop: Eloreen Moon gives 8/10 pots of gold for “Nothing Special” by A.E. Via”