On Anthologies and Ninjas 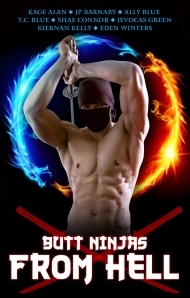 I recently jokingly referred to myself “the anthology queen” online, but the thing is, it’s kind of true. Counting Butt Ninjas from Hell, my work will have appeared in nine anthologies or collections, six of those single-title anthologies. Add on the story I just submitted, and that makes an even ten.

As a reader, I like anthologies because they give me a glimpse into the writing worlds of a variety of authors. For the price of one book, I can sample stories from anywhere from a handful to a dozen of authors, and if I find new ones I particularly like, I can seek out their other work. As an author, I like anthologies because I tend to write shorter stories—I’ve only published one novel so far—and anthologies are a great way to get those stories in front of readers.

The anthologies I’ve been in have included publisher collections and author-driven collections. In fact, just in the past year, I’ve been part of four anthologies that have originated from the authors, not the publishers: Butt Pirates in Space, Butt Ninjas from Hell, and Playing Ball, plus the one that was just submitted (which is still under wraps until contracts are signed). To say it’s been a learning experience would be an understatement. Thankfully, nearly all of that learning has been positive. My fellow authors have been almost uniformly awesome, providing great stories but also working together to choose publishers, develop cover art, write blurbs, and collaborate on promotions.

Putting together an author-driven anthology does take more coordination and effort than publishing individually or submitting to a publisher collection. There’s legwork involved in making sure all the information is collected and submitted on time and that everyone has input on the critical elements. But the extra work is offset by the fun of it. Instead of going it alone, you’re working with friends.

My co-authors on Butt Ninjas from Hell are some of my very favorite people. J.P. Barnaby has become one of my closest friends, Eden Winters and Ally Blue are two of the most warm, welcoming women I know, Kage Alan and Kiernan Kelly know exactly how to make me laugh and smile, T.C. Blue is the most perfect mix of snarky and silly ever, and Jevocas Green is a total sweetheart. And all of them are very talented writers. Seriously, if you ever have a chance to work with any of them, jump on it, because you won’t regret it.

As for what’s coming next from your butt-happy crew? Well, there have been discussions, but anything final will wait until after the ninjas have been set loose. We’ll be gathering at Outlantacon again, and you just never know what might happen then. After all, that’s where this whole crazy idea started in the first place! 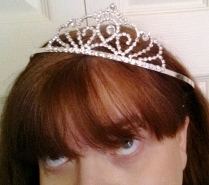 Shae Connor lives in Atlanta, where she’s a lackadaisical government worker for a living and writes sweet-hot romance under the cover of night. She’s been making things up for as long as she can remember, but it took her a long time to figure out that maybe she should try writing them down. She’s conned several companies into publishing her work and adds a new notch on her bedpost each time another story is unleashed onto an unsuspecting universe.

Shae is part Jersey, part Irish, and all Southern, which explains why she never shuts up. You can find her hanging out on Twitter most any time @shaeconnor, but for the more direct route, you can email her at shaeconnorwrites@gmail.com or visit her website at shaeconnorwrites.com.

Clean Up on Aisle Me! by Shae Connor
Sheathing His Sword by JP Barnaby
Twink Ninja Tiger, Flaxen Buns Of Fury by Kage Alan
Twerk It by Ally Blue
Hell Is Where The Heart Is by Eden Winters
Ninja, Vanish! by Kiernan Kelly
The Soldier And The Vagabond by Jevocas Green
A Ninja Walks Into A Bar by T.C. Blue