I want to give a great big thank you to Alex Jones for guest posting today. She is also graciously offering a copy of Death by Water and Serpent as a giveaway.

When I set out to write my Sons of the Sea collection, I admit I had no idea what I was getting into. At the time I was knee-deep in another novel, Rook. My characters face a challenge: they needed to get across an inlet without the benefit of the bridge they’d counted on, and by necessity they ended up on a sea-bound ship. A simple passage across the channel became several days of epic adventure for them, and when the time came for my characters to debark, I couldn’t help but feel sad. In a handful of chapters, I’d fallen in love with the sea. I wasn’t ready to give that up, but for the sake of Rook’s story, my characters moved on.

But I found I couldn’t. The more I thought about it, the more I wanted to explore my newfound interest—the gallantry of the ships, the camaraderie of the crew, the mystery of the unchartered depths. That’s when the idea hit me: I didn’t have to let it go. I could spend as much time there as I wanted!
For those just meeting me, I’ve always had a soft spot for the arcane. I grew up on Arthurian legend and epic fantasy—the love of magic, monsters and myth seeped into blood long before I dreamt of writing my own stories. In my quest for seafaring adventure, it seemed natural to turn my focus to the fey of the sea: sirens, serpents, tritons and sea-wolves are just a few of the beings I poured myself into studying.

I also wanted to give the men in my stories a connection to the sea, not just circumstantial proximity. In the end, it’s what connects them to their mythical lovers. Death by Water became a swashbuckling tale of a corsair pirate and his siren. Serpent became a mythical journey through the arcane magic of the sea. Other tales, yet to be released, became their own journeys of adventure and redemption, all against the backdrop of unchartered oceans and ancient lands.

All the stories in the Sons of the Sea collection can be read as standalone tales, but the current that connects them all is the beauty, danger and magic of the sea itself.

A giant thank you to Rainbow Gold Reviews for hosting me today! Death by Water and Serpent are both on sale for 30% off at AllRomance Ebooks through 5/14, or you can check out the giveaway below to enter to win free copies! For more information about the Sons of the Sea collection, find its homepage here:
Sons of the Sea

Death by Water
James Harkow has his worries—as first mate on the corsair ship Morag Rose, he carries the weight of the crew and a drunkard captain to boot. But when his ship makes port in Rodaley, an unexpected diversion awaits him. A mysterious sailor by the name of Castor captures his eye, then his heart as a single tryst becomes a lasting friendship.

But there’s more to Castor than meets the eye. He pulls Harkow deeper with every kiss, all the while denying the end he knows must come—the true reason he lures his lover out beyond prying eyes to the shore of sea. Torn between his growing love for Harkow and hunger for the soul he must take, Castor risks all to reveal the truth. In that moment, both men strike a deal for the other’s lives: nine years together as comrades and lovers, before the sea takes the soul it’s owed.
Nine years later, the debt comes due. And if Harkow wants to keep the love he has found in his siren’s arms, he must fight the very sea itself. 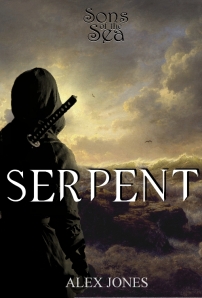 Serpent
Bastian spent many years on the shore of the sea, salvaging trinkets and watching for storms. He learned long ago to hide from the thunder, the lightning and merciless rain. But on that evening when the storm came rolling in, something kept his feet from running. Battered by the current, he is thrown into the sea only to be rescued by an unlikely savior—a serpent who becomes a man.
Mareas, he is called: son of the sea itself, and patron of lucky fortune. Mareas brings magic into his life, waking powers Bastian never knew he possessed. Under the guidance of Mareas, the young sea mage begins learning the truth of what he is capable, while yearning for more than friendship from his mysterious fey visitor.

But Mareas guards a dangerous secret. When the truth of his tragic past descends, it is he who must rely on Bastian’s magic to save them from the storm.

Review for Broken Wings also by Alex can be found here:

Alex Jones will generously provide an eBook copy of “Death by Water” or “Serpent” (winner´s choice) to two lucky commenters!  You need to be 18 years or older to qualify for this giveaway. The winner will be chosen by random.org after the contest ends May 19th, 2014 11:59 PM CDT

13 thoughts on “Guest Post by Alex Jones with a giveaway”