This book was provided free of charge for an honest review. 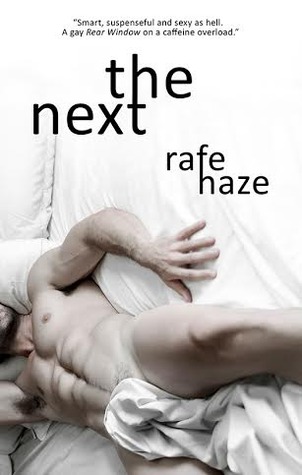 Romantic Suspense novel, often called The Gay Rear Window. A romance springs to life as two strangers merge with a common goal: to catch a killer they suspect occupies one of the apartments across the courtyard. But their romance must hurdle the main protagonist’s suffocating, unresolved demons as well as encroaching, life threatening danger. But if they make it through, they can both bring life back to their lives. The Next romances Love, Alfred Hitchcock, and New York City in large, creamy dollops.

Totally love the cover for this book, and this alone drew me to the book even without reading the blurb.

From the blurb you know the main character is agoraphobic,  but this isn’t obvious untol later in the book.

He has many demons to fight from his childhood, and as the story unfolds you really feel his emotions. He assumes Marzoli has led the privileged life – but pardon the pun – don’t judge a book by its cover…..

The budding relationship with Marzoli shows that they both have to fight their demons, but both are hesitant in what to do, but what does become apparent is that together you can fight the demons better.

The descriptions given for the other tennants will have you smiling but also gives you a clear picture in your head of what everybody looks like.

The book was hard for me to get into, but once I was I was hooked. As you read you assume as the characters do who is the guilty party but then comes a total twist in the plot.  This book also wasn’t the usual sex in every chapter book, which I found made the book more realistic.  Other books I have read have them having sex anywhere and everywhere.

I have to admit to hating the main character to begin with, but as I read further into the book my opinion of him changed for the better.  Marzoli I loved from when you first meet him.

I would love to read a novella on these two,  to show what happens to them in a couple years time…. are they still together or did they drift apart?…

I shall take a look at other books by this author and will read another of his.

Rafe Haze was raised in the San Francisco Bay Area and lives on the west side of New York City. Having worked for the legal compliance industry, fashion industry, music industry, art industry, and flesh industry (the most interesting people on earth have), his most life-changing employment was teaching Meisner Technique of Acting. He wrote himself out of one whopping funk with his debut novel The Next, and is ecstatically thankful for the entire, messy, beautiful cadence.  Rafe refuses to be handcuffed to one discipline only: he writes classical music for orchestra and small ensemble, country music songs, musical theater, plays, screenplays, and digs two-stepping, line dancing, and West Coast Swinging. Be it words, notes, or movement, the emotional origin, schlep, and endpoints are equally compelling and satisfying. Rafe is grafeful to his twin brother (the straight one) who continues to make the slicing through this rambling, thorny life worthwhile.

3 thoughts on “The Next by @RafeHaze #LGBT #Review”