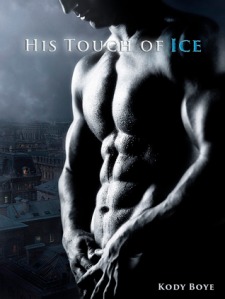 After being kicked out of college due to false claims of plagiarism, Jason’s life has taken a turn for the worse. Swamped with student loans and unable to pay rent, he is literally at his wit’s end when he meets Guy Winters. Everything about Guy is fascinating: his lifestyle, his appearance, his generosity. So when Jason faces potential homelessness, he agrees to move in, but it isn’t long before he realizes that Guy seems different. He’s vague about where he works, the temperature is always freezing in his home, and his touch renders Jason breathless beyond what any passion should.

After a home invasion leaves a man dead, a horrifying truth comes to life. Guy isn’t human, and another of his kind is in Austin, leaving trail of bodies in its wake that frames both men for murder. With Jason’s fingerprints in the apartment and a gunshot that will have sent the police department scrambling, there’s no time to explain. The only thing they can do is run.

The cover of this book is eye catching and the title keeps you wondering. They both fit the book perfectly.

I had high expectations when I started this book. The begining was good, we got to know a little about the MC’s, the sex scene was very hot and fit in to the story well. Then I got very confused, we had a break in, a dead guy and then the MC’s run. We find out Guy isn’t all human, I loved the different take on the paranormal world. Some things were explained the more I read but others were not. I was left wanting more.

I do have a few issues with this book. The main one is the ending, it didn’t end. This is fine if another book is coming out if not i’m left wondering WTH.

The author has a very good writing style which made the book easy to read. I will be reading more from this author in the future.

Born and raised in Southeastern Idaho, Kody Boye began his writing career with the publication of his story [A] Prom Queen’s Revenge at the age of fourteen. Published nearly three-dozen times before going independent at eighteen, Boye has authored numerous works—including the short story collection Amorous Things, the novella The Diary of Dakota Hammell, the zombie novel Sunrise and the epic fantasy series The Brotherhood Saga.

This book was provided free of charge for an honest review by the author. 😉