This book was provided free of charge for an honest review.

Why I read this book:  When I read the blurb, I thought this sounded like a really good read. 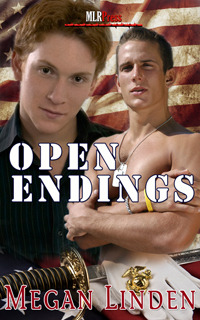 A man walks into a recruitment office… and nothing goes according to plan.

Matt Holston, soon-to-be college graduate, tries to figure out what to do with the rest of his life. One of his ideas? US Marine Corps. But when he goes to the recruitment office to learn more about a possible military career, he meets a guy who is a complete opposite of what Matt imagined a recruitment officer should be.
Cole Perry had suffered PTSD after his second tour overseas and now he just wants to get to the end of his contract. Transferred from his old unit, he’s a glorified office clerk, as he calls himself, but what he’s definitely not is a guy who would help anybody make the same mistake he did.
So what makes Matt come back to see Cole again if not the spiel about serving his country?

Cover:  I like the cover, as this gives you a image to hold in your mind as you read the book.

I read the blurb for this book and was I so have to read this book. My only disappointment was that it was a short story, which I didn’t notice when reading the blurb.

Mathew is at a crossroads in his life, currently still living at home with his mother and stepfather before he graduates from College. Cole is another matter, he is a marine, who is currently suffering from PTSD, and because of this is a glorified office clerk.

When Mathew and Cole first meet, both feel an attraction, but both are hesitant to act on it.  Mathew comes across as very shy, but part of this is due to his home life.  Cole is reluctant to persue a relationship due to his PTSD.

It was lovely to see their growing relationship, taking it one step at a time, and Mathew surprised me by being very understanding of Cole and what his PTSD meant. Both men seemed to be able to read the other straight away, so the book was a very enjoyable read.

I only wish that it was a few pages longer, as it seemed to me that the end was a bit rushed, and I would have loved to have read some more of how their lives shaped up the longer they knew each other.