Book Blurb: Ryder Daniels has spent the last year recovering from rejection: his parents couldn’t accept his sexuality and his lover chose drugs over his love. The only bright lights in his life are his younger brother and his rescued pit bull. But now his mother’s punishment for his lifestyle has cut him off from his brother he loves so deeply. Devastated, he throws himself into the work of the Pit Bull Foundation he and his friends started.

Jason Mallory can no longer hide the dissatisfaction of his relationship with his longtime girlfriend. When her marriage ultimatum pushes him to break things off, he’s determined not to jump into the dating scene. But when a group of injured pit bulls are found on his construction site, he can’t forget the guy who shows up to help.

After Jason adopts one of the dogs, he and Ryder become fast friends—until one night, Ryder lets down his guard and Jason recognizes his desire. Soon, they can’t deny the passion between them but will family differences and ugly prejudices keep them apart, or can they fight to prove that love is precious, no matter the flavor? 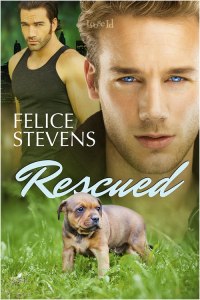 Author Bio: Felice Stevens has always been a romantic at heart. She believes that while life is tough, there is always a happy ending just around the corner. She started reading traditional historical romances when she was a teenager, then life and law school got in the way. It wasn’t until she picked up a copy of Bertrice Small and became swept away to Queen Elizabeth’s court that her interest in romance novels became renewed.

But somewhere along the way, her tastes shifted. While she still enjoys a juicy Historical romance, she began experimenting with newer, more cutting edge genres and discovered the world of Male/Male romance. And once she picked up her first, she became so enamored of the authors, the character-driven stories and the overwhelming emotion of the books, she knew she wanted to write her own.

Felice lives in New York City with her husband and two children and hopefully soon a cat of her own. Her day begins with a lot of caffeine and ends with a glass or two of red wine. She practices law but daydreams of a time when she can sit by a beach somewhere and write beautiful stories of men falling in love. Although there is bound to be angst along the way, a Happily Ever After is always guaranteed.

One thought on “‘Rescued’ by @FeliceStevens1 #LGBT #ReleaseDayBlitz”