Why Bethany read it: I have read all of Toni Griffin’s Holland Brothers series so when we had the chance to read and review Liam in exchange for an honest review, well there was no way I was turning that down.

Why Tanja read it:Not long ago I read Forbidden Mate (Holland Brothers #4) by Toni Griffin were we get to know Liam and the Atherton Pack. After I finished the book I wanted to immediately start with Liam, only to see it was not available at that time. So I jumped up and down as Liam was offered to RGR by the publisher, free of charge, in exchange for an honest review. Naturally I grabbed it for reviewing :). 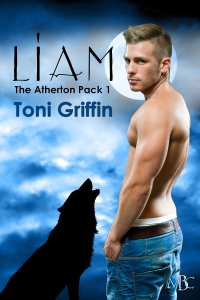 After a long night at work, all pastry chef Declan Morgan wants to do is have a run before he heads home to bed. His peaceful lope through the forest turns into a nightmare when he witnesses his Alpha kill a pack member in cold blood. Now Declan is on the run from the very people that should be protecting him.

Liam Anderson has never minded all the travel that comes with his position as a Beta to the Pennaeth Alpha. He’s used the time to search far and wide for his mate. He never expected to find the man naked and scared on his back porch.

Liam’s overjoyed at finally finding the one man fated for him, now if only he can get Declan to open up and trust him with the secrets he carries.

Please Note: This is a re-edited second edition. The only changes made were edits.

I fell HARD for Liam in the last Holland book, and was super excited to get his story.  What I loved about this one is, it was short and sweet, which was exactly what I was looking for.  And I absolutely adored Declan.  The heat between the two is amazing.  Yes I know its the whole “mate” thing but Toni writes it very well.  Yes it happened fast, but I don’t care, that is what I was in the mood for, so it worked really well for me.

My issue though is if I left my brother behind I would be doing everything to get him with me to make sure that he was safe.  I was also a little baffled that Liam didn’t push a little harder to find out what caused his mate to end up at his doorstep naked as the day he was born.  Yea I would have been pushing for answers.  I was also a little upset that Declan didn’t ask for help sooner, cause your mate is the person you can trust above everyone else.

But that did little to damper my love for this book, it only wet my whistle and made me want more.  More like Bens story.  So if you want something short, hot & fun, well this is the book for you.

Declan witnessed his Alpha killing another member of the pack in cold blood. He literally runs for his life, leaving his brother behind. His flight brings him to the Atherton pack and on the porch of his mate Liam.

Liam, who was looking for his mate his whole life, was of course overjoyed to finally have found him….naked on his porch. He ushers Declan in his house and that´s when it got weird for me. I mean, I understand the whole mate concept, so I didn´t question Liam´s decision to let Declan enter his house. Also not that he wanted to give Declan some time before he asks what happened, but the questions never came. WTH??? I would like to know what exactly went down, why my mate had to flee his old pack and so on. Nope, nothing, just those two enjoying themselves as mates because they are going to talk about what happened with the alpha of the pack anyway. I seriously got tired about reading that Liam is Declan´s mate and that´s the reason he behaves like he does and vice versa.

Declan witnessed a murder for heaven´s sake. You would have thought he suffers from some, don´t know aftereffects, maybe some nightmares…anything. Um, no not really. There was one time were something was told to me not shown. I was disappointed with it, because I know this author can write about characters who have experienced some terrible things and the aftermaths of it.

I really liked the interactions between Declan and his new pack. They seem to be a fun bunch to be around. I would have liked to see more about that or some of the investigations regarding what happened in Declan´s old pack. Sadly the showdown of this book felt rushed but at least we get to see Declan´s brother again.

Altough I could have done with less of Liam and Declan´s declarations of being mates I liked them both. I just wish that there were a little more storyline to go with it. For me, it felt what happened to Declan was more an afterthought, a side note, not something important. Nonetheless I´m hooked to this author´s shifters and I´m looking forward to read Ben, the pack alpha´s story.

Toni Griffin lives in Darwin, the smallest of Australia’s capital cities. Born and raised in the state, she’s a Territorian through and through. Growing up Toni hated English with a passion (as her editors can probably attest to) and found her strength lies with numbers.