Xavier makes a lot of people nervous. The rest, he flat-out scares. More than his hulking, tattooed body, it’s his predator’s gaze that makes people feel vulnerable, as if he had the power to read their thoughts and see their soul. For his lovers, it’s Xavier’s ravenous appetite for all things carnal—for the taste of flesh under his tongue and the feel of a trembling body under his control, for whispered pleas and muffled cries—that makes him dangerous.

But recently, driven by a festering rage against the men who attacked his sister a decade ago, Xavier has developed a taste for a different kind of hunt and conquest: stalking men who do truly bad things and punishing the predators he sniffs out. The problem with vigilante justice, though, is sometimes the man in your trap is innocent.

Carson suspects he’s playing a risky game with dangerous men. But the lies are convincing, especially when they’re slipped to him among hundred dollar bills. He never guessed how big and dark the secret hidden under all the lies and money could be. And he has no idea he’s not the predator, but the prey, until it’s too late.

And you can’t beg for mercy when there’s a gag in your mouth.

But when Carson escapes from Xavier’s trap, he’s forced to accept that Xavier is far from his most dangerous enemy. Xavier may even hold the key to overcoming the painful past that has kept Carson prisoner for almost two decades.

When Xavier moved in, Carson struggled against the restraints. “Fucking . . . Come on. This shit’s not funny anymore.” Pleading gaze upturned from under his dark lashes.

He breathed in the smell of him. Nervous sweat rising over the scent of soap. He caressed his cheek.

Carson went dead still, then tried to mold his frightened expression into sternness. “You could go to jail for this.”

Carson’s whining was getting on his nerves. Xavier lifted the lid on the chest of dark brown leather and took out the ball gag. Too funny, that perplexed expression on Carson’s face, then horrified incredulity as he figured it out. Sitting on his thighs, gazing into those shimmering blue pools of terror, Xavier got it on him before he could complain much more.

“But the thing I really love about the gag is, it’s so much easier to get to know someone when they’re being quiet. Just watching their face. Looking into their eyes. Without a bunch of blah, blah, lies, blah, blah rationalization to muddy the truth.”

Growing up near Los Angeles, I spent much of my time frolicking in the Pacific Ocean and penning angst-twisted poetry. Now I’m living in sunny Spain writing pathos-riddled fiction.
I’ve always loved the music and substance of words, always loved writing in well-worn notebooks by hand, tapping at the keys of the computer, and, of course, conjuring up stories.

And from my earliest memories, I’ve always been fascinated—maybe obsessed?—with sex and sexuality.
In my writing, sex is the medium, the expression, and the tool of discovery for my characters’ insecurities, the needs that drive them, the comfort they can’t live without, the joy and relish of life that makes each of them intense, strange, and alluring. 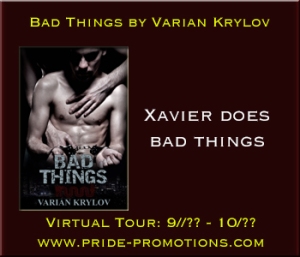 I would like to give a big Thank You to Varian Krylov and Will at Pride Promotions for letting us take place in this tour.