Read Andrew Grey’s Guest Post about Inclusion and win an eBook of his ‘Senses’ series. Details below.

Bethany will post her review of ‘Love Comes Silently’ (Senses 1) today and will post the review of another book in the ‘Senses’ series each Wednesday for the next three weeks.  The first three in audio versions and book 4 in ebook format.

Andrew Grey talks about Inclusion in his Books

One theme that is very important to me is that everyone deserves to seethemselves in a book.  There are plenty of gay romances that show gay men in every profession possible.  However I feel it’s equally important that other members of our community are represented.  This means gay men who are blind, deaf, in wheelchairs, and mute to name a few examples.  As a kid and a writer to be, I was blessed with family friends who had survived polio, but got around using wheelchairs or braces and crutches.  I met people who were deaf and blind.

My grandmother was a very progressive woman.  She was a successful career woman at a time when women rarely worked outside the home.  One of her friends had a grandson who was deaf.  He could read lips and we played together as children sometimes.  I was young and can barely remember him, but I do remember that it didn’t matter.  We had fun and figured out our own ways of playing.  I think it was that experience that showed me very early in life that people are people and a difference (I hate the term disability)  is largely irrelevant to the person inside.   And I hope that attitude comes through in my stories.  Everyone deserves to find a great love, someone who will care for them above all others, regardless of outward appearances for challenges.

I myself am not blind, deaf, mute, or in a wheelchair and I’m asked repeatedly how I can write characters that seem so real.  I’m told over and over that I must do a great deal of research because I get the details right.  I do research, but as a writer, one characteristic that’s essential is empathy.  You must be able to place yourself in someone else’s shoes, at least for a while.   Actors often have methods to get into character, I do the same when I’m writing.  Early on I wrote a character who raised sheep and goats for wool and milk.  I refused to eat lamb.  When I was writing Love Means… No Boundaries, I listened to violin music over and over, blind folded so I could in some way feel what Robbie felt.  With Love Comes Around, I pulled on what I learned from a childhood friend whose parents died and he was raised by relatives.

I never thought about all the experiences I had as a child being significant, but it turns out they all helped turn me into the writer and storyteller I am today.

Caring for a loved one with cancer is tough. Doing it alone is overwhelming—especially when that loved one is a child. But ever since Ken Brighton’s partner left him, Ken has spent his days at the hospital with his daughter, Hanna, hoping for a miracle. Maybe the mysterious care packages that appear for Hanna don’t qualify, but they bring a spark of hope into his and Hanna’s tired life—and so does Ken’s neighbor, former singer Patrick Flaherty.

For two years Patrick hasn’t been able to focus on anything but the life he should have had. An injury robbed him of his voice, and the idea of introducing himself to new people intimidates him. But over the past months, he’s watched as his neighbor nursed his sick child, and once he meets Ken, Patrick starts to crave a life with him—a life he isn’t sure he can have.

Ken doesn’t realize he’s fallen in love until the doctors send Hanna home, saying there’s nothing more they can do: Hanna will either recover or succumb. Ken’s heart is set on a new beginning—with both Patrick and Hanna. But Patrick’s silence leaves Ken wondering what Patrick wants. 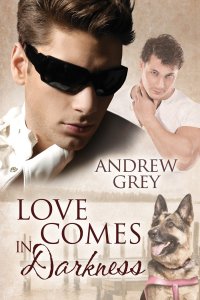 Howard Justinian has always had to fight for his freedom. Because he was born blind, everyone is always trying to shelter him, but he’s determined to live his life on his own terms.

When an argument with his boyfriend over that hard-won self-reliance leaves Howard stranded by the side of the road, assistance arrives in the form of Gordy Jarrett. Gordy is a missionary’s son, so helping others is second nature—and he does it in such an unassuming manner that Howard can’t say no.

Life is barely back on track when Howard receives shocking news: his sister died, leaving him her daughter to care for. Howard now faces his greatest challenge yet: for Sophia’s safety, he’ll need to accept help, but will he learn to accept it from Gordy, the one man who will not curb his independence?

Tom Spangler is used to getting what he wants. When Greg captures his attention, he asks Greg for a date. They have a good time until Greg gets a call from the friends watching his son, telling him Davey has fallen. Greg and Tom return to find the worst has happened—Davey can no longer see.

With so much going on in his life, Greg doubts he’ll see Tom again. But Tom has researched beep baseball, where balls and bases make sounds to enable the visually impaired to participate in Little League. Tom spearheads an effort to form a team so Davey can continue to play the game he loves. But when Greg’s ex-wife shows up with her doctor boyfriend, offering a possible cure through a radical procedure, Greg must decide how far he’ll go to give Davey a chance at getting his sight back. 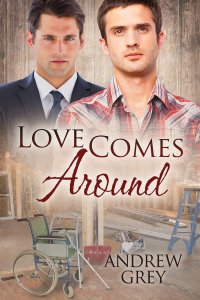 Dan was a throwaway child and learned to take care of himself in foster care. As an adult, he devotes his life to the business he started and his heart to raising children no one else wants. Dan has already adopted six-year-old Lila, who walks on crutches, and then decides to adopt eight-year-old Jerry, who suffers from MD and is confined to a wheelchair.

Also abandoned as a child, Connor ended up on his own and retreated into himself. He works as a carpenter and woodcarver and is the perfect man to ensure Dan’s home becomes wheelchair accessible.

When Dan hires Connor, neither of the men are ready to open their hearts to the possibility of love. As they learn how much they have in common, both of them must weigh the possibility of family and a future against the risks of getting hurt again.

Andrew grew up in western Michigan with a father who loved to tell stories and a mother who loved to read them. Since then he has lived throughout the country and traveled throughout the world. He has a master’s degree from the University of Wisconsin-Milwaukee and works in information systems for a large corporation. Andrew’s hobbies include collecting antiques, gardening, and leaving his dirty dishes anywhere but in the sink (particularly when writing) He considers himself blessed with an accepting family, fantastic friends, and the world’s most supportive and loving partner. Andrew currently lives in beautiful, historic Carlisle, Pennsylvania.

Comment on this post to win an E-Copy of any one book of Andrew Grey’s ‘Senses’ series.

You need to be 18 or older to participate in this Giveaway. Void where prohibited. Etc.

Check out the review for book one here: Love Comes Silently