We have the great pleasure of welcoming Alexa Milne to our blog. She is a brand-new author and today, her brand-new novel is available for pre-sale. Let’s all say ‘Hi!’ and ‘Welcome!’ and check out her hot, rugby-themed M/M story 😉 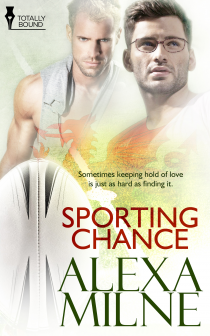 Sometimes keeping hold of love is just as hard as finding it.

Dan and Iestyn are looking for romance. A school trip, a love of history, a wedding, a tango, the game of chess, and their friends and family all help the two men to realise that they’ve finally found true love with each other.

Iestyn thinks that he’s completely ordinary and that Dan is the only out and currently gay rugby player anywhere. Being gay can be difficult enough. Being famous also has its problems. But being gay, famous and a sportsman can make finding love complicated. So when Dan Morgan meets Iestyn Jones and gives him his phone number, their road ahead has more than a few bumps to overcome.

Will Iestyn and Dan overcome the obstacles thrown in their paths? Or will fame destroy their lives as well as their love?

On July 9th, 2009 at around 9.45 pm a new writer was born as a beloved fictional character died: Welcome, Alexa Milne!

Today is a big day for me as my first novel, Sporting Chance, is available for early download at Totally Bound. Just writing that makes me terrified and excited in equal measure. Marc kindly offered to let me introduce myself to his readers on Rainbow Gold Reviews, so here I am.

My name is Alexa Milne. I reached half a century a little while back, I have red hair which is fading a bit now, I love sci-fi programmes and football, oh, and I like writing about men meeting each other and falling in love.

Well, that was quick and easy, but sort of sums me up. Okay, here’s a little bit more. I’ve always told stories, from inventing my own version of the gang from Scooby Doo with my dog, Prince, to bringing history to life for thirty years in the day job. I’m also rarely without something to read. I can remember the first time I cried reading a book. I was eight, reading Black Beauty in bed on a Saturday morning, and Ginger had just died. My mum found me weeping buckets. I’ve cried over a few books since then and laughed at a few as well.

Is it bad to say I’d always been fascinated by stories involving men falling for men? However, so many of them had sad endings. I’d read gay fiction in the past, long before the invention of the Internet, but there was never enough, and it was pretty hard to find. There used to be a book shop in Manchester that stocked GMP novels and I read them all. I watched films like My Beautiful Laundrette, Maurice and A Beautiful Thing, as well as some truly strange offerings in the infamous Channel 4 gay season, labelled with a pink triangle.

That brings me to writing and what made me start. On 9th July, 2009 at around 9.45 pm someone died. This was not a real person; his name was Ianto Jones, and he was one of the leading characters in Torchwood, a BBC science-fiction programme created as a spinoff from Doctor Who. The main character was Captain Jack Harkness; I’d fallen in love with him when he made his first appearance and uttered the words, “excellent bottom”. Jack and Ianto were lovers. You’ve got to understand this was a programme on BBC1 at 9pm, the top slot, and the story wasn’t about them being gay, it was about the Earth being attacked by aliens. I loved Jack and Ianto, and then they killed him, just like that. I read some Torchwood books and thought, somewhat stupidly, I could do that, and I did, and I didn’t stop. I fell in love with writing fanfiction and with reading it. I posted on a variety of sites and amazingly people commented. I made online friends, who still support me and my writing. I didn’t really think I was writing m/m romance, I was just writing about two men who kept falling in love in a variety of stories.

After a few years, some of my fellow fanfiction writers had branched out into writing original stories, so, inspired by their success, I decided to try my hand at writing original stuff as well. I began writing a story in my spare time that I called Sporting Chance. It took me three years to finish it, scribbling early morning, late at night and during holidays. It’s set in Wales because they say write what you know and I come from a town just along the coast from Cardiff. The main characters are Iestyn, pronounced Yest-in, a teacher and Dan, a rugby player. Most people know how passionate the Welsh are about rugby and I’m no exception. It’s a story about falling in love, about friends and family, and about keeping love when you find it. I will admit I was the child who experimented with washing powder in the wind. Writing has now become my full time job – sometimes it’s a joy and sometimes it’s very hard work, but it is totally addictive.

So thank you Russell T. Davies – I wouldn’t have said that at the time, but killing Ianto Jones led me to here. Now, if you ever fancy making a drama about a gay rugby player who falls for a teacher, I know a good story you could adapt!

Originally from South Wales, Alexa has lived for over thirty years in the North West of England. Now retired, after a long career in teaching, she devotes her time to her obsessions.

Alexa began writing when her favourite character was killed in her favourite show. After producing a lot of fanfiction she ventured into original writing.

She is currently owned by a mad cat and spends her time writing about the men in her head, watching her favourite television programmes and usually crying over her favourite football team.

Comment to WIN a SIGNED PRINT COPY of the book as soon as it is available on November 7th.

(Or an eBook copy of- or voucher for the book if the winner prefers a digital copy, instead)

You need to be 18 or older to participate in the Contest. Void where prohibited. Etc.