Marc reviews the audio version of Lynn Flewelling’s ”Traitor’s Moon’  (Nightrunner Book 3) (The book was re-published on December 23rd 2010 by Spectra and is 569 pgs long. The audiobook version was released on April 15th, 2005 by Blackstone Audiobooks and is narrated by Raymond Todd, it is 21 hrs and 58 mins mins long.

Why I read this book: Book one was one of the very first books with LGBT characters I ever read. I discovered there were books with LGBT content (M/M, gay fiction and fiction with gay characters) and looked at the lists Google referred me to. Being a big Fantasy fan, I eventually stumbled upon the Best Fantasy Books with Gay Main Characters list on Goodreads and it was impossible for me not to give this book a try, especially when I realized there were audio versions of the book. So I of course had to buy the audio for book two and beyond and loved them even more, devoured most of this series back-to-back. Warning: This series may cause a series addiction to this world and these characters 😉

I will post reviews of all the books in this series during this week, so keep on the lookout for them. Please also check out my interview with the author HERE! 😉 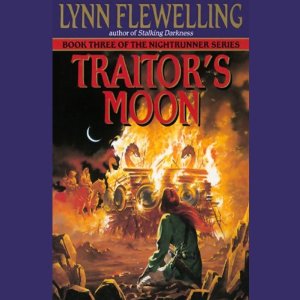 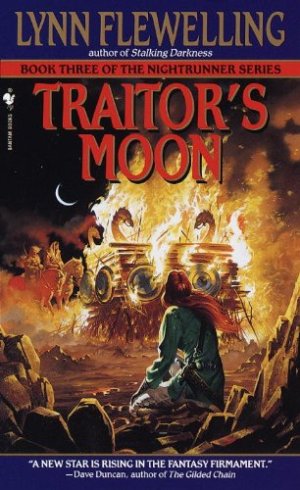 Seregil and Alec have spent the last two years in self-imposed exile, far from their adopted homeland, Skala, and the bitter memories there. But their time of peace is shattered by a desperate summons from Queen Idrilain, asking them to aid her daughter on a mission to Aurenen, the very land from which Seregil was exiled in his youth.

Not my favorite cover in the series and I think there are scenes that wuld be more visually stunning, but the scene displayed is important and beautifully rendered.

Traitor’s Moon is a perfect title as it foreshadows, ties the book in with the last and sounds great and intriguing 😉

As with book one, this is fantastic narration and it helps to pull the ‘reader directly into the story. The differentiation of the characters is well done in a way not every narrator is skillful enough to manage and the audio version is well-worth the purchase 😉 This is the last of this series with this narrator.

And now we get to my personal favorite in this series 😉

At the end of book two, Seregil and Alec became a couple. Now they have to adjust to their new dynamic (though it has been two years for them since the previous book and their relationship is somewhat established) and overcome grief and heartache that still follows them from the events of the previous book.

Even if you run from heartache and memories, the past will always catch up. They are both loyal to the queen and sworn protectors of Skala, so when an urgent need for them arises, they can’t refuse.

Seregil has been a very mysterious character with a past readers could only guess at. Their new mission sends Seregil and Alex right into the homelad he has been exiled from. Seregil has to confront his family and past and help convince the clans of Aurenen to not only listen to the queen’s daughter, but accept her proposal.

The most fascinating thing about this novel and the reason it’s my favorite among the 7-book series is the new and rich culture the author introduces us to.

Aurenen is a completely different world with it’s own culture and traditions. It feels strange and foreign and exploring it was a great pleasure. There are dragons, holy sites, magic, different, independent clan and while Auranen seems much more democratic and cultured than the human realm, deceptions and betrayal are everywhere.

The political machinations in this world work differently and were very exciting for me to follow as new information of the story was revealed and the outcome remained unsure. While a big war continues to be fought’at ome’, this diplomatic mission might mean success or failure, loss or victory.

Even far off the Skalan shores, our heroes are chess pieces in a bigger game and the forces of Skala, Aurenen and Plenemar all have different intentions with them. No wonder that loyalties are tested and betrayal is imminent. in their hands rests the hope for the possibility of peace.

It needs to be mentioned that some smaller, but interesting and well-developed side characters become much more important in this book and new characters are introduced, who will have a lasting effect on the series. The author takes her time to test them and to develop them further and having read all book of the series, these are some of the characters that will stay in readers’ hearts the most and have become special to fans.

It should also be mentioned that there is also some of that classic nightrunning, just in a different place and a different way. 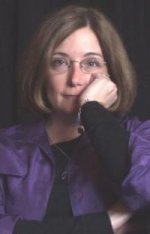 Lynn Flewelling grew up in Presque Isle, Maine. Since receiving a degree in English from the University of Maine in 1981, she has studied veternary medicine at Oregon State, classical Greek at Georgetown University, and worked as a personnel generalist, landlord, teacher, necropsy technician, advertising copywriter, and freelance journalist, more or less in that order. She currently resides in sunny southern California with her husband Douglas and two naughty dogs.

She is the author of two internationally acclaimed series: The Nightrunner Series and the Tamír Triad. Her books have been published in a dozen countries, including Japan and Russia.