Each book is a short story and can stand alone but are best read as a series.

This book was provided free of charge for an honest review by the author. 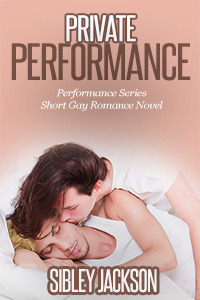 Jason had sworn to never care for a guy again before taking it slow and easy when it came to the relationship department. He’d chosen poorly once. By the time he walked away his self-esteem had been in shreds.

Z is a dynamic, sensual rock star in the making. His band is hoping to hit the big-time and they’re getting close. He realized long ago his lifestyle had no room for a long-term relationship.

Then Z plays at Boys Will Be Boys, a popular gay club for a charity event, and Jason has a front row table. When their eyes meet it seems destiny has other plans for the two young men. Both tell themselves it can’t work out. They should just enjoy one night of hot sex and move on.

But love insists on entering the scene, just when neither is looking for it.

I fell in love with this book cover, so very sweet.

This is the first book I have read by this author, I found the short story very easy to read, a great start to a new series. Even though this is a short story there is such a lot of detail included. I would of liked it to be longer as I was enjoying reading it, the authors writing style was good.

Jason and the up and coming rock star Zeke aka Z eye each other across the room, lust at first sight. Jason tells himself he just wants a bit of fun as he has been hurt in the past.

The sex is hot, the characters are different but interesting, I will be interested to see where the next short story goes and if its the same characters.

Overall a nice story of lust, sex and hope for more. I definately want to read more in this series.

Sibley Jackson is the pen name that author Caddy Rowland uses when writing gay m/m romance. After three years of writing drama, psychological thriller, historical fiction, and family saga Caddy wanted to expand into romance, but preferred writing gay m/m. Since her books have always been GLBT inclusive, some with gay main characters, it was a natural progression.

Although she was familiar with writing gay fiction, writing m/m romance—which is primarily read by females—offered new challenges. Sibley strives to make the characters read like real men, yet she makes sure the romantic thoughts and feelings women love to read about are also there. Additionally, the sex scenes are hot and explicit, tending more toward how two men communicate when having sex, instead of a man with a woman.

Sibley plans on writing at least four books in her first series (The Performance Series). She will then write other gay m/m romance series, hoping to give readers of that genre an exciting and rewarding storyline with male characters who are men, instead of one being simply “a chick with a dick”.