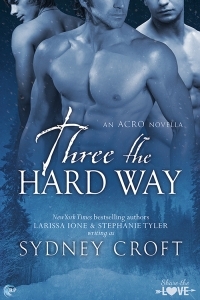 Twenty percent of all proceeds from the sale of Three the Hard Way will be donated to the It Gets Better Project.
The It Gets Better Project’s mission is to communicate to lesbian, gay, bisexual, and transgender youth around the world that it gets better, and to create and inspire the changes needed to make it better for them. Visit their website for more information and to find out how you can get involved: http://www.itgetsbetter.org/pages/about-it-gets-better-project.

Why MtSnow read this book:

Back when I was reading mostly M/F romance I had been introduced to an interesting sounding action-packed paranormal series full of kick-ass women and alpha males written by the dynamic duo of Stephanie Tyler (a.k.a. S.E. Jakes) and Larissa Ione writing as ‘Sydney Croft’. I was just getting ready to dig into this particular series when I found M/M romance, and I really haven’t had the chance or even the desire to revisit M/F romance for a couple years. Well, when this title came across our paths in exchange for an honest review, and I realized it was part of that ACRO universe, including THREE male characters in a possible ménage, I was like ‘YES!’. And the fact that the proceeds benefit the charity ‘It Gets Better Project’ made it even more appealing.

Blurb:
This title is part of the ACRO universe.

Lovers Taggart Brody and Justice McKinney possess special abilities that make them valuable to agencies who employ—or enslave—people with extraordinary talents. When tragedy tears them apart, Justice finds purpose working for the good guys: ACRO, the super-secret Agency for Covert Rare Operatives. But he never forgets Taggart or the past they once shared.

Heartbroken, Taggart runs from who he is . . . right into the arms of Ian Bridges. But Ian, battling his own demons, betrays Tag to the terrorist organization Itor. After months of torture, Tag manages to escape, but kills an ACRO agent in the process.

With nowhere left to turn, Tag disappears into the Alaskan wilderness, but it’s only a matter of time before his enemies track him down. He reaches out to Justice, and somehow Ian finds him too, hoping to right his wrongs. With ACRO and Itor both bearing down, the three men must figure out how to forgive, how to work together, and how to love each other—or the coming battle will destroy them all.

This story started off with us being told about a falling out between two young men that had grown up together, having lived in a commune-type setting with both their single mothers. These guys seemed to be the love of each other’s lives and it just broke my heart that they weren’t together, and it takes quite a bit of unfolding as to why they aren’t together.

THEN we are introduced to a third person that evidently is a member of an opposing organization who was there for the fallout. The fact that they all three end up in the same remote location makes the reader wonder if it’s a setup, or just a fluke coincidence. As we go through the events that happen to these men we find out more about the secret organizations ACRO and Itor, two opposing agencies that ‘use’ people with ‘special’ abilities. Which one is good and which one is bad, and which do these men actually represent?

It definitely kept me on my toes, and even with the ‘menage’ aspect, it didn’t have much in the way of explicit sex scenes, even though there was quite a bit of innuendo and teasing going on. I did find myself wishing for more of a fleshed-out background on every character and realize it’s part of a series, but you get the impression that even having read the other 6 books previous, you wouldn’t have learned more about these three. It was written so it could be read as a standalone and, in my personal opinion, it felt too short as a novella, but it does make the reader curious about the rest of the series.

This story read as a small continuation and tribute to the rest of the series, and it was nice to see LGBT characters accepted in this universe. It even had a bit of Christmas in the end, and would make a sweet, short holiday read that also benefits a wonderful charity for LGBT youth. Give it a try! Think you might like it 🙂

The authors behind Sydney Croft live in different states and communicate almost entirely through email, though they often get together for conferences and book signings.
Stephanie Tyler
Larissa Ione