The story explains the pain and suffering of those around him as his secrets unfold and honesty rises up. The torture endured as Jack struggles to piece together the complex story of his own sexuality is truly moving. Escaping the shame, Jack flees to Bangkok with his gay lover where a much greater world of deceit and discovery awaits them both.

Click HERE to read our review of this book

I had the great honour of Interviewing the Author J. James. He has also generously offered to give 3 lucky winners a Paperback Book of Denial, Deceit, Discovery. Giveaway posted after the interview.

Q. What made you decide to write you book at this time? Was it difficult for you to write?

A. I had been requested by the priest dealing with my annulment to write a small piece explaining what had led to the breakdown of my marriage.  It soon became apparent that there was so much more to say in order to completely explain my feelings and thoughts. Six sides of A4 later I submitted my piece to the priest who said it was the most moving piece he had ever read. I had always wanted to write a book and so I decided on this book as a way of helping others in a similar situation.  I wanted to change the perception of others who see gay married men as a very straight forward issue.  The book was difficult to write in times – especially reliving certain events but it was also incredibly cathartic and provided a means to begin healing.

Q. This book is based on true life events, did you need to obtain permission from all those involved?

A. In order to protect the identity and feelings of those involved I changed the names of all the characters and sometimes the timelines/circumstances around the events.  This is why it is based on true events and not referred to as a true story.  Some of the characters are aware of the book and have not expressed unhappiness about it but I hope I wrote about the events in a respectful way.

Q. How did you come up with the names of your characters?

A. This is a really difficult thing for me actually that I struggle with especially when you are writing about ‘real’ people. If you are creating fictional characters it is a little easier but I tend to just think of characters from TV programmes or just choose names I like :-0

Q. The title for the book is very distinctive, how did you come up with it.

A. Thank you for that compliment. I am quite proud of the title.  Originally the book was going to be called ‘I love you too..’ but I just didn’t connect with that at all.  I was trying to think of a title that used alliteration for greater effect and I thought of Denial & Deceit.  As I wrote the book I realised that my life really was made up of three ‘periods’ and so I added the Discovery part before going to print.

Q. I love the cover of this book, can you tell us who designed it?

A. I am delighted that the cover has received so much positive feedback.  I would like to be able to take the credit but that deserves to go to a friend of my mine in Thailand – Oishi, who designed it.  We brainstormed about 10 different designs around a concept I had. I asked him to go away and come up with ideas around my concept but to feel free to come up with his own idea.  He then presented the cover that we actually ended up using and immediately I loved it and knew it was perfect.  I did choose the eyes and colour though hahaha.

Q. Who helped or influenced you while you were writing this book?

A. My husband (who was my boyfriend at the time) was a great source of inspiration for me. It was him who helped me to find true happiness and peace and being in this state of mind is what enabled me to write. Before that I was too confused and too emotional to have put anything into words.

I also had a great group of friends and family who were my readers.  At the end of each chapter I would email it out to a group of about 8-10 and ask for feedback.  They kept me going when I thought I should give up on the book.

Q. Did you have to do a lot of research while writing?

A. The great thing about this book was that it required no research and no planning. Because it was about my own life I already had the timeline, plot and characters in my mind.  That was the advantage of having lived a ‘colourful’ life – I was already well researched in the subject matter 🙂

Q.  What were the biggest challenges in getting the story out to readers?

A. Actually that remains the biggest challenge.  Originally I thought that people may not like the book and I was prepared for that and if that meant the book being shelved that was ok.  But the feedback has been tremendous with over 60 five star reviews.  However, the sales have only just reached 1000 copies because I cannot get the word out.  The book market is flooded with thousands and thousands of new books especially now the self-publishing industry is flourishing. It makes it more difficult to get noticed.  The book has featured in many magazines and websites within the LGBT community but it still remains my biggest challenge.

Q. Have you been writing for a long time or is this new to you?

A. This is my first book and the also the first time I have attempted to write a book.  I was previously a teacher and spent a lot of time teaching pupils creative writing skills and it has always been something of interest to me.  It was something I planned on trying when I retired 🙂

Q. What do you do in your spare time, when you are not writing and does this influence the way you write?

A. I actually have very little spare time due to my demanding day job.  If I have spare time I enjoy keeping fit and working out. I am not sure this influences my writing except maybe giving me ideas of future characters from my observations at the gym!  Since writing I have also become a more avid reader and of course this certainly influences my writing. I like seeing the different styles of authors. The only negative though is that I feel a lot more critical when reading books now that I am also a writer compared to when I just read for pleasure.

Q. Do you travel a lot or are you more of a home body?

A. Travelling is my number one passion.  Because I work within education I am blessed with long holidays and I like to take advantage of this.  Since moving to SE Asia I have travelled extensively around this area. Last year I also flew to America for some book readings/signings. In March we plan to travel around Australia.

A. Before becoming a writer I was probably not the strongest reader – this was mainly due to my lack of time. I have always read a book or two when on holiday.  But now I actively search for the time to read.  I really enjoy the Goodreads Reading Challenge  – it pushes me to read more books.  I like a wide range of books actually. My favourite are real life stories such as A Child Called It and Pee Shy. I have also read a large number of autobiographies.  But I do also enjoy reading crime/thrillers by writers such as Lee Childs and John Grisham.  I also like reading books of films I have seen so that I can compare.  I absolutely loved ‘The Fault in our Stars’.

Q. Do you plan on writing a different genre or will you stay with M/M/Gay fiction?

A. I am currently writing a M/M romance fictional book but plan to write an erotic/romance novel for women next.  At the moment I am just exploring different ideas to find things that interest me and see where my skills lie.

Q. What are your plans now; do you have an upcoming release or new project?

A. I have written about 6 chapters of the new book ‘Happy Never After’ which is a M/M Romance novel but I am just so pushed for time.  I think it may be a while before we see this released hahaha. I am still very busy promoting the first book.

I would like to thank J. for the fantastic interview 🙂

After over a decade of teaching, educational management and administration, James needed to find an outlet to share his personal story. As a lifelong lover of literature and writing, James has dedicated his career to educating students, helping them develop the tools they’ll need to share their stories in the future.

His first manuscript was inspired by the response James received from the Catholic priest who officiated his marriage annulment. As part of the process, James was asked to submit a small document outlining his feelings about the events that culminated in the failure of his marriage. The priest commented that the piece was the most moving and impactful account he had ever read. He called it an “inspiration” to other men and women struggling with similar situations. After exploring many options, James realized that his story could help people to understand the complex issues facing gay men in denial – hopefully, helping to spare others from the heartache he and his loved ones experienced.

James currently lives and works in Southeast Asia. He enjoys the tropical climate, and the relaxed pace, which has provided him with the opportunity to continue developing ideas for his second novel. 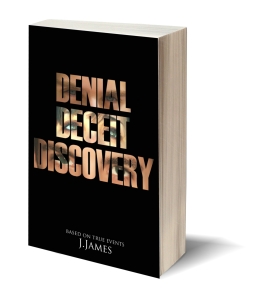 We have 3 Paper Copies of Denial, Deceit, Discovery to give away. Leave a comment below to be entered into the draw. Giveaway Closes 15th February…..