Why I read this book:  I love K-lees books and the blurb had me hooked.

I was offered this ARC in exchange for an honest review. 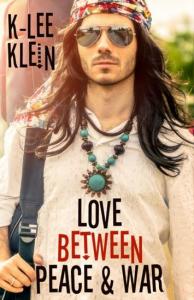 Philip Dunlop grew up in a traditional family with a strict former-military father and a full-time homemaker mother. Now he’s graduated from the Air Force Academy with a promising military career ahead of him.

Dusty Baxter’s upbringing was far more unconventional, with a free-spirited single mother who encouraged Dusty to follow his heart and forge his own path in life. So he does, wearing his hair long, writing songs of peace, and going with the flow in a world at odds with itself.

In spite of their different backgrounds, Phillip and Dusty formed a firm bond of friendship as kids, a friendship that inevitably grew into love as they, and their relationship, matured. Now, Phillip’s family wants him to focus on his military career and settle down with a nice girl. They’ve known Dusty forever, but he’s still the very definition of everything they think is wrong with the turbulent world of 1970. As Phillip’s friend, Dusty’s politely tolerated. But if the truth of Dusty and Phillip’s relationship comes to light, the revelation just might be the wedge that tears apart not only Phillip’s family, but Phillip and Dusty as well.

In a time of war-mongering and peace signs, can best friends find enough common ground to save their love and move forward together into the future?

There is no hiding the fact that I am a fan of K-lee’s books.  I love them, and do you know why?  I know what I am going to get when I pick one up.  Love, happiness, sometime some angst, but I will always get a happily ever after.  Yes sometimes she makes them work for it and I find myself frustrated with them for not realizing it sooner, but they ALWAYS have their happy ending.

I have to tell you this one excited me very much when I saw the premise of the book.  I mean really, a hippy and a military man.  REALLY???  YES, yes and yes some more.  This is one I had to read.  It is the ultimate opposites attract.

Dusty and Phillip have been a couple for quite sometime now, though they have been friends for the majority of their lives.  This gave me the warm and fuzzeis.  When I read the blurb I was somewhat scared of how Phillip would be able to handle their relationship and his career.  This is where I thought the angst would play a role, but nope Phillip makes sure you know his relationship with Dusty is his number one priority.

Dusty, well I connect very much with him as I see myself as a hippy as well.  The fact that he handles what Phillip does for a living just proves how deep his love for Phillip goes.  Yet faced with the possibility of not having Phillip he was willing to give him up so he could pursue his career.  Sweet compassionate man, our Dusty is.

Here is where we get to the bump in the road, and all I can saw is I was in awe of how Phillip handled it.  No I am not going to tell you what happen, I don’t want to spoil it for you.  What I can tell you is this book is wonderful and it is one that I will highly recommend to you.  It is a hug in a book.  But then again K-lee has yet to let me down.

K-lee Klein has lived in one part of Western Canada or another for her entire life. She’s a doting mother of three now-grown kids, and has had characters and plots running around her head for as long as she can remember.

She lives with a patient husband who totally does not get her thing for gay men, two spoiled but wonderful sons (who don’t get it either), and two also spoiled but beautiful cats. Her days are filled with texts and phone calls with her daughter who has already left the nest, and an abundance of fabulous gay men, large and small, bouncing off the walls of her skull, competing for their turns to tell their stories.

Once K-lee finally threw caution to the wind, her first story was accepted and published in December of 2011, and since then she’s been lucky enough to be picked up by several amazing publishers. She’s thrilled to be substituting her previous jobs as a hockey manager/coach, school band volunteer and overall chauffeur with her passion for writing beautiful, emotional men.

Among her favorite sub-genres to read and write are rock stars, cowboys, shifters, and opposites-attract relationships. But to be honest, she’s open to almost anything if it involves messing around in the heads of her characters. She’s also big on series—because she has a hard time letting her characters go—and is usually working on a handful of stories in various stages of completion all at the same time.

You can find all of K-lee’s books and updates on her website: http://www.kleeklein.com.

K-lee is offering a copy of ‘Love Between Peace & War’ to one lucky person who leaves a comment below.  Just let us know your thoughts on opposites attract.  Don’t forget to your email address so we know how to get in contact with you.  Contest ends April 5th, 2015.  Good luck.  Must be 18 to enter.