Marc reviews  ‘Brother With Benefits’ (Visive Encounters 1) by William Cooper. This book was published on April 10th, 2013 by Stiff Rain Press and is a short story with gay brothers in an incestious relationship.

Why I read this book: I had previously read another book about gay twins in love by this author and he offered me a review copy of this book to show me his writing had improved since then. I have read quite a few brothercest books. It seems like the ultimate friends to lovers trope and the taboo usually creates a lot of internal and external conflict that the brothers have to overcome. This topic is not for everyone, but as I can only see a problem with children born of incest and authority figures in a family abusing their power, I don’t have any problem with the subject matter in this case. I was curious to see how the author’s style had developed and to read another book with this content. 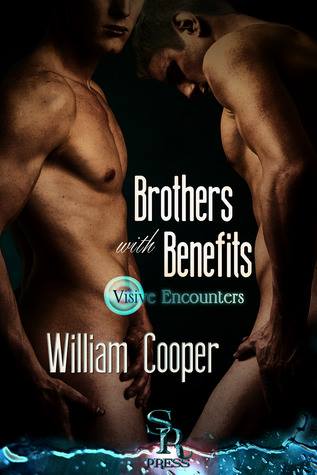 Josh is secretly in love with Erick. How could he not be? Erick is sweet, funny, smart, and as wonderful as he is handsome. He’s simply everything Josh could ever want in a man. Plus, there’s no one in the world that knows or understands him better. After all, Josh and Erick have been friends and companions for as long as either can remember.
But Josh is sure that he’ll never find the right opportunity to share his feelings with Erick.
However, everything changes when Josh creates a profile on the popular online social network, Visive Encounters, a video chat website that randomly arranges face-to-face meetings with strangers via webcam. One night, in a collision of fate and software algorithms, Josh is more than surprised when his monitor reflects a mirror image…his random connection is none other than the object of his desire, his twin brother Erick.
With only a screen of pixels separating them, will Josh finally be able to confess his more-than-brotherly feelings to his twin? Will a lifetime of memories be enough to hold the brothers together?

The title works very well for me. I think it is important to let readers know what they are in for, if there is an incestuous relationship in the story and the title does that very effectively here. It plays with the ‘friends with benefits’ decleration, turning it into brothers with benefits. Implying they are more than just brothers and that there is a sexual component to their relationship. I think being twins, being so close and growing up together, understanding each other like no one else ever will -that is the ultimate friends-to-lovers set-up and the fascination for many readers.

The cover is sexy and uses smart angles and tricks to cover the fact that the naked cover models are not really identical twins (as is often done in this sub genre, like with the cover of ‘The Legend of the Ditto Twins’. It looks hot and works well for this story.

First, I need to say that this book is above average among incestuous M/M romances. If this content interests you, I think you will find this book to be worth reading, despite its shortcomings. I also believe that the author has improved his writing considerably since the last book of his I read (which I rated 6/10).

Josh is the main protagonist in this story. We get to experience everything through his eyes. He has been in love with his brother for years, but knows Erick is straight. There is no outlet for his desires and his pent up sexual frustration. He has to watch his twin walking around the house half-naked every day and hears him have sex with girls again and again.

He decides to try something new and jerk off with other guys in front of his webcam on a site called ‘visive encounters’.

When he realizes that his chat partner is his twin brother, everything he thought he knew changes and al the love and need and desire bursts out of him. His brother turns out to be bisexual and very much interested in turning their relationship sexual.

What follows are hot, well-written brothercest erotica scenes with a little third-party voyeurism thrown in to spice things up more. It’s taboo and thus so much more fun and very hot.

Things move fast from here and I wished the book was longer, so the author could have taken his time to give the characters more depth and not have the story feel as rushed.

The past catches up to one of the brothers and it puts everything they have built, their family and their new-found, intimate connection in danger.

There is a lot of potential there, but it feels like the author doesn’t want to make the main protagonists suffer too much, since their love isn’t easy and will never be easily accepted by others. I can understand that, but their problems still felt too easily resolved.

I’m not a cruel person and I’m happy they found their HEA, but it would have been oh so much sweeter if they had to fight for it against internal and external conflicts and come out victorious in the end.

I still had a lot of fun with this story and enjoyed the forbidden love and the twins’ naughty sexual encounters, but the book would have strongly benefited from more character depth and internal as well as external conflicts that can’t be quickly and easily resolved. As a short story, while I stand by everything I said, it is still among the best the twincest/ brothercest sub genre has to offer.

William Cooper has been writing and reading since he was little. In 2010 he took the first step toward publishing a book and hasn’t looked back since. Whether it’s two men who met in college or brothers who have been in love their entire life, William loves to tell their story for everyone to read. You can find out more about him and is books on his website at www.WilliamACooper.com

One thought on “‘Brothers With Benefits’ by William Cooper #LGBT #Review”