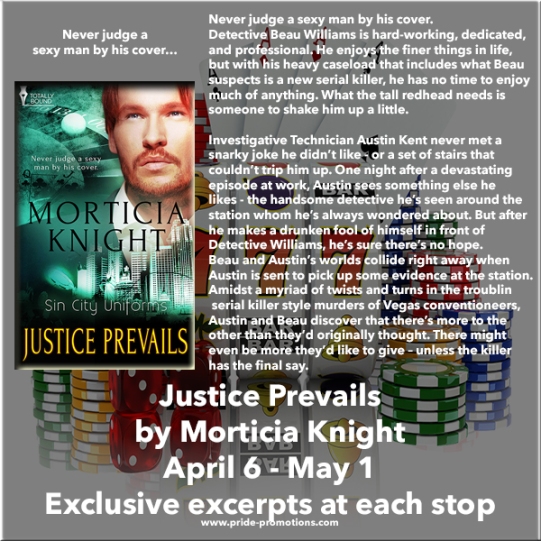 Never judge a sexy man by his cover.

Detective Beau Williams is hard-working, dedicated, and professional. He enjoys the finer things in life, but with his heavy caseload that includes what Beau suspects is a new serial killer, he has no time to enjoy much of anything. What the tall redhead needs is someone to shake him up a little.

Investigative Technician Austin Kent never met a snarky joke he didn’t like – or a set of stairs that couldn’t trip him up. One night after a devastating episode at work, Austin sees something else he likes – the handsome detective he’s seen around the station whom he’s always wondered about. But after he makes a drunken fool of himself in front of Detective Williams, he’s sure there’s no hope.

Beau and Austin’s worlds collide right away when Austin is sent to pick up some evidence at the station. Amidst a myriad of twists and turns in the troubling serial killer style murders of Vegas conventioneers, Austin and Beau discover that there’s more to the other than they’d originally thought. There might even be more they’d like to give – unless the killer has the final say.

Austin stared up at Beau, his only regret being that he hadn’t seen Beau’s face when he came so hard down Austin’s throat. It was clear Beau was still recovering from the intensity of his orgasm. His skin remained flush, eyes closed, his breathing accelerated. He dipped his chin, regarding Austin. Reaching down, he offered his hand. Austin accepted it, not even caring whether he got off anymore. He only wanted Beau to hold him close, to feel the press of his warm skin on his own.

When Beau gathered him in his arms, he sighed, thankful Beau hadn’t become awkward once he’d shot his load. Beau rested his head on Austin’s and idly stroked his back, allowing one hand to travel down to the swell of Austin’s ass, the tip of his finger barely sliding into Austin’s crack. He concluded that getting off wasn’t such a bad plan after all.

Beau lifted his head then descended on his mouth. There was so much emotion in it that Austin wasn’t sure how to react. Each movement of Beau’s tongue was insistent, claiming. It wasn’t heated the way their exchanges had been before, but it left Austin with the sense that what they were doing wasn’t casual or meaningless. He had no expectations beyond the moment they inhabited, but he was reassured by the intent.

“I want you.” Beau gazed down at him, the hint of a smile on his lips.

Austin’s face filled with heat. The way Beau regarded him was raw and open. There was genuine desire there. A wave of unselfishness surged through him.

Beau cupped his chin, angling his head up. “Stop that. Accept that someone really wants you – that I want you.”

Austin nodded jerkily. Beau stole another quick kiss then guided Austin to the bed. He sat first but tugged on him, bringing Austin down beside him. Beau used his hands on his body, his neck, his thighs, exploring him the way Austin had imagined he would. He pushed Austin onto the bed then scooted up next to him. His investigation of Austin’s flesh continued until he had Austin completely stretched out on his back. Beau slid his fingers along the sensitive area where his pelvis joined with his thigh.

He encouraged Austin’s legs open further, reaching behind his sac, rolling his balls with his thumb and fingers then pressing gently on his taint. He continued toward his hole without going so as far as to reach all the way between his cheeks. Beau stilled, locking eyes with Austin.

Austin nodded, transfixed by the magnificent blue of Beau’s eyes. “Put your fingers in my mouth.”

Why I rad this book: When I got the excerpt for our stop, after reading it I knew I HAD to read this book.

We were offered this book in exchange for an honest review.

This is book three in the Sin City Uniforms series and I have not yet read book one or two so I do know that it can be read as a standalone.  There is a couple from a previous book that do make a few appearances in this one but I don’t feel like I was missing anything.  That said my OCD refuses to let me NOT read book 1 & 2, so after this review I will be going back and getting the first two.

Oh man I absolutely adored Austin.  He is that snarky, sarcastic, kinda klutz, adorable guy that you want to be your friend.  The one that you know if you hang out with you will always have a good time.  He does have a tendency to make jokes at his own expense and it makes you wonder why.  You have to ask what he is hiding behind all that snark.

Enter Beau.  Well he is the one person who peels those layers away.  He refuse to let Austin belittle himself.  Oh Beau can you be my boyfriend?  He is calm, confidant, sure of himself and a way hot alpha type.  I loved how different these two were but how they complimented each other so well.  A perfect example of opposites do attract.

When they finally do end up together well all I can say is have a glass of ice water handy, cause your gonna need it.  YUMMY.  But its not just how they heat up between the sheets.  No while that is an added bonus, its about watching them discover that they both are more that their first impressions, that classic line “don’t judge a book by it cover” in never more true.

This book is wonderfully written, with the perfect balance of character development and story line.  I picked it up and couldn’t put it down, I read it in one sitting.  Yea for all three kids being at school.  I highly recommend this book and like I said it can be read as a standalone, but I am betting books 1 & 2 are just as good.

When not indulging in her passion for books, she loves the outdoors, film and music. Once upon a time she was the singer in an indie rock band that toured the West Coast and charted on U.S. college radio. She is currently working on more installments of Sin City Uniforms and The Hampton Road Club, as well as the follow-up to Bryan and Aubrey’s story from Rockin’ the Alternative.

Add book on ‘to read’ shelf at Goodreads 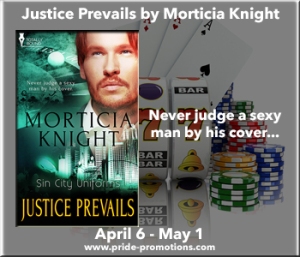 Fangirl Moments and My Two Cents

Elisa – My Reviews and Ramblings

I would like to give a big Thank You to Morticia Knight and Will at Pride Promotions for letting us take place in this Blog Tour.