Ramey’s world is shattered when his brother dies suddenly. He tries to go through the motions, day by agonizing day, doing the best that he can at his job, but it’s not enough. Months of depression escalates into alcohol use and drug abuse to numb the pain. For the past year, he’s been dreading meeting with his lawyer and accepting his brother’s death. The pain becomes too much to bear and Ramey is caught with cocaine at work and fired immediately. When he hits rock bottom, he realizes that he’s disrespecting his brother’s memory and checks himself into rehab with the help of an unlikely friend.

Londyn’s life is perfect living as a wolf Shifter in the Pack Lands. He’s been working in the family business and happy living in his cabin in the woods. Londyn has high expectations for the perfect mate to make his life complete.

Can Ramey accept his destiny as a Shifter’s mate? And is his love for the wolf Shifter worth leaving behind the demons and the only world he’s ever known?

“It pleases me that you want to see my wolf so bad. Have a seat on that fallen log by the fire and watch the master at work.” Ramey took a seat as instructed and watched Londyn prepare for his shift. Londyn removed his clothing piece by maddening piece. It was a slow strip tease set to the music of the forest and Ramey swore all the blood left his body and pooled into his cock. Londyn’s body was absolutely lickable. He had definition in his lean muscles, his chest was smooth and hairless with pale pink nipples that Ramey couldn’t help but drool over. His back and legs had corded muscles and fine blond hair covered his legs and groin. Except for a few old scars, the man didn’t have a mark on him. No blemishes, birthmarks or tattoos and given his age it was odd that he didn’t have at least one. Ramey had never been with a man who didn’t have any ink. And the ass on his boyfriend. He had won the lottery ten times over. He had to sit on his hands to keep from reaching out and when he turned around, he caught Ramey ogling his mate.

“Nah, just messing with you. I like your eyes on me.” Londyn’s own blues were dark with heat proving that Londyn was just as turned on as Ramey was by the show. It wasn’t just Londyn’s eyes giving away his arousal either.

Tina is a retired Air Force brat and has lived in several states as well as a handful of countries. She has always had a soft spot for literature and is a voracious reader. When she isn’t writing, she can be found cuddled up with a good book. Though Tina adores a thrilling novel with sappy lovesick heroes, she is terrified of things that go bump in the night. This makes for quite a complicated relationship with zombies, something that she just can’t get enough of. 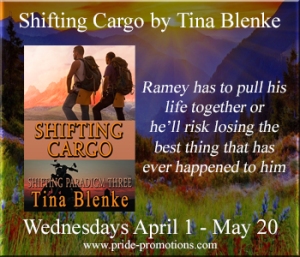 Sinfully Addicted to All Male Romance

Up All Night, Read All Day

Vampires, Werewolves, and Fairies, Oh My

I would like to give a big Thank You to Tina Blenke and Will at Pride Promotions for letting us take place in this Blog Tour.