A copy of this audiobook was provided by the author in exchange for an honest review. 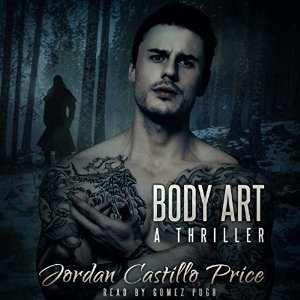 Does everyone have a certain “type” they end up with…whether they want to or not? If Ray Carlucci’s ex is anything to go by, Ray likes his men gorgeous, rebellious, and chock-full of issues. But now that Ray is single again, he has a shot at a fresh start—a very fresh start, since his tattoo shop was gutted by repo men and he can fit all his belongings in the trunk of a taxi.

Ray’s shiny new chauffeur’s license lands him a job as a driver for an elderly couple on Red Wing Island. It’s a cold fall, and since the Michigan island is the summer home to snowbirds who fly south for the winter, it’s practically deserted—save for Ray’s new household and a sculptor named Anton Kopec, who works day and night twisting brambles and twine into the distorted shapes of macabre creatures. Compelling, bizarre, and somewhat disturbing…not just the sculptures, but the artist, too. Ray has a feeling Anton is just his “type.”

Despite their scorching chemistry, when a dead body is unearthed by some workers and a freak ice storm traps them all on the island, Ray can’t say for certain that his new flame isn’t capable of murder.

NOTE: This novella previously appeared in the anthology Partners in Crime 4: The Art of Dying

So. By now I’m starting to feel I’m getting familiar with JCP’s style, and I’m enjoying it VERY much. Her stories are on my re-read and re-listen list already, especially with the pairing of such wonderful narration as Mr. Gomez Pugh brings forth to her characters.

The Narration. Well, at first I was hearing Victor’s voice again, yet this time I was hearing him paired with his lover Jake’s crazy Latino ex, Crash (Psycop reference). It was a little odd at first. Then I was able to hear the visual description and had them drawn quite well in my mind’s eye, and then these two characters gained their own personalities, and voice.

First we have Ray, a hunky, down on his luck tattoo artist, hiding from creditors and betrayed by a live-in ex-boyfriend that ended up costing him everything, including his own business; a Tattoo shop called ‘Body Art Studio’, and you can really tell it’s painful for him to have given up his art. He takes a ‘lowly’ job as a driver for a rich couple on an island. An island where strange things happen. With blood and guts, and feathers, and squishiness. Yuck.

Then we have Anton. For him I was imagining a Keanu Reeves from the Matrix or Brandon Lee from ‘The Crow’, with long hair and a duster. He sounded gorgeous, and an artist also?! Okay. So he’s a bit crazy, and refuses to be ‘pigeon-holed’. And an interesting hobby. And  just so happens to be in some of the wrong places at the wrong time. But, we all have our secrets, right?

Anyway, this short story was done very well. It was short, and I think I was disappointed that it ended so abruptly. But, after going back and re-listening to the last few pages to make sure I hadn’t missed anything (and I actually had) well, the surprise ending wrapped things up rather neatly.

This short mystery/suspense had me pulled in completely, and with all the various events, clues, weather-related issues and supporting characters, this was like a ‘Clue’ meets ‘The Crow’ meets ‘Murder She Wrote’. These two guys just so happened to stumble on some very odd happenings. And right when you think you might know ‘who done it’, then there’s another twist!

And Anton. Man. He’s one kooky, hot mess of a character that you couldn’t tell from one minute to the next what his reaction would be. To be able to just not care what others thought. He was like, in his own world or something. This is one artist I’d like to meet. And watch his creative process. And the sex! It is smoking hawt, and quite, um, unexpected in some rather interesting places.

Anyway, I think if I’d just read it versus listened, it may have been a little lower on the rating scale, but Gomez Pugh’s inflection and timing for all the characters was superb. He added what I think of as subtleties that just filled in for what could’ve felt like gaps for the overall story.

Highly recommended read (I just wish it could’ve been longer!)

Author and artist Jordan Castillo Price is the owner of JCP Books LLC. Her paranormal thrillers are colored by her time in the midwest, from inner city Chicago, to small town Wisconsin, to liberal Madison.

Jordan is best known as the author of the PsyCop series, an unfolding tale of paranormal mystery and suspense starring Victor Bayne, a gay medium who’s plagued by ghostly visitations. Also check out her new series, Mnevermind, where memories are made…one client at a time.

With her education in fine arts and practical experience as a graphic designer, Jordan set out to create high quality ebooks with lavish cover art, quality editing and gripping content. The result is JCP Books, offering stories you’ll want to read again and again.