Sam reviews ‘Yours All Along (A Loving on the Edge Novella)’ by Roni Loren. Published by InterMix on June 16th, 2015 and is 135 pages. 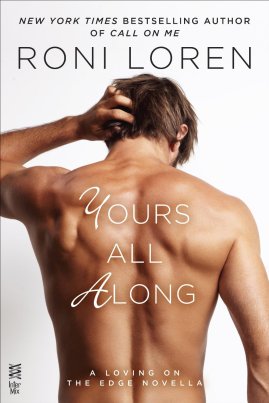 Four years after an accident tore their friendship apart, Hunter and Devon are living separate lives. Hunter is now the all-America hero—a congressman’s son and a pro pitcher in Houston preparing to marry his beauty-queen girlfriend. Devon is in Dallas running a new restaurant.

But when Hunter unexpectedly shows up in Devon’s bar, Devon can’t turn him away. Damn it if the man isn’t still gorgeous. But engaged? Hell no. All he’s doing for Devon is bringing back memories of their college-roommate days, and the night their relationship went too far. Turns out Hunter has never forgotten it either.

Now Devon can’t help but be drawn in all over again by the only guy who’s ever gotten close enough to break his heart. Maybe one more night together would be enough for both of them to finally move on. Or maybe one night will change everything…

Includes a preview of Roni Loren’s Call on Me

Being gay and living in a fraternity house isn’t typically accepted. But when Hunter Riley, the star baseball player and most popular guy in the house, stepped up and offered to be Devon’s roommate everything changed. Devon was accepted for who he is and became part of their group. This is how Devon and Hunter became best friends. Over time it became harder and harder for Devon to keep Hunter in the friend zone and see him as his frat brother and nothing more.

Then one night something changes and lines are crossed. But before Hunter and Devon could figure out what that meant the situation was taken out of their control.

It is now four years later and Devon is running a successful restaurant and Hunter is a pro athlete soon to be married to his beauty queen girlfriend. Neither have seen each other since that horrible day that changed everything so why now after all this time is Hunter sitting at Devon’s restaurant waiting for him?

Seeing the extremely gorgeous man again after so long brings back all the college memories and heartache that Devon has tried so hard to forget about. Turns out that Hunter never forgot about Devon either.

So what does Hunter want now after so long and on the verge of being married?
Does he want one last night with Devon? If so can Devon resist him? Will Devon’s heart break all over again? Or is Hunter finally ready for more?

Roni Loren is one of my favorite authors. I have been hooked on the Loving Edge Series since I read ‘Melt Into You’ where I fell in love with Andre and Jace. When I was asked to read and review Yours All Along for the author I jumped at the chance. This book was a little different from the others in the series, it is strictly a MM relationship where the others are MMF or MF. It is a short story that is brilliantly written. The story flows well. The scenes and characters are realistic and very well-developed. The only negative thing I have to say about this book is that it was way to short. I wanted more of Devon and Hunter but I am hopeful that they will appear in the next book as well.

I highly recommend this entire series but if your strictly a MM reader then it can also be read as a standalone.

Roni wrote her first romance novel at age fifteen when she discovered writing about boys was way easier than actually talking to them. Since then, her flirting skills haven’t improved, but she likes to think her storytelling ability has. Though she’ll forever be a New Orleans girl at heart, she now lives in Dallas with her husband and son.

If she’s not working on her latest sexy story, you can find her reading, watching reality television, or indulging in her unhealthy addiction to rockstars, er, rock concerts. Yeah, that’s it. She is the New York Times and USA Today Bestselling Author of The Loving on the Edge series from Berkley Heat. Website: http://www.roniloren.com