RGR received a free copy of this audiobook in exchange for an honest review.

I met Teodora Kostova at the Euro Pride Con in Munich, just when the audiobook version of ‘Mask’ released and she asked me if I wanted an audible download code for review. Given how much I loved book one (read my audiobook review of ‘Dance’ HERE), I  jumped on the chance. I had a big car trip coming up and this was the perfect ‘reading material’.

Check out Bethany’s Review of ‘Mask’ (West End 2) with an excerpt and the author’s visual inspiration for Adam and Penn.

Check out Bethany’s Review of ‘Dreaming of Snow’ (West End 2.5)

Check out Dana’s Review of ‘Piece by Piece’ (West End 3) with quotes and the author’s visual inspiration for Riley and Sonnie.

Check out ‘People are not dough that can be easily shaped with the cookie cutter’, Teodora Kostova’s post against Homophobia and Transphobia. 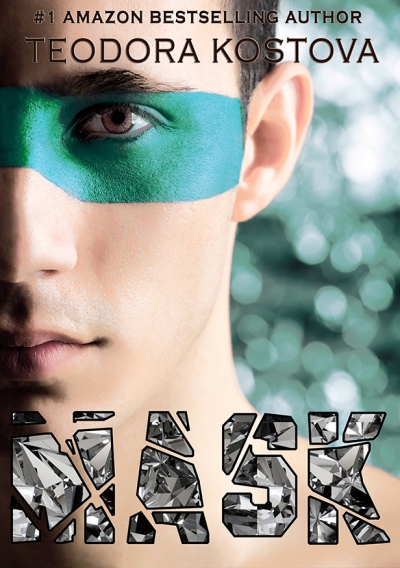 Adam Fischer doesn’t believe in second chances. Heartbroken after his lover Charlie leaves him to chase his music career in L.A., Adam is convinced that meaningless one-night-stands are all life has in store for him.

Until fate drops Penn Shields in his lap.

Penn is a young, talented designer fresh out of college who has just landed his dream job as a wardrobe assistant in Queen Victoria theatre, where Adam is performing in a popular musical.

The last thing Penn wants is to follow in his brother’s footsteps, especially since they haven’t spoken in years. However, the attraction he feels for Adam grows with each day, and soon resisting it proves to be futile.

As Adam and Penn get to know each other intimately, they both realise that first impressions may be deceiving, and that, sometimes, second chances come in the same packaging.

The Cover: I really love that the cover shows a moment from the book and the drawn-on mask looks cool. I must admit, though, that I was very confused for the longest time why the font used for the title was in a camo-look. I just realized that it might be a gemstone-look (which makes more sense), but the title design still doesn’t really work for me.

The Title: Like ‘Dance’ (in Book 1), ‘Mask’ is a very short title, easy to remember and identifies an important theme of the book. We already met Adam in book one with his mask firmly in place and now we can look at the man underneath the mask and see his POV and how he changes through his relationship with Penn.

The Narration: The narrator is still the same as in book one and I still LOVE his narration with the sexy British accent and the melody in his voice when he talks. It makes the words sound musical and fits very well with the story. Again, a wonderful and sexy narration.

I was really curious if I would like Adam as main character. I had mixed feelings about him in book one, because he really acted like a jerk a few times. This book provides his perspective and even though he still does what I hated him for at times in the previous book, Teodora manages to paint him in a very different light. Knowing his thoughts and fears doesn’t undo his mistakes, but it made me understand the way he acted and I actually started to like, then love him very quickly.

Adam is a very different character on the inside than what he lets others see. He wears a mask to protect himself and others. His life is complicated and while he sometimes acts stupidly, it makes him more human in my eyes – especially given that readers know what he is thinking. Still, some of the things he did in book one that seemed inexcusable, look very differently from his point of view. We were seeing the events of ‘Dance’ from different perspectives and knew the guys would end up together, but Adam’s protectiveness of his best friend makes sense. He doesn’t know there will be a HEA for the guys and tries desperately to warn his friend off what seemed to be a mistake, based on the terrible break-up his friend had barely survived in one piece.

So it’s not just understanding Adam’s mistakes and why he made them, but also realizing that from his perspective he did what he thought was necessary and had damn good reasons for.

His romance with Penn was incredibly sweet. I loved how they fit together and brought out the best in each other. It is so much more than being attracted by the twin brother of his ex lover. Penn is a very different person and Adam seems different with him. There is a real trust and love between them and they even play out fantasies like cross-dressing together.

There is not a lot of angst between the MCs, though there are external challenges they have to overcome, some of which bring them closer together and some test their relationship.

I loved everything about this book from the way the characters and their dynamic with each other change over time, the emotional depth of love and fear and their battle for dominance, the beautiful messages nestled in the story and the sub-plots that show the characters on equal footing as they figure out what they want to do and what is important for them in their lives.

This book made me smile, swoon and just left me really happy.

Hi, my name is Teodora and I live in London with my husband and my son. I’ve been writing ever since I can remember, but it became my full time job a few years ago when I decided that everything else I’ve tried bores me to death and I have to do what I’ve always wanted to do, but never had the guts to fully embrace. I’ve been a journalist, an editor, a personal assistant and an interior designer among other things, but as soon as the novelty of the new, exciting job wears off, I always go back to writing. Being twitchy, impatient, loud and hasty are not qualities that help a writer, because I have to sit alone, preferably still, and write for most of the day, but I absolutely love it. It’s the only time that I’m truly at peace and the only thing I can do for more than ten minutes at a time – my son has a bigger attention span than me.
When I’m procrastinating, I like to go to the gym, cook Italian meals (and eat them), read, listen to rock music, watch indie movies and True Blood re-runs. Or, in the worst case scenario, get beaten at every Nintendo Wii game by a kid.

Don’t be shy and get in touch – I love connecting with my readers.