Why I read this book: Mary Calmes is one of my favorite authors with books like the ‘Matter Of Time’ series, ‘Frog’, ‘Mine’, ‘Acrobat’ and the ‘Change of Heart’ series. Still, this short story from 2013 was never really on my radar until the audiobook version was released. I couldn’t resist giving it a try and bought the book once I had discovered it.

CLICK ON THE COVER TO BUY THE EBOOK OR AUDIOBOOK 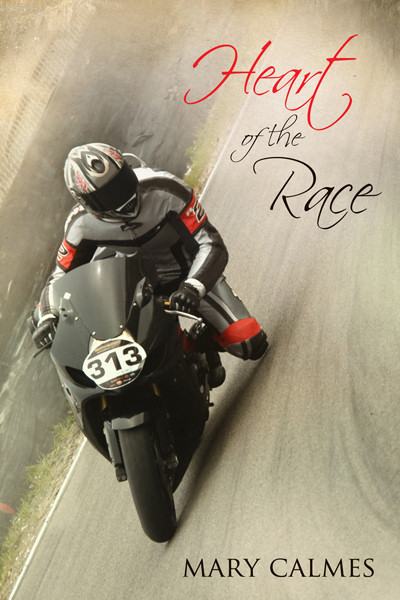 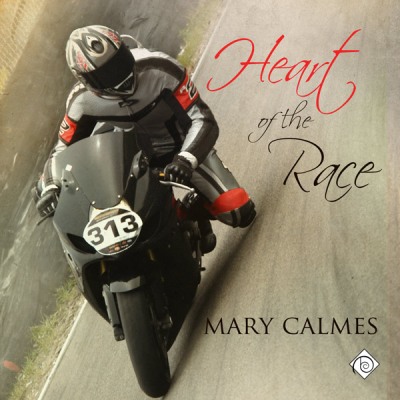 Varro Dacien spends his life riding toward the next adventure. Brian Christie, his best friend and touchstone, the one person who’s always truly seen him, plays sidekick on these madcap adventures and subsequent trips to the hospital until he can’t take it anymore. While Brian can see Varro, Varro has never caught on that he’s breaking his best friend’s heart.

Without Varro, Brian builds himself a life that’s all about just getting by, doing his best to ignore the hole in his heart and his life. Without Brian to balance him, Varro pushes harder and takes more risks to reach that ultimate high. His job racing high-octane bikes on suicide-level courses makes it easy to get that rush… until it’s no longer enough and Varro realizes it’s not the race, but who’s waiting at the finish line that truly matters. Now he just has to convince Brian to be there.

The Title: I really like the title. The ‘Heart’ stands for the romance aspect of the story and the ‘Race’ in combination with the cover image lets readers know what the book is about. These four words communicate a lot and still sound very appealing.

The Cover: The cover is very simple, showing a motorcycle racer on his bike. Readers can’t see how the guy looks and can imagine their own version of Varro, but can appreciate the hot gear the guy is wearing and the excitement and danger of his sport.

The Narration: The narration enabled me to listen to this book, when I didn’t have time to read and the audiobook release brought this book to my attention in the first place. It was well done in a way that I didn’t even much think about the narration and just experienced the story.

The Story: I love Mary Calmes and I think I could have recognized her signature style anywhere. There is smething about it that I immediatelly respond to and I can feel my body relaxing into my comfort zone.

I have never read a book bout motorcycle racers before this one, but I have always found the gear very sexy. I had fun imagining Varro as hot biker, charging over the track. However, the story doesn’t spend a lot of time with the set-up. We are thrown into the middle of the action, important things happen, big decisions are being made. My big problem was that I really didn’t care much about any of it at this point, because the characters still felt like strangers.

Don’t understand me wrong, I know that short stories work differently than novels. With only 90 pages, the author cannot spend too long setting everything up. The main protagonists, though, are supposed to be as close as brothers and I never felt that connection in the beginning and knew almost nothing about the guys. So a lot that happens did not affect me emotionally.

I’m someone who usually really cares about characters and what they have to go through, but it did not reach my heart. I never felt the close bond of brothers and I guess that’s why their romance in the end never feels taboo, either. If you are worried about that – don’t be. Not only are they not related by blood, they feel more like good friends than brothers.

So, when the guys were apart, my heart was not broken. The seperation does not really last long, either, given how short the book is. When Brian and Varro reunite, however, things continue in typical ‘Mary Calmes’ fashion. We finally learn more about the characters, their feelings and connection. It becomes obvious that they do have great chemistry and they are really hot together.

The focus shifts completely on them and it is important and long overdue, but it works. I finally ‘felt’ the characters and started to care about them.

I must admit there was still one thing that annoyed me. Varro finally realized his romantic feeling for his best friend after only being attracted to women before and asks Brian if that makes him gay. Varro seems confused and is trying to find his sexual identity. Brian tells Varro that yeah, being attracted to a single guy, after being attracted only to women his entire life makes him gay. It makes no sense to me. Sure, the point is kind of moot, because he has found his soul-mate and is entering a monogamous gay relationship, but he is bisexual – wherever he might personally fit on the scale between ‘Straight’ and ‘Gay’.

I realize it’s a ‘Gay for You’ story, but I much prefer when the history of attraction to women is not ignored and for me ‘Gay for You’ still works with a bisexual character entering a gay relationship. Characters can identify as whatever they want, of course, but the way this topic is handled here does not quite work for me (even if it is just a tiny moment).

I think I could have loved this book if it had been considerably longer. There is so much story left to tell and so many important relationship moments were skipped over due to the short length that it just feels like less than it could have been. Mary Calmes has several amazing short stories and novellas like ‘Frog’ and ‘Mine’, but this one should have been a novel (or at least a full-length novella).

A solid foundation for the friendship would have been great. The two boys becoming best friends, Brian struggling with his feelings for his foster brother and trying to reject the ‘brother’ aspect, so his feelings didn’t feel as ‘wrong’. Perhaps even Varro’s perspective to see the friendship and trust and his realization that Brian is more than a friend to him and he needs him to be a part of his life.

I firmly believe there is a lot of potential in the story that the author couldn’t explore due to the short length of the book. I really liked ‘Heart of the Race’ and had fun with it, but something was missing. As a fan of Mary Calmes I enjoyed her signature writing style in this book, however, and other fans will likely enjoy it, too, even if I expect it won’t ever be a favorite for me among her many amazing stories.

Mary Calmes lives in Lexington, Kentucky, with her husband and two children and loves all the seasons except summer. She graduated from the University of the Pacific in Stockton, California, with a bachelor’s degree in English literature. Due to the fact that it is English lit and not English grammar, do not ask her to point out a clause for you, as it will so not happen. She loves writing, becoming immersed in the process, and falling into the work. She can even tell you what her characters smell like. She loves buying books and going to conventions to meet her fans..