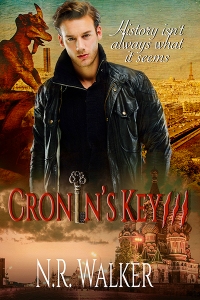 History isn’t always what it seems…

Twelve months after his change, Alec MacAidan is still getting used to his many vampire talents. While most vampires would give anything to have more than one supernatural power, Alec craves nothing more than peace and time alone with Cronin. But when Alec meets entities from outside this realm, he’s left powerless in their presence.

Zoan are half-lycan, half-dragon creatures that have slipped through time and reality, seemingly undetected by man and vampire. Or have they? They bear an uncanny resemblance to gargoyles, leaving Alec’s view on all things weird to get a whole lot weirder.

This new quest leads Alec, Cronin, and their band of friends to Paris, Rome, and Moscow, where they learn that gargoyles aren’t simply statues on walls. In the underground pits beneath churches all over the world, Alec discovers the Key’s true destiny. Facing the Zoan might take every talent he has. And he may need help from the dead to get them all out alive.

Alec sat back in the chair and held in a sigh, feeling every bit the lab rat he’d become. Since he’d become a vampire a year ago, he’d been put through test after test, so each and every one of his

unending list of talents could be explored and documented.

He’d agreed to this, and he knew it was the right thing to do, but in that very moment, he wished to be doing anything else.

And with talents for making errant thoughts an instant reality—like setting fire to sofas and making Xbox controllers explode in Eiji’s hand because he’d somehow won—it wasn’t a good frame of mind to be in.

He loved Jodis. He really did. She had become one of his best friends. But she’d also taken it upon herself to document his talents, and he’d just about had enough for one day. If replicating wasn’t a talent so frowned upon in the vampire world, he’d make a copy of himself to endure Jodis’ tests while he and Cronin hid out in their bedroom. He’d replicated himself a few times, experimentally of course, and found it too taxing on himself anyway.

“Can you do it again?” she asked, notepad and pen in hand.

Alec had found a certain talent he’d dubbed the chameleon, for obvious reasons, because he could make things change color. It was absurd, really, and probably of no better use than a party trick. But he could, if he concentrated, turn a red pen blue or a white shirt black. The talent could only manifest by touch, and it lasted only a few minutes before returning to its original color, but Jodis was rather intrigued.

Alec, on the other hand, had passed bored like it was standing still and was well on his way to irate. “Jodis, I’ve kinda had enough of this today.”

For Alec, it wasn’t so much as reining in a temper anymore, where the most damage done was a cutting remark. Now it was keeping a lid on a few dozen talents that reacted poorly to anger. He only had to get really pissed off and a rage would barrel out of him like nuclear fallout, literally knocking humans and vampires off their feet. Or he could burst eardrums with a furious roar, or maybe he could turn them to stone, or dust. Or maybe, just maybe, he could rip an earthquake through the apartment so he didn’t have to do any more of these stupid fucking tests.

“Alec,” Eleanor cautioned from the next room.

“I wasn’t actually going to do that,” he replied petulantly. He knew Eleanor, with the gift of foresight, saw possible outcomes of decisions made, and that did nothing to quell his frustration. “Jesus, now my thoughts aren’t even my own.” Standing up, he snatched the purple notebook off the desk, holding it for half a second and slamming it back down. It was now black, as was every page inside it, and it was smoldering as though it almost caught fire.

Cronin was suddenly in front of him, a hand cupped to his face. “He’s had enough,” he said to Jodis, and they disappeared.

As soon as Alec’s feet hit the soft earth, he took a deep breath of fresh air and reveled in the silence.

His life hadn’t exactly been quiet in the last twelve months.

He felt the warmth of Cronin’s hand in his, smelled the sweet aromas of heath and moss from both the vampire beside him and the cool air of the long-abandoned battlefield, and Alec exhaled loudly.

Cronin had somehow learned to quiet his mind a little and it gave Alec the silence he so desperately needed. In the last twelve months, Cronin had taken Alec on more time-outs than he could count. Knowing when he’d had enough and was reaching breaking point, Cronin would simply remove Alec from the situation, leaping him somewhere quiet where his mind could have some much needed solitude. But with a gentle squeeze of his hand, Cronin reassured him he was there.

“Jodis is only trying to help. I behaved badly.” He could very well speak words directly into Jodis’ mind and tell her privately that he was sorry. But he’d prefer not invade the thoughts of others, preferring to apologize in person.

“She understands,” Cronin said, trying to pacify him.

Alec sighed loudly and allowed the quiet to envelope him. “I love it here,” he said eventually.

The field at Dunadd, Scotland, had become a sanctuary for Alec. No voices in his head, no city of millions with flurrying thoughts unbidden through his mind, no politics of vampire councils, no meetings, no one hovering.

“It affords you a great privacy,” Cronin said. His Scottish accent and formal tone still made Alec smile. “Your talents as a vampire are a burdensome gift.”

Alec had learned very early on to block out the voices and thoughts of those around him, but living in a city of millions made it a constant effort, and his display of anger at Jodis just minutes ago bothered him. “These talents are a pain in my ass.”

Cronin laughed quietly. “Your control over them still astounds us all.”

“The control you keep talking about is a talent in itself. It’s like casting a net over a thousand different fish.” Alec sighed loudly. “I’ve told you that before.”

“I know. Though it amazes me still.” Cronin squeezed Alec’s hand again and looked out across the

field of long grass to the line of trees that fronted the river. “Lie down with me.”

Cronin simply lay flat on his back in the middle of the field and when Alec lay down next to him, Cronin snatched up Alec’s hand again. And together in the mind-clearing silence, they watched the blanket of stars glide across the sky.

It was a clear autumn night in Scotland, cold and dark. Neither of those things impeded a vampire of course, and Alec would never tire of the simple changes he’d gone through when he became a vampire. It was the complex changes he was beginning to struggle with. The talents he’d been given made him unique: the only vampire ever to have all vampire talents, some he was still discovering a year after his change. It was these talents that made his life hectic, his obligations as the key to the vampire world that gave him a great responsibility, and as Cronin had said, it was becoming a great burden.

Alec loved that Cronin would leap them to the very field where his human life had ended. The old battlefield in Scotland was also where they’d first made love, where they came to talk, to be by themselves. Like now.

“Thank you for bringing me here,” Alec whispered, his anger and frustration from before almost gone. “I feel like I can breathe here.”

“Is that not what husbands do?” Cronin asked with a smile. “Save the other from the myriad of madness?”

“Husbands,” Alec said, bringing Cronin’s knuckles up to his lips and kissing them softly. “Now that is something I’ll never tire of.”

N.R. Walker is an Australian author, who loves her genre of gay romance.

She loves writing and spends far too much time doing it, but wouldn’t have it any other way.

She is many things; a mother, a wife, a sister, a writer. She has pretty, pretty boys who live in her head, who don’t let her sleep at night unless she gives them life with words.

She likes it when they do dirty, dirty things…but likes it even more when they fall in love.

She used to think having people in her head talking to her was weird, until one day she happened across other writers who told her it was normal.

One copy from backlist, including Cronin’s Key III 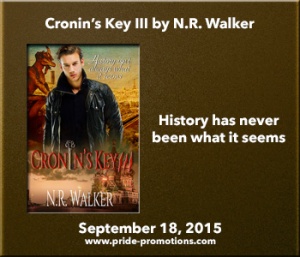 I would like to give a big Thank You to N.R. Walker and Will at Pride Promotions for letting us take place in this Book Blast.