Why MtSnow read this story: When I saw the newest Josh Lanyon book in NetGalley, I could not pass it up! And I’m so glad I didn’t. Fantastic story. And interesting tidbit.. I didn’t realize Bill Clinton was born ‘ William Jefferson Blythe, III’.  Probably not anything to do with the story, but somewhere else I saw this somewhat old-fashioned, yet interesting name 🙂 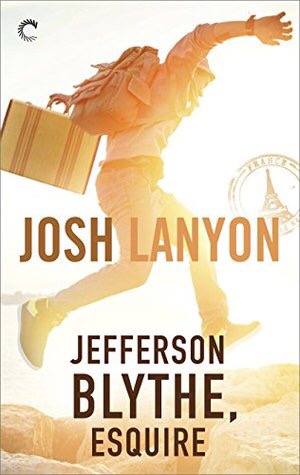 In this fast, fun and dead-sexy male/male new-adult caper from multi-award-winning author Josh Lanyon, twentysomething Jefferson Blythe gets lost, gets found, falls in love and comes out…all in the span of one wild summer

After his first relationship goes disastrously awry, Jeff Blythe uses his savings to tour Europe—the old-fashioned way. Armed with his grandfather’s1960 copy of Esquire’s Europe in Style, Jeff sets off looking for adventure but finds much, much more than he bargained for…

In London, dodging questions from shady criminals about a mysterious package he most certainly does not have is simple. Losing the gunmen who are convinced he’s someone else is not. And when George, an old friend, offers him help—and a place to stay, and perhaps something more—things become complicated.

Is George really who he seems? And is Jeff finally ready to act on his attraction?

From Paris to Rome and back again, Jeff and George fall for each other, hard, while quite literally running for their lives. But trusting George at his word may leave Jeff vulnerable—in more ways than one.

Okay. So. Just a heads up. This was a book I had to read ALL in one sitting. I was up til 3 a.m. Thank you very much dear author!! This story had me by the seat of my pants from the get-go. It was a typical Lanyon mystery, in that it was  light on the romance, but with a history and melancholy feeling as well as a sense of ‘place’ to it that just pulled me into the story from the first chapter. Honestly, I could not tell from one chapter to the next whether George was sincere, trustworthy, or even who and what he proclaimed to be!

We, the reader, despite what seems a fast pace, are slowly given layers to peel back as pieces are revealed of our MCs past history, which, to be honest, is very much downplayed in the beginning half of the book. But we are teased, given glimpses, and well, for me, much of an emotional roller coaster that went very well with the galavanting around from Paris to London as Jefferson tries to follow his grandfather’s lovely old journal, giving us a glance at bygone days. I’m thinking his grandfather was quite a rascal, and I do wonder if he had ulterior motives *wink

I also enjoyed the descriptions of the locale in each country that was visited and could almost feel, smell and breathe in the atmosphere of where Jefferson was in his travels. This book had a fresher feel and was a refreshing change in the standard mysteries we are used to from Lanyon. In my opinion it does very well as a standalone, as a light little adventure and mystery, giving us an HFN. It shows there is still hope in misunderstandings.

Jefferson is a slightly younger character, fresh out of college, taking ‘the tour’ so to speak. This one has a ‘new adult’ feeling, and I could see a younger audience enjoying this as much as Josh’s loyal readers. And, honestly?  I wouldn’t mind revisiting these guys again, myself, if more adventures just so happened to be written. Honestly. 😀

A distinct voice in gay fiction, multi-award-winning author JOSH LANYON has been writing gay mystery, adventure and romance for over a decade. In addition to numerous short stories, novellas, and novels, Josh is the author of the critically acclaimed Adrien English series, including The Hell You Say, winner of the 2006 USABookNews awards for GLBT Fiction. Josh is an Eppie Award winner and a three-time Lambda Literary Award finalist.