Book Name: Along Comes a Man 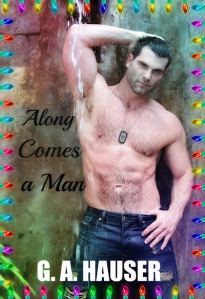 Forty year old Freddie Oli and his longtime buddy, thirty-five year old, Barron Isaac, worked in the IT business together for years. When their company was bought out, Freddie and Barron decided to alter their career direction, and open their own landscaping business.

The two older men hire an ex-marine, Dirk Jameson, to help out. At twenty-eight, Dirk was eager to work, strong, and not to mention, gorgeous.

Although Freddie and Barron were gay, they never felt any chemistry between them, but their bond of friendship was powerful.

As Dirk begins to flirt with both men, Freddie worries that Dirk will be the demise of a good friendship and a budding business.

A strong partnership is tested as the men are faced with a handsome stud who seems to want it all.

Will this trio have a happy ending? Or will jealousy and doubt creep into their lives?

For Barron and Freddie, things were smooth sailing, until, along comes a man…

Dirk drank his hot coffee, resting a leg on each man, since it was tight for the three of them on the bench seat. He liked the idea of working outdoors, and even though he had a degree in engineering, the thought of being cooped up in an office didn’t appeal.

The two men who interviewed him, however, did appeal to him.

Barron Isaac, a fit, handsome man, who Dirk figured was in his early thirties, had incredible blue eyes. He wasn’t very tall, but his arms were sculpted and he had designer stubble and conservatively cut brown hair. On his initial interview, Dirk had met both men. They’d told him they had been cut loose from an IT company that had been bought out, so immediately Dirk knew they were bright and eager to start their own business.

Since the IT world had become a clutter of winners and losers, landscaping in southern California was a good alternative. And in December, the rains had come, and plants needed tending, and lawns mowing. And in the summer drought, many residents were opting for drought-resistant plants or removing sod for rocks.

Sipping his coffee, Dirk glanced at Freddie Oli as he drove. Dirk imagined Freddie was slightly older than Barron, but was, in Dirk’s opinion, the perfect older man fantasy. He had slightly graying temples, some laugh lines near his eyes when he smiled, and was also fit, and well built. Dirk couldn’t help but see the friendship these two men shared, and even when they teased each other, it was good-natured and fun.

Dirk liked them on sight.

And would love to fuck them. Both.

Neither man wore a wedding ring, no one spoke of wives or children, and up until this morning, Dirk assumed the men lived together. He wasn’t so sure about it now, now that Freddie had told Barron to let Dirk park his motorcycle in the garage. If Barron lived there, wouldn’t he have just done it?

Dirk had thought he had a read on these men when he first met them. Now he wasn’t so sure. It didn’t matter.

He could certainly work for two straight buddies.

Dirk took a look at each man’s crotch, seeing the bulge in their pants.

But it sure would be fun if they were gay.

Dirk relaxed in the bench seat, letting his knees touch each man’s leg, and smiled.

Barron felt the heat of Dirk’s leg on his and didn’t move away. He sipped his coffee, thinking about having a hot hunk like Dirk working with them. Maybe it was silly but the minute Dirk Jameson showed up for an interview, Barron and Freddie exchanged looks as if already hiring the handsome man on sight. Sure, they asked him the standard questions, had him fill out forms, did a quick background and credit check, but the man wasn’t a liar. Everything he had told them was true.

Fresh out of the military, marine-tough, and fucking damn handsome. Sure, it was immature for him and Freddie to hire Dirk for his appearance and power, but hell, why shouldn’t they hire him? Barron was proud to have hired a vet. He just hoped Dirk wouldn’t grow bored. This was mostly grunt work. And just as he and Freddie made the change from office and computers to outdoor and physical labor, Barron hoped doing this kind of work was something Dirk would enjoy.

Freddie parked in front of their first home. At the moment, they had a client list of only residential property. But Barron would love to build their way up to condo complexes, or better yet, hospitals and office buildings.

As he did, Barron could see Freddie grab Dirk’s thigh playfully, giving it a squeeze.

Dirk tossed his empty coffee cup on the floor with the other trash and said, “Let’s go.”

Barron opened his door and wondered if Dirk thought it was uncomfortable to have Freddie do that. He tried not to over think it and opened the tailgate of the truck. He hopped on and began lifting up the mower and blower, handing them to the two men standing at the tailgate.

Freddie asked Dirk, “Do you want to mow or blow?”

Barron paused to see Dirk’s reaction to that question, which obviously had a sexual innuendo.

Amazon bestselling, award-winning author G.A. Hauser is from Fair Lawn, New Jersey, USA. She attended university at The Fashion Institute of Technology in NYC, and has a BA in Fine Art from William Paterson College in Wayne NJ. As well as degrees in art, G.A. is a Graduate Gemologist from the Gemological Institute of America (GIA). In 1994 G.A. graduated from the Washington State Police academy as a Peace Officer for the Seattle Police Department in Washington where she worked on the patrol division. She was awarded Officer of the Month in February 2000 for her work with recovering stolen vehicles and fingerprint matches to auto-theft and bank robbery suspects. After working for the Seattle Police, G.A. moved to Hertfordshire, England where she began to write full length gay romance novels. Now a full-time writer, G.A. has penned over 120 novels and short stories. Breaking into independent film, G. A. was the executive producer for her first feature film, CAPITAL GAMES which had its Film Festival Premiere at Philly’s Qfest, and its television premiere on OutTV. G.A. is the director and executive producer for her second film NAKED DRAGON, which is an interracial gay police/FBI drama filmed in Los Angeles with the outstanding cinematographer, Pete Borosh. (also the Cinematographer for Capital Games)

The cover photographs of G.A.’s novels have been selected from talented and prolific photographers such as Dennis Dean, Dan Skinner, Michael Stokes, Tuta Veloso, Hans Withoos, and CJC Photography, as well as graphic comic artist, Arlen Schumer. Her cover designs have featured actors Chris Salvatore, Jeffery Patrick Olson, and model Brian James Bradley, among many others.

One thought on “‘Along Comes a Man’ by G. A. Hauser #LGBT #BookBlast #Giveaway”