Sam reviews  The Lightning-Struck Heart by TJ Klune. This audiobook was published by Dreamspinner Press on December 10, 2015 and is 19 hours and 48 minutes long.  Ebook was released on July 20th 2015 and is 400 pages long. Narrated by Michael Lesley.

This audiobook was provided free of charge by the author in exchange for an honest review. 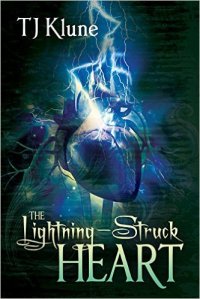 Once upon a time, in an alleyway in the slums of the City Of Lockes, a young and somewhat lonely boy named Sam Haversford turns a group of teenage douchebags into stone completely by accident.

Of course, this catches the attention of a higher power, and Sam’s pulled from the only world he knows to become an apprentice to the King’s Wizard, Morgan of Shadows.

When Sam’s fourteen, he enters the Dark Woods and returns with Gary, the hornless gay unicorn, and a half-giant named Tiggy, earning the moniker Sam of Wilds.

At fifteen, Sam learns what love truly is when a new knight arrives at the castle—Knight Ryan Foxheart, the dreamiest dream to have ever been dreamed.

Naturally, it all goes to hell when Ryan dates the reprehensible Prince Justin, Sam can’t control his magic, a sexually aggressive dragon kidnaps the prince, and the King sends them on an epic quest to save Ryan’s boyfriend, all while Sam falls more in love with someone he can never have.

Or so he thinks.

Sam is a young boy who lives in the slums. He accidentally turns a group of boys to stone. Sam has no clue how he did it, but this event ends up changing his life. Sam and his parents to move to the castle, where he becomes the apprentice to Morgan of Shadows, the King’s Wizard.

At the age of 14,  Sam is sent out on a test to find the unexpected. He returns with Gary, the funniest gay unicorn that has lost his horn and Tiggy, a lovable half giant. The three of them become the best of friends with a fierce need to protect one another.

As Sam gets older, he goes through many tests and trials. His magic gains more strength. But it also become more uncontrollable. This isn’t the only problem Sam has. Since he was 15 years old he has had an undeniable pull to Ryan. Ryan Foxheart is one of the highest ranking Knights of the castle. He is also dating the prince. Sam knows that nothing will ever come out of his attraction to Ryan but he can’t help how he feels when Ryan is around.

Sam is now 20 years old. He isn’t any closer to being able to control the magical powers he has. It is actually becoming worse. There are factors that come to light that could help Sam. Unfortunately, they are not something he can hold on to. Knowing what he needs and not being able to have it is frustrating and saddening.  Sam has strength and pride, he refuses to let the disappointment show. That is until the Prince gets kidnapped by a dragon that wants to hoard him.

When the King sends Sam and Ryan off to find his son, many things are revealed. But knowing something doesn’t always mean you can change the end results no matter how much you want to.

This is only the second audiobook I have listened to. I have to say I am becoming a big fan of them. The author did a spectacular job writing The Lighting Struck Heart. I loved it from beginning to end. The story line was great. I laughed so much throughout the entire book. There were also times when my heart ached for the characters. There is so much going on I couldn’t wait to see what would happen next. The secondary characters I absolutely loved. The narrator was fantastic. The way he was able to distinguish each character with their own unique voice was a great surprise. Gary’s voice and they way he expresses himself is what got me hooked from the get go. The length of The Lightning Struck Heart is almost 20 hours long, but it feels like only a few.  I was are enjoying it so much I didn’t want to stop listening. I can’t wait to experience other books written by this author. I will also be looking for more stories recited by the narrator as well.

I highly recommend listening to Lightning Struck Heart by TJ Klutz and narrated by Michael Lesley.

When TJ Klune was eight, he picked up a pen and paper and began to write his first story (which turned out to be his own sweeping epic version of the video game Super Metroid–he didn’t think the game ended very well and wanted to offer his own take on it. He never heard back from the video game company, much to his chagrin). Now, two decades later, the cast of characters in his head have only gotten louder, wondering why he has to go to work as a claims examiner for an insurance company during the day when he could just stay home and write.

He dreams about one day standing at Stonehenge, just so he can say he did.