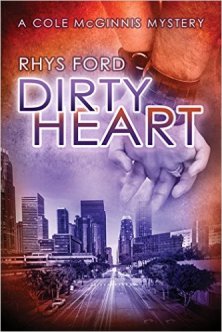 Former LAPD detective Cole McGinnis’s life nearly ended the day his police partner and best friend Ben Pirelli emptied his service weapon into Cole and his then-lover, Rick. Since Ben turned his gun on himself, Cole thought he’d never find out why Ben tried to destroy him.

Years later, Cole has stitched himself back together. Now a private investigator and in love with Jae-Min Kim, a Korean-American photographer he met on a previous case, Cole’s life is back on track—until he discovers Jeff Rollins, a disgraced cop and his first partner, has resurfaced and appears to be working on the wrong side of the law.

As much as Cole’s fought to put the past behind him, he’s soon tangled up in a web of lies, violence, and death. Jeff Rollins is not only trying to kill Cole’s loved ones, he is also scraping open old wounds and long-forgotten memories of the two men Cole loved and lost. Cole is sure Rollins knows why Ben ruined all their lives, but he isn’t looking for answers. Now Cole is caught in a cat-and-mouse game with a cold-blooded killer with the key to not only his past but his future.

I haven’t reviewed this series before on this blog, but I became a big fan of the Cole McGinnis books listening to the audios. I was beyond excited to have the chance to read and review Dirty Heart, though melancholy at the thought of the series ending. Because I listened to all the previous books, I have to admit that I heard Greg Tremblay’s voice in my head as I read. I know that many people have loved his narrations, including the author, because there is a sweet shout out to the narrator in the story.

Cole and Jae-Min have gone through a lot to get to where they are in the story. When they started Jae was closeted and wary of being in a relationship with a man. He knew it was not acceptable in his family and the Korean culture, but their strong feelings for each other prevailed. Through Cole’s many cases, characters being shot, and Cole’s past coming back to haunt him and Jae, they have truly stood the test of time.

I wasn’t sure how this book would play out. Part of me thought the series would go out in some blaze of glory because of the frequent and very detailed violent occurrences in past books. What happened was that Rhys Ford brought a happy ending to Cole and Jae. To the very loved supporting characters as well; Bobby and Ichi, Mike and Maddie, Scarlett, and Claudia. I couldn’t have thought up a more perfect ending. Though that might be oversimplifying the amazing story the author created.

Cole has come full circle and is hired by Jae’s aunt and uncle, the same people who hired him at the beginning of the series. In investigating the attempts on Jae’s uncle’s life, Cole is revisited by skeletons of his past once again. Another loved one is shot and there is a question of who’s life is really in danger from the antagonist of the story. If you’re a fan of this series and know Cole’s history, you, like me, will have concluded that as happy of an ending that Cole and Jae have, there will be questions from Cole’s past that can never be answered. Even Cole had accepted that. However, Rhys has granted us all mercy with this story, wrapping up every loose end.

It was the perfect ending to an amazing series. I can’t recommend the books enough, and I doubly recommend the audios. Cole, Jae, and the rest of them will stay in my heart forever.

Rhys Ford was born and raised in Hawai’i then wandered off to see the world. After chewing through a pile of books, a lot of odd food, and a stray boyfriend or two, Rhys eventually landed in San Diego, which is a very nice place but seriously needs more rain.

Rhys admits to sharing the house with cats of varying degrees of black fur and a ginger cairn terrorist. Rhys is also enslaved to the upkeep a 1979 Pontiac Firebird, a Toshiba laptop, and an overworked red coffee maker.