Chatting with LE Franks for our Rainbow Gold Review’s anniversary event left me laughing myself silly. When I found out we were doing 2-4-1 week, reviewing two shorter stories and novellas that might make up the same page count as a full-length novel, I knew I wanted to choose her book ‘6 Days to Valentine’ for review. At 72 pages it fit the criteria and I wanted to see how her humor and charm translated into a story.

Share your favorite city in the world with us in the comments section of this post for the chance to win an e-copy of both ‘6 Days to Valentine’ and the sequel ‘6 Days to Get Lucky’. 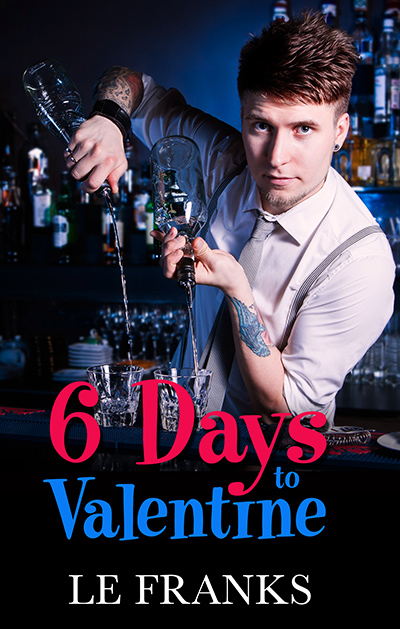 In Nick’s perfect world, Valentine’s Day would be struck from the calendar.

Nick’s dreams of a Happily Ever After were shredded long ago and the last thing he and his customers need is a bunch of happy loving couples rubbing it in their faces.

Bouncer Fat Boy Newman is willing to bet he knows Nick’s heart better than he does. He has just six days to change Nick’s mind about romance and the holiday and the perfect man to do it.

Too bad it’s not him.

Too bad Nick’s not going down without a fight.

Too bad he cheats.

“Within minutes, FatBoy and I were alone. Marco went out the back after handing me a cold, damp bar towel and securing the kitchen for the night. Every busboy, line cook, server, and manager had scattered like roaches after someone flicked on a light in the dead of night. It was now just the two of us. I looked over at where FatBoy sat on the floor slumped against the bar, and my stomach clenched. He wasn’t going anywhere soon.

Kneeling next to him, I wiped his face with the damp towel, cradling his head in my hand. I’d never been this close to him before so I took advantage of the moment, cataloging his features. His hair was the color of straw, gold and brown strands highlighted by the occasional silky white streak. You could still see the influence of a high-and-tight military cut he’d let grow out some. The longer strands around his face were darkened with sweat. I didn’t like his color, his eyes shadowed more gray than blue.

“I know.” His jaw flexed, then relaxed.

“I know.”  FatBoy turned away from me, closing his eyes and resting his head against the bar’s oak footboard. I felt like crap. He’d always been so big and smirky, pestering me whenever we worked together. I always thought of him as a giant pain in the ass.

Damn. Now I was the giant ass.

I left him alone after handing him a bottle of water. Sipping carefully, he watched as I cleaned up the floor and bar, leaving a note for the cleaning crew at six a.m. It took me an hour, and by the time I was done, FatBoy was standing, waiting to lock up.

He didn’t say another word to me, just set the alarm, turned the key, and walked out into the night.”

Nicholas Valentine hates his name and the teasing he got for it when he was younger. He hates the holiday that shares his last name even more. Even though all he really wants is true love and a happily ever after, he seems to resign himself to casual hookups and putting up blockades that allow anyone to get close to him. Probably not the best way for him to find his ideal partner. FatBoy is the only one who ignores his warning signals and moves in to find out more about him.

FatBoy whose real name is Davis is a bouncer at the bar/restaurant where Nick bar tends. Even when all the other employees know to stay away from Nick, he comes in playing 20 questions and trying to set up Nick with his cousin. I’m not sure why Nick was so dismissive of Davis. Perhaps it was the unflattering clothing he wore when they first met that caused Nick to give him the name FatBoy or because Davis seemed straight. In spite of Davis’s attempts to find Nick his happy ever after, Then Nick plays a dirty trick that leads them to seeing each other in a whole new light.

Events transpire and Davis’s cousin shows up causing all sorts of trouble. Poor communication and mixed messages leave Nick hating Valentine’s day and the idea of love more than ever, but in the last moments of the horrible day, he finds out things weren’t ever as they seemed. A first kiss becomes a promising HFN but the story is not over. I’m really looking forward to reading 6 Days to Get Lucky after this, and any continuing books in the series. I thought it was a well-written novella though I wish it could have been longer. I am glad the author expanded the story into a series.

LE Franks is offering an ebook copy of both 6 Days to Valentine and 6 Days to Get Lucky to one winner.

Restrictions apply. Must be 18 to enter. Void, where prohibited. Etc.

At seventeen, LE Franks walked away from writing for love. Jumping head first into real life and travelling the world seemed to be fair compensation until the characters in her head demanded their turn. Now, living in the San Francisco Bay Area, surrounded by inspiration everywhere, LE is finally taking off the filters and giving the stories free rein. These days, LE can be found frequently writing about sexy men who desperately need a happily ever.

LE writes M/M Romance in a unique mix of humor and drama with enough suspense to produce fast-paced stories filled with emotion and passion and featuring characters that are quirky and complicated. Don’t expect the typical, rugged hero or sophisticated businessman with the world at their feet; LE’s men are living in the margins— they’re in the middle of their journey, doing the best they can while searching for a connection to something bigger than themselves. With a little effort, and a lot of luck, they may actually find their happily-ever-afters.

When not writing, LE wrangles an odd assortment of jobs (six— both paid and volunteer), houseguests (including pro baseball players), family, and friends. Manifesting an odd combination of contradictory talents and traits, LE is tragically honest and personally deceptive and makes the best piecrust— ever.