Why I read: 1. I love how Sara York writes. 2. Sara York is an author that I highly respect. The lady has class. 3. I actually won these two books and read them in one sitting.

Every year the MM group on Goodreads does a free read event, Bonded is my submission for 2014 Love’s Landscape Event. At the beginning of the event, a story letter is submitted from a reader, asking for a very specific story. This is the letter from Tonnya.

My soul ached for command and love, and I was lost. Until I met them. We’d seen each other at different times but it wasn’t until the night I almost killed myself trying to lift more weight than I should that our worlds finally collided. What started out as lifting partners and movie marathons turned into weekend jaunts across the city and every free moment spent together, a tension building up between us that left me holding my breathe. I’ll never forget the night He took control and shattered our worlds, morphing our growing friendship into something more. I used to tell myself I would walk this earth lost and broken forever, but I know now my soul was waiting for Sir and Pup to save me. 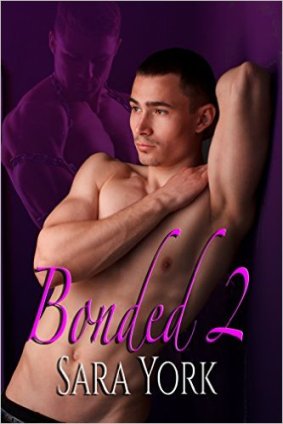 Liam Muller’s passion for life, mixed with his abusive past created more problems than Greg Peterson could handle on his own. When the pair meet Chris Edwards, everything changes. Both Greg and Chris keep Liam even, but when Liam’s parents plot his kidnapping, Chris and Greg can do nothing to keep him safe without the help of Chris’s new friend, Agent Samuel Graves.

Samuel is all about the job, but he craves a connection like Liam, Chris, and Greg have. When Sam meets Hudson Radcliff, he’s thrown off balance with attraction. His normally cool demeanor is set aflame with lust and need. Hudson and Sam burn for each other, but their passion is tested when everyone is put in danger.

Chris, and Greg fight Liam’s demons after they are reunited, but Liam’s parents won’t give up without a fight. Three men together may challenge people, but Liam, Chris, and Greg will fight to the end for their love.

The story starts with Chris coming home from a business trip to find that his boyfriend has just up and left him. No explanation, no note, nothing. Just gone and Chris finds himself struggling with not knowing why. He uses the gym and strenuous workouts as his way of dealing with the pain he finds he has over his breakup. He does this excessively and to the extent that he isn’t taking care of himself and it starts to show. During a workout, he meets Greg.

Greg has a domineering manner and Chris finds that surprisingly attractive. He is attracted to the sexy man, but then during one of his workouts he is noticed by another man, Liam. He is also attracted to Liam, who is sweet and charming. He finds out that the two men are partners and they develop a friendship that soon becomes much more.

As Chris realizes that he needs Greg to control his life, he also discovers that Liam needs him in order to maintain his. They embark on a three-way relationship that has some of the hottest sex I’ve ever read. I love watching how the three men make this unusual relationship work. They all go from attraction to love surprisingly smoothly. All these men have their own special something to contribute and it just works for them.
They don’t exactly say in this book that they get their HEA, but it’s implied and I know that they expand on their story in the next book of this series.

This isn’t a dark story although you can tell that the characters have hidden depths and I can’t wait to learn more about them. I give this book a 9/10 rating

Why I read this book: It is reviewers choice this week and since I am already reviewing the first book in this series I thought I would include this one as well since together you get the whole story.

Bonded 2 picks up a few months after Bonded left off. The three men are living together and thriving in their three-way relationship.   Liam has received news though that his Grandmother has passed away and he flies alone to attend the funeral. His parents have deceived him once again and force him by means of threat into a conversion camp.

It doesn’t take long before his two lovers are searching for him. Chris and Greg employ every means to find their missing man. This brings them to Sam, an FBI agent that Chris had met at the gym. With Sam’s help they launch a rescue and shut down the camp.

Liam’s parents are determined to get him back and aren’t above lying to do it. The men have to protect Liam from falling back into his parent’s clutches, so they decide that Chris will marry Liam.

There is a great deal of inner monologue amongst the three men about this wedding.

Greg knows that Chris is the only choice to marry Liam as he had some things in his past that Liam’s parents could use against him, but he has his own struggles about feeling he might be abandoned by the two men he loves more than life.

Chris adores both his men and doesn’t want to be the cause of any conflict between them.

They do finally work all these issues out and have the wedding followed by a commitment ceremony. This was a lovely part of the story and I admit to tearing up a bit (because that’s what I do at weddings).

Meanwhile Sam, who has been lonely and somewhat jealous of the love he sees that the three men have finds his own love interest.

The characters are deep thinkers and pulled me right into their world.

That this second story is longer and more in depth was icing on the cake for me. I give this book a 9 1/2 /10 rating

Writing is Sara York’s life. The stories fight to get out, often leaving her working on four or five books at once. She can’t help but write. Along with her writing addiction she has a coffee addiction. Some nights, the only reason she stops writing and goes to sleep is for the fresh brewed coffee in the morning. Sara enjoys writing twisted tales of passion, anger, and love with a good healthy dose of lust thrown in for fun.