Dana reviews You Are Here by Chris Delyani (Published by iUniverse, August 14, 2012, 334 pages) A paperback was generously provided in exchange for an honest review.

This week is Different Publishers week at Rainbow Gold Reviews. I had the paperback of You Are Here, and luckily for me, the publisher was not being chosen by anyone else. The book blurb sounded very interesting and it was the perfect time to review it. 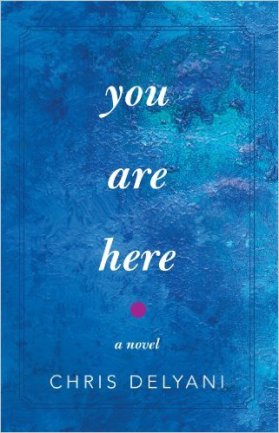 All Peter Bankston ever wanted to do was paint.

An aspiring painter, Peter scratches out a pauper’s living in San Francisco, wanting nothing more than to be left alone. Instead, he finds himself getting involved with not one but two very different men.

Like Peter, getting involved with another man is the last thing on Nick Katsaris’s mind. Smart, handsome, and good-humored, Nick’s done more than just survive—he’s positively thriving in San Francisco. But when he meets Peter, what begins as fun and games quickly turns into a game he can’t control.

Miles Bettencourt’s days are filled with longing. For him, San Francisco is haunted by Stuart, his missing ex-lover. Desperate to win him back, Miles wanders the streets in the hope of running into Stuart again. Instead, he runs into Peter—the one man who might hold the key to what Miles is looking for.

These three gay men soon form one very unlikely love triangle. Sometimes, when people break apart and then come together, they learn that discovering that where you are is the key to knowing who you are.

The cover:  I can appreciate a cover with a simple background color and title, and sometimes it’s nicer to imagine the places and characters in the books without the image already provided. I though this was a simple blue background, but after reading the book, I can see that it might be a rendering or a small minute of a painting created by one of the characters in the book. It gave me a new appreciation for the cover.

The story: I previously started reading the paperback, and somehow was distracted from it. Shamefully, it took me a little while to pick it back up, but when I finally did, I had to wonder why I didn’t read it sooner. From reading the blurb, I had hoped it would be a menage, but thought it would have a love triangle. It’s definitely not the first, but I can’t call it a triangle either, because there was no big moment of decision where Peter was made to choose between Miles or Nick to be his one and only.

This story takes place in San Francisco and has a very realistic feel to it. The places they see and the six degrees of separation between the characters prior to meeting created a vision of the small town feeling of the gay community in San Francisco, where everyone one knows everyone else or knows someone who knows that person. It felt like a small community but with thousands of different personalities.

Peter is creative, but tends to go wherever the flow takes him. He’s not a take charge person when it comes to relationships but he knows enough to stand up to anyone doing him wrong, though sometimes it takes him a little while to get there. Miles and Nick float in and out of his life at different times, but he meets Miles first when Peter tries to escape Miles’s roommate’s attentions. They go to the same gym but barely talk. Once they begin a tentative friendship, Miles’s secrets nearly end all communication. When Peter meets Nick, he is swept away by Nick’s good looks but the irregularity and secrecy of their relationship won’t make for anything long lasting.

Nick seems like a nice guy, and he is, he even stands up to Peter’s roommate when he treats Peter really bad. He will help people in order to make them happy but he draws the lines at forming emotional bonds with others. I think he enjoys his life as it is with very little complications. He’s successful and single, and able to do what he wants when he wants. I think he really likes Peter, but having to take him in to consideration tampers with other plans in his life.

Miles is very closed off. After being left by his ex-fiance, he tries to improve himself on the outside, but he grows more bitter inside. At first Peter reminds him of his ex and he wants nothing to do with him, but after a near miss accident at the gym they begin to talk a bit and Miles likes Peter’s easy going nature. When he finds out Peter moves into a new apartment with his ex’s friend, he hopes that he can use him to find out where his ex went. But as a basically nice guy, his guilt at doing that overwhelms him and endangers their friendly dealings.

There is a fourth character that isn’t mentioned in the blurb but he is important enough that I wanted to talk about him. Ben is the character that I mentioned earlier, the guy who knows everyone. He meets Nick at a mutual friend’s party, and he was good friends with Miles’s ex. He doesn’t meet Peter until Miles accuses him of screwing up Peter’s life, but once he does meet him, he likes his personality enough that he takes him in as a roommate. I think Ben enjoys being the life of the party and having lots of connections but I think deep down, he’s feeling his years creep up on him and would like to settle down. He has good intentions but I think as a social butterfly he behaves shallowly sometimes.

This story was a journey story, with each man making discoveries and changes in their lives, with Miles and Peter making the most change. There really isn’t any sex on page, but there is some romance. I’d say that the book is more gay fiction than m/m romance, and the way the men all connect to each other in different ways made for a very interesting read. The title You Are Here felt really random in the beginning, but by the end it held a lot of meaning to the story. The importance in living in the now, of knowing that things change and if now isn’t great, it can get better. And if you like the things in your life grab on tight because they might not always be there. The tide of life is always bringing something new, but each moment is a marker that you are living it. I would definitely read more from this author in the future.I really enjoyed this book so much for all the thoughts it provoked while reading it and I definitely recommend it.

I’m very excited to announce that my third novel, entitled Best Man, should be complete by May or June of 2016. I hope to have it out sometime this year or next. Stay tuned for more details.