Why I read this book: This week is 2-4-1 week which means reading two short books, less than 150 pages and review them both. I liked the blurb and the cover and it was less than 100 pages so I knew I could read it quickly.

A copy of this book was provided in exchange for an honest review. 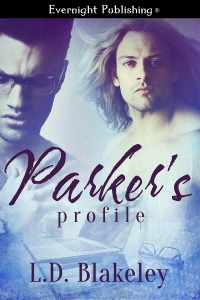 Blurb: Parker Knowles needs a date. No, really. If he can’t find one by Valentine’s Day, he’s agreed to let his sister fix him up. And quite frankly, he’d rather chew off his own arm than go out with someone of his sister’s choosing.

Internet phenom, Lane Steadman, has offered to show Parker the art of the perfect selfie. After all, an outstanding dating profile is useless without a topnotch photo, right?

Can love really be found on the Internet? Or is a real-world connection closer to Parker than he thinks?

“Yeah. Aside from that video Seth posted, my most popular pics are the ones at the beach or in a pool,” Lane explained.

“I smelled chlorine in the lobby. I’m assuming there’s a pool in your building?” the other man continued.

“Perfect.” Lane hopped up and slid his phone into his back pocket, giving Parker both the means and opportunity to ogle. And ogle, he did.

Until he realized Lane meant to take pictures of him in a bathing suit, and all ogling ground to a screeching halt. Oh, hell no

“I’m not sure if it’s such a good idea,” was what he actually said.

“What’s not a good idea?” With perfect timing, Seth strolled into the living room and handed them both a beer.

“Me posing in a pool.” Parker searched for a reason that wasn’t I don’t want to pop a boner near Lane that I can’t hide in a bathing suit.

“Maybe being in the pool will relax you,” Lane added. “Because I don’t think the beer is doing the trick.”

Parker knew the gorgeous man was trying to be helpful. Reluctantly, he nodded. “Fine. Can I grab my trunks first?”

“Unless you’d prefer to be naked.” Lane winked and Parker felt his kneecaps liquefy.

He knew Lane hadn’t intended to come across as flirtatious. Unfortunately, his brain was having a tough time comprehending that. Pull yourself together, you drooling idiot. This guy is doing you a favor. The least you can do is behave like a sane, rational adult.

Pushing aside his inappropriate and misplaced lust, Parker headed into his bedroom and quickly changed his clothes, swapping out boxer briefs for swim trunks. He could do this.

As he headed back into the living room, he grabbed the security swipe card off the key rack by the door. “Okay, let’s get it over with.”

Lane and Seth followed behind Parker and kept up a constant chatter as the three of them rode the elevator to the lobby. Parker waved a quick hello to a neighbor as they exited and made their way toward the pool. When he heard voices coming from the direction of their final destination, however, he started to have second (and possibly third and fourth) thoughts.

“There’s people in there.” He faltered outside the glass doors that led to the pool. “Maybe this isn’t such a good—”

“Nope.” Seth grabbed the swipe card from Parker. “You’re not bailing on this.”

“M’not bailing. Just … can we do it when there’s nobody around?” He was prepared to start begging when the two older gentlemen who had been swimming laps, climbed out of the pool and started gathering up their belongings.

Seth had already unlocked the door and was holding it open for Parker and Lane to join him on the deck of the now-empty pool. “C’mon, stud. Let’s take some pictures.”

“Oh God.” Parker cringed at Seth’s choice of words. As they made their way around the perimeter of the pool, he looked to Lane, who had his phone out and looked keen to get started.

“Strip, baby.” Lane’s eyes crinkled in mirth as his mouth curved into a wicked grin.

“I hate you both,” Parker muttered as he fumbled with the buttons on his shirt.

This was such a great little story. It’s short, sweet and to the point. You see the happy ever after coming and there’s not a lot of angst. Just a fun little story with enough angst about guy wanting to get date and not with one of the local guys he works with before the Valentine’s Day deadline his sister has, that it draws you in to fully. We know a lot about the secondary characters but not a lot of interactions despite their closeness with Parker or Lane. You do see Seth, the cousin of Lane and best friend to Parker, and he’s a little more rounded as a character, but the rest only have brief interactions. It doesn’t hurt the story any since it’s fairly simple plot, and I liked it all the more because of the shortness, but now I would like to know more. I like the character development and interactions enough that it was a great story about photography and getting the best picture along with the nice little story line of two guys falling in love.

With this, I give Parker’s Profile 9 out of 10 pots of gold.

L.D. Blakeley is a pragmatist with a romantic soul & a dirty mind. She loves horror movies, hot sex, and happily ever afters. She’s easily distracted by shiny things, and is a slightly neurotic, highly ambitious dreamer who enjoys dabbling in photography & pretending she can carry a tune.

In another life, L.D. was a newspaper reporter, an entertainment & music writer, travel writer, website content editor, and a marketing shill. Now she prefers to spend her time writing hot, steamy fiction (with a healthy dose of romance) about intriguing, sexy men.  Although she dreams of living some place isolated with an endless supply of wine and an infinite number of titles on her eReader, she currently lives in downtown Toronto with her husband and their rock star cat. 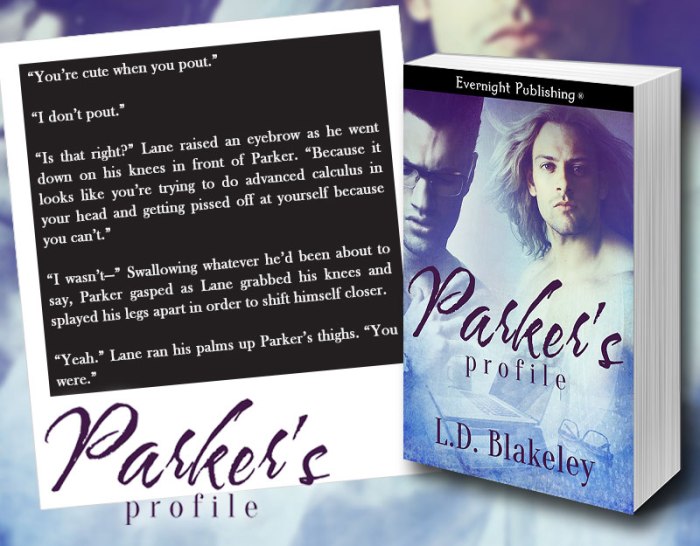