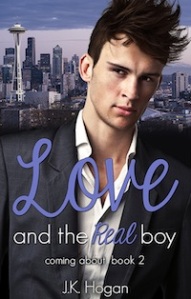 How much heartache can one man take before he breaks? That is a question Rich Langston asks himself every day.

A Seattle advertising exec who uses his designer suit and showy car like a suit of armor, Rich refuses to let the world get to him. His traumatic childhood has ruined any faith he had in people, friendship, and love. After a meltdown that led to him alienating everyone in his life, Rich agrees to help with the restoration of an antique sailboat as a form of penance.

Roped into heading up with the boat repair by his mother, marine restorer Patrick O’Dowd finds himself having to babysit a moody, spoiled rich boy with absolutely no carpentry experience. His easy-going nature is sorely tested, but he quickly realizes that things are not always what they seem; sometimes a fancy suit is nothing but an elaborate deflection from what’s real.

Through unavoidable personality clashes and fierce attraction, both Rich and Patrick explore their hidden pain and inner demons, and they end up finding with what really matters—love.

A free copy of this book was provided in exchange for an honest review.

Why I read this book:  The blurb just caught my attention.  I got the feeling this could be an angsty read, and I love me some angst.  There were also some pretty good reviews already on this book which just cemented my decision.

I enjoyed this story. I didn’t read the first in the series, I Survived Seattle, so my feelings towards Rich weren’t already colored.  I found him to be a good character despite what was said about him in the first book.  I got the impression that he was a “douche” of a character originally, but that didn’t come across much in this installment.

The story was well written and there wasn’t drama just for the sake of drama, which I really appreciated.  I anticipated there being some fighting between these two headstrong men, and those moments I predicted never happened.  The relationship between Rich and Patrick was very adult and mature.  A great change from what romance novels tend to do. Without conflict, how can the couple realize their feelings, right? NO!!!  Sometimes they turn to each other instead of away.

The sex scenes were super hot, and the photo session with Patrick as Rich’s muse was To. Die. For.  I wish I could get a copy of that spread.  🙂

This wasn’t an angsty read but it was deep and had some traumatic subjects: parent drug use, carelessness with inattention, poverty, sibling separation at young age.  There is a lot of background given into Rich’s story and it explains so much of why he is the way he is.  For those who have read the first book, I know some feel that doesn’t make right what Rich did to Justice.  Again, I haven’t read the first book, so I don’t know how truly bad the repercussions from that were, but I can tell you that Rich felt genuine regret for what he did and if he could change it, he would. Not just because it was a mean thing to do, but because he could see it hurt Justice and Rory (Rich’s former roommate and Justice’s BFF).

I do recommend you read this book, but perhaps not in order. I don’t know how my feelings towards Rich would be different had I read I Survived Seattle first.

A nice, pleasant read that (hopefully what I am about to say makes sense) you can put down and not feel panicky to finish.  It’s got a nice even flow, steady characters, cute secondary characters, and I know I will want to read about Rory next.

Where to buy: Amazon, Kobo

J.K. Hogan has been telling stories for as long as she can remember, beginning with writing cast lists and storylines for her toys growing up. When she finally decided to put pen to paper, magic happened. She is greatly inspired by all kinds of music and often creates a “soundtrack” for her stories as she writes them. J.K. is hoping to one day have a little something for everyone, so she’s branched out from m/f paranormal romance and added m/m contemporary romance. Who knows what’s next?

J.K. resides in North Carolina, where she was born and raised. A true southern girl at heart, she lives in the country with her husband and two sons, a cat, and two champion agility dogs. If she isn’t on the agility field, J.K. can often be found chasing waterfalls in the mountains with her husband, or down in front at a blues concert. In addition to writing, she enjoys training and competing in dog sports, spending time with her large southern family, camping, boating and, of course, reading! For more information, please visit www.jkhogan.com.