Marc reviews Fallow (Whyborne & Griffin 8) by Jordan L. Hawk.It was released by the author on August 3rd, 2016 and is about 212 pages long.

RGR received a free copy of this book in exchange for an honest review.

This series is still my favorite current book series out there. The adventures of Whyborne and Griffin pull me in like no other and of course I needed to read book 8 ASAP. I must say that even after 8 books, I am far from bored. Yes, sometimes certain series should just stop, because every new sequel is worse than the other and seems only created to make more money. Certain movie sequels come to mind. However, if the quality of the writing remains amazing, the stories keep being fresh and interesting, the characters find new ways to develop even as they stay true to themselves – why should they find an end. I for one am not ready to say goodbye to this amazing series and hope Jordan L. Hawk has no plans to bring the series to an end.

When Griffin’s past collides with his present, will it cost the lives of everyone he loves?Between the threat of a world-ending invasion from the Outside and unwelcome revelations about his own nature, Percival Endicott Whyborne is under a great deal of strain. His husband, Griffin Flaherty, wants to help—but how can he, when Whyborne won’t tell him what’s wrong? When a man from Griffin’s past murders a sorcerer, the situation grows even more dire. Once a simple farmer from Griffin’s hometown of Fallow, the assassin now bears a terrifying magical corruption, one whose nature even Whyborne can’t explain. To keep Griffin’s estranged mother safe, they must travel to a dying town in Kansas. But as drought withers the crops of Fallow, a sinister cult sinks its roots deep into the arid soil. And if the cult’s foul harvest isn’t stopped in time, Fallow will be only the first city to fall. Fallow is the eighth book in the Whyborne & Griffin series, where magic, mystery, and m/m romance collide with Victorian era America.

I was planning on posting my thoughts about this book much sooner, but RL prevented that until now. I must admit, after reading book 7, I couldn’t wait for the next book, because I expected the actions of book 7 to have immediate repercussions. In the first moment after realizing that wouldn’t happen in this book yet, I was disappointed. However that didn’t last long. It makes sense to give the main characters time to collect themselves, find more clues and increase their understanding of what they will face and allow them to prepare. In the end, I think it really increases the anticipation and will make the resolution so much sweeter.

One of the things that made me really eager to read this book after reading the blurb and realizing that it was not yet the big one, is the fact that readers can explore more of Griffin’s past. I really like to find out more about him and I thought it was great to see him face the demons of his past and the parents, who turned their backs to him. The new, creepy monsters don’t really make this very personal journey any easier for him. There are dangers behind every corner…

I’m glad the author took the time to resolve certain issues in a way that feels right. A major threat like the expected appearance of the masters cannot be won, if the characters are divided and I knew that Whyborne would struggle with being a part of the Maelstrom. He tends to see himself in the worst light. As a monster. I understand his fear of having drawn the people he loves most into terrible danger again and again, but it broke my heart to see him cut himself off from the others. Finally he is certain of Griffin’s love for himself, but looses faith in deserving that love.

There’s also a new potential romance that made me really giddy and as far as I know, there will even be a novella with those two characters coming soon. I think fans of this series will be really excited by this pairing!

As in all W&G books, there are many twists and turns and new revelations, but the best thing for me was the chance to get to know the masters better. We have not yet met them, but learning more about how they work actually makes me anticipate them more. I think they will be a very interesting and incredibly powerful and dangerous opponent for our heroes.

I can’t recommend this series enough and you should give it a chance, even if you are unsure about the historical aspect. Be aware that the books can get creepy and grisly at times. The characters are amazing and created with much love. The story is spellbinding and never gets boring. It almost feels like every book shuffles the cars a new and changes the game. Have fun!!! 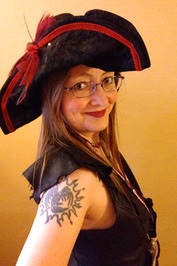 Jordan L. Hawk grew up in the wilds of North Carolina, where she was raised on stories of haints and mountain magic by her bootlegging granny and single mother. After using a silver knife in the light of a full moon to summon her true love, she turned her talents to spinning tales. She weaves together couples who need to fall in love, then throws in some evil sorcerers and undead just to make sure they want it bad enough. In Jordan’s world, love might conquer all, but it just as easily could end up in the grave.