Why I listened to this book: This month is paranormal month and I just recently found the wonder that is Jordan H. Hawk’s books.  So I thought this would be a perfect one to listen to. 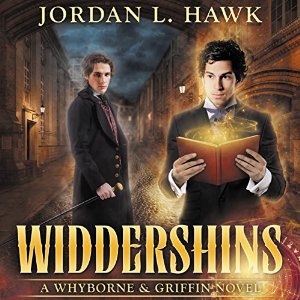 A reclusive scholar. A private detective. And a book of spells that could destroy the world.

Love is dangerous. Ever since the tragic death of the friend he adored, Percival Endicott Whyborne has ruthlessly suppressed any desire for another man. Instead, he spends his days studying dead languages at the museum where he works. So when handsome ex-Pinkerton Griffin Flaherty approaches him to translate a mysterious book, Whyborne wants to finish the job and get rid of the detective as quickly as possible.

Griffin left the Pinkertons after the death of his partner. Now in business for himself, he must investigate the murder of a wealthy young man. His only clue: an encrypted book that once belonged to the victim.

As the investigation draws them closer, Griffin’s rakish charm threatens to shatter Whyborne’s iron control. But when they uncover evidence of a powerful cult determined to rule the world, Whyborne must choose: to remain safely alone, or to risk everything for the man he loves.

Widdershins is the first novel in the Whyborne & Griffin series, where magic, mystery, and m/m romance collide with Victorian era America. Buy it today and join the adventure.

Ok so I am slow to the whole Jordan L. Hawk band wagon.  I’m not really sure why I waited so long, maybe it was fact that they are labeled “historical.”  Or maybe it was the fact all my friends raved about them and told me I HAD to read them and I was afraid they wouldn’t live up to the hype.  So when I started with ‘Hexbreaker’ I knew that I was hooked and while I waited for the next one in that series, I decided to try Widdershines.  OMG its official, I am a total Jordan L. Hawk fangirl.

So while I loved, loved, loved the ‘Hexbreaker’ world I was excited to see the difference in that world versus this one.  So while yes they are different, but no less wonderful.

I liked Whyborne from the very beginning, no know that one character that you just bond with.  The one you know will go down as one of you favorites.  He and I just click, I loved his sense of humor and his thought process.  He reminds me of my oldest son and I think that is why I connected with him from the get go.  Not the I didn’t love Griffin because I did, I just love him in a different way.  While I want to be best friends forever with Whyborne, Griffin is the one I want as my partner.  The one you want to hold you, to protect you, to keep you safe.  That is why Whyborne and Griffin together is magical.

I absolutely loved the story line in this one and I especially loved how Jordan builds this world that is so different, so detailed and so intense.  There was never a dull moment, this one is intense and all encompassing.  I really enjoyed the mystery in this book and how Whyborne and Griffin work together to solve it.  Which brings me to the ‘who done it’ part of the book. When reading mysteries I can usually pick out the bad guy fairly quickly, and while I suspected who one of them might be, I was very surprised by the others that were involved.  To put it mildly I did not see that coming, and when an author can shock me well I call it a win.

Now the secondary characters, well I wouldn’t call Dr. Christine Putnam a secondary character, more like a kick ass sidekick.  To me she is very vital to the book and I love how Jordan made her a strong, capable, assertive female in a predominantly male work environment.   An environment where most of the men look down on them, and will never see them as equals.  Dr. Putnam is exactly how I want my female characters to be.

This one has it all, mystery, laughs, tender moments.  It had me on the edge of my seat from the get go.  Now since I listened to it, I need to talk about the narration.  I am very particular when picking out audio books, and sometimes the narration can make or break it for me.  This one when I started it I wasn’t sure I would be able to continue, as it was very different from most.  But the further I got into the book the more I realized Julian G. Simmons IS Whyborne, not ifs, ands, or buts about it.  When you finish this audio you will feel like Whyborne himself was sitting having coffee with you telling you his story.

I can not recommend this book enough, and I am so glad there are more because I plan on devouring them as well.  So if you are looking for a different kind of mystery get this one.  You will not be disappointed.

Jordan L. Hawk grew up in North Carolina and forgot to ever leave. Childhood tales of mountain ghosts and mysterious creatures gave her a life-long love of things that go bump in the night. When she isn’t writing, she brews her own beer and tries to keep her cats from destroying the house. Her best-selling Whyborne & Griffin series (beginning with Widdershins) can be found in print, ebook, and audiobook at Amazon and other online retailers.