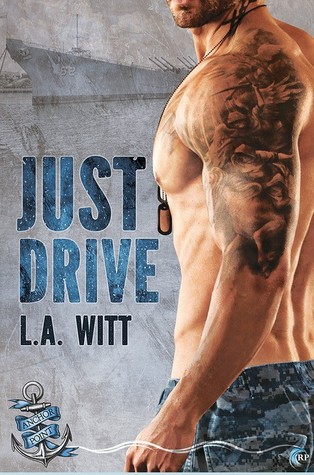 For Sean Wright, driving a cab in the tiny Navy town of Anchor Point isn’t an exciting job . . . until he picks up just-dumped Paul Richards. A drive turns into a walk on the pier, which turns into the hottest hookup Sean’s had in ages.

After a long overdue breakup, Paul can’t believe his luck. Of all the drivers, he’s picked up by the gorgeous, gay, and very willing Sean. Younger guys aren’t usually his thing, but Paul can’t resist.

One taste and neither man can get enough . . . right up until they realize that Paul is Sean’s father’s commanding officer and the last man Sean should be involved with.

With two careers on the line, their only option is to back off. It’s not easy, though; the sex and the emotional connection are exactly what both men have been craving for a long time. But Paul has devoted twenty-four years to his career and his dream of making admiral. If he’s caught with Sean, that’s all over. He has to choose—stay the course, or trade it all for the man who drove off with his heart.

An ARC was provided courtesy of Riptide Publishing via NetGalley.

Why I read this book:  I really love to read about men in uniform and you gotta love a man in Navy Blues!  Plus, this week in Rainbow Book Cover Color week and I thought “Blue” would fit in nicely. 🙂

This was a cute story about two men who happen to be around 20 years apart. Their exact age gap isn’t clear as the facts shifted one time after another, but whether it’s 20 years, or 25, does that really matter? They are not even close to the same age.

Sean is in college and Paul is a Navy Captain working to make Admiral. What makes things difficult, as if their age difference wasn’t enough, Paul is Sean’s father’s boss (base CO or Commanding Officer). Which means that Paul is responsible for signing off on his dad’s performance reviews (FITREPS). This is of course a sticky situation because if word got out about Paul and Sean being in a relationship, it could be seen as favoritism if Sean’s dad received high reviews (regardless of if they are well deserved or not).

I found this story to be very enjoyable (Witt’s dissing on Washington, DC, notwithstanding, LOL), and loved to see Paul and Sean find each other and fall in love. A hilarious addition to the drama is Sean’s inability to outright lie to his dad. If his dad asks him a direct questions, Sean feels compelled to tell the truth. Some questions are not direct and Sean can sort of wiggle around those with vague or half-true answers, just not the whole truth. Sean’s honesty starts the whole ball rolling with Sean, his dad and Paul sitting down in the living room for a “discussion.”

This is a cute story, and for all the heartbreak these two go through, it’s a very fun and lighthearted story too. I do recommend you read this.

P.S.  Sean’s experience as a military dependent isn’t true for everyone. It’s unfortunate his life was so chaotic moving around so much, leaving friends behind. It does happen, and probably is a more likely outcome for the majority, just know that it’s not true for everyone.

Where to buy: Amazon, B&N, Riptide

L.A. Witt is an abnormal M/M romance writer who has finally been released from the purgatorial corn maze of Omaha, Nebraska, and now spends her time on the southwestern coast of Spain. In between wondering how she didn’t lose her mind in Omaha, she explores the country with her husband, several clairvoyant hamsters, and an ever-growing herd of rabid plot bunnies.

She also has substantially more time on her hands these days, as she has recruited a small army of mercenaries to search South America for her nemesis, romance author Lauren Gallagher, but don’t tell Lauren. And definitely don’t tell Lori A. Witt or Ann Gallagher. Neither of those twits can keep their mouths shut…