Why I read this:  I have read a few books by Rick R. Reed and liked them.  So when I saw this paranormal, I wanted to see his take on it.

NOTE: We were provided a copy of this in exchange for an honest review. 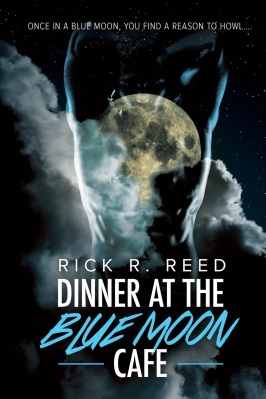 A monster moves through the night, hidden by the darkness, taking men, one by one, from Seattle’s gay gathering areas.

Amid an atmosphere of crippling fear, Thad Matthews finds his first true love working in an Italian restaurant called the Blue Moon Café. Sam Lupino is everything Thad has ever hoped for in a man: virile, sexy as hell, kind, and… he can cook!

As their romance heats up, the questions pile up. Who is the killer preying on Seattle’s gay men? What secrets is Sam’s Sicilian family hiding? And more importantly, why do Sam’s unexplained disappearances always coincide with the full moon?

The strength of Thad and Sam’s love will face the ultimate test when horrific revelations come to light beneath the full moon.

From the moment Thad stepped through the front door of the Blue Moon Café, the décor cleared up any mystery about what kind of food they served. The little café, with its mahogany bar along one wall, its grouping of maybe a dozen tables, and its faux-tin ceiling, could have been straight out of central casting for “Italian joint.” Thad saw the requisite checkered tablecloths, the oil paintings of Italian landmarks like the canals of Venice, the Coliseum, the Leaning Tower of Pisa, and St. Peter’s Square. And yes, each table sported a candle plugged into the opening of an empty green-glass Chianti bottle. A TV sat above the bar, thankfully turned off.

“Buona Sera” by Louis Prima played from the overhead speaker system. Thad was certain the rest of the evening would be peppered with the likes of Dean Martin, Jerry Vale, Rosemary Clooney, and of course, Sinatra. Underneath the music was the usual restaurant orchestra: conversation, laughter, the clink of glassware and the tinkle of silverware.

The scents of garlic, oregano, basil, and tomatoes perfumed the air. Over a counter at the rear of the restaurant, Thad could see into the kitchen: a wood-burning oven, chefs busy at their stations, the occasional upsurge of flame as one of them poured alcohol into a pan and ignited it by tipping the pan. Thad’s mouth began to water.

He already liked this place.

And he liked it even more when he saw the bartender, who was busy drying wineglasses and reaching up to hang them upside down on a rack above the bar. He was a compact little guy, olive skin and shaved head. His muscles tested the endurance of the black T-shirt he wore, and even from his vantage near the hostess stand, Thad could make out the thick black five o’clock shadow that covered his jaw. He was just the kind of guy Thad fantasized about. One who would take him roughly and be in charge.

Stop it, now! I’m in Green Lake, not Capitol Hill. This guy probably has a wife and two kids at home and would not appreciate how I’m imagining how he would look should the seams of that tight T-shirt burst and reveal a defined and hairy chest. He wouldn’t cotton at all to my thoughts of wondering how his asshole would taste, for cryin’ out loud.

Or maybe he would….

Thad grinned and bounced up and down a couple of times on his heels, feeling strangely energized and definitely a little smitten.

Shut up, horndog. Behave yourself.

Ok let me first start off by saying, when an author references The Golden Girls, well I’m hooked.  Then, he puts recipes at the end of the book — be still my heart.

When we were offered to take place in this release blitz, I hadn’t planned to do a review.  ‘Til I read the blurb.  Monsters, Sicilian family, and food.  Yep, I knew I needed to read this and see how Rick would write a paranormal.  I have read Caregiver and Chaser by him and really enjoyed them so I was excited to start this one.

You know what?  It had me hooked from the very beginning, in the best possible ways.  This in not your typical shifter story, and I like when an author can give me something different because I have read A LOT of paranormal.  So finding a fresh take on them is exciting, but this one is exciting in a very scary way.  There is something out there killing gay men, and it seems to happen at the full moon every month.  Sounds cliche right? Maybe, but when you get further in the book you will find yourself wanting to scream from the fear.  Oh my goodness this way equal parts terrifying and fun at the same time.

Thad and Sam are explosive between the sheets.  Watching them fall for each other was not an easy battle for them. Sam has secrets that he is keeping from Thad. Secrets that Thad has to wonder if his growing feelings for Sam outweighs the need to know what those secrets are. Not to mention the fact that Sams visits his grandmother are around the same time that those gay me turn up dead.  Not just dead but brutally attacked.

I really enjoy the author’s writing and how he sets up a story, I feel like I was a part of their world.  Like I could sit down and have a meal at Sam’s restaurant. He has a way of taking one character that I really thought I would like and turning them into the enemy. You never know what is actually going on, the twists & turns made this book very enjoyable.  While I have to say the ending was somewhat surprising, I think it sets it up for another book, which I know I will be getting.

I highly recommend this book if you are looking for a different paranormal, though I must tell you it is not for the faint of heart.  I also know that I will be trying the recipes at the end, YUM!!!

Rick R. Reed is all about exploring the romantic entanglements of gay men in contemporary, realistic settings. While his stories often contain elements of suspense, mystery and the paranormal, his focus ultimately returns to the power of love.

He is the author of dozens of published novels, novellas, and short stories. He is a three-time EPIC eBook Award winner (for Caregiver, Orientation and The Blue Moon Cafe). He is also a Rainbow Award Winner for both Caregiver and Raining Men. Lambda Literary Review has called him, “a writer that doesn’t disappoint.”

Rick lives in Seattle with his husband and a very spoiled Boston terrier. He is forever “at work on another novel.”