Why I listened to this audio: I had reviewed the first audiobook of this series and was interested in seeing what troubles the author would create for this couple and happily volunteered when we were offered an audio code. 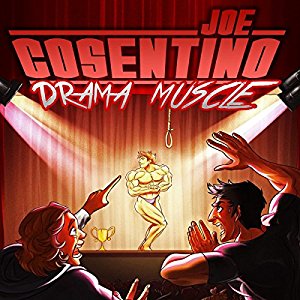 It could be lights out for college theatre professor Nicky Abbondanza. With dead bodybuilders popping up on campus, Nicky, and his favorite colleague/life partner Noah Oliver, must use their drama skills to figure out who is taking down pumped up musclemen in the Physical Education building before it is curtain down for Nicky and Noah. Complicating matters is a visit from Noah’s parents from Wisconsin, and Nicky’s suspicion that Noah may be hiding more than a cut, smooth body.

You will be applauding and shouting Bravo for Joe Cosentino’s fast-paced, side-splittingly funny, edge-of-your-seat entertaining second novel in this delightful series. Curtain up and weights up!

Narration: The narrator for Drama Muscle wasn’t the same one from the first book, and I hadn’t heard anything else from him before. However, I think he did a great job narrating. He really allowed the humor that the author writes with to come through in his narration.

Story: I am a pretty big fan of gay mysteries or mysteries that drive a plot in m/m romance. As far as the mystery writing, I think this author did a great job. Nicky and Noah make up the main couple of the story but there are other pairings among the supporting characters. There is sex but it’s not explicit so I really feel this story lends itself to gay fiction and less romance.

The story is told from Nicky’s viewpoint and the humor is very tongue in cheek. I don’t know if the author writes that way in all his books or if it is a trademark of Nicky’s personality. Sometimes he could come off as obtuse, but other times he was very observant. Noah is a character I really like, but in this book I had some concerns with his commitment to Nicky. There were moments that I was worried about the main characters. I did like some of the comical aspects but for me the author used too many similes, especially ones involving priests and altar boys. On a purely personal level I don’t care for that kind of humor, but others might very well enjoy it.

Even though Nicky and Noah work in the college drama department, they end up helping the athletic department with the annual body building competition to add more flair to the event. When one of the competitors ends up dead, the suspects are numerous. The students and mentors in the program all have quite a few sketchy dealings. Affairs are being had and some are playing favorites. The only way to eliminate some of the suspects is when they are found as dead as the first victim. I had my suspicions and really enjoyed solving the crime alongside Nicky and Noah.

The mystery in this story was the highlight for me. I also liked Nicky and Noah working through problems that arose for them in this book. The humor was hit or miss but overall with the narration, I really enjoyed listening. I would recommend the story especially to others who enjoy sleuthing in their books.

Amazon Bestselling author Joe Cosentino wrote Drama Queen the first Nicky and Noah mystery (Lethe Press), An Infatuation & A Shooting Star & A Home for the Holidays (Dreamspinner Press), Paper Doll the first Jana Lane mystery (Whiskey Creek Press), and The Nutcracker and the Mouse King (Eldridge Plays and Musicals). He has appeared in principal acting roles in film, television, and theatre, opposite stars such as Bruce Willis, Rosie O’Donnell, Nathan Lane, Holland Taylor, and Jason Robards. His one-act plays, Infatuation and Neighbor, were performed in New York City. He wrote The Perils of Pauline educational film (Prentice Hall Publishers). Joe is currently Head of the Department/Professor at a college in upstate New York, and is happily married.