Why I read this book: Marc mentioned that we got a copy in the emails, asking if anyone wanted to read it.  After reading the blurb I knew I HAD to read it.

NOTE:  A copy of this book was provided in exchange for an honest review. 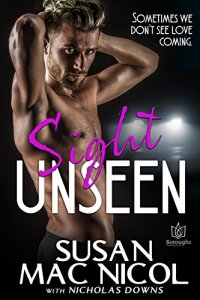 Tragedy brings together a reserved but brilliant sculptor and an outgoing gallery owner, friends whose love was sidetracked—but was always meant to be deeper.

SoCal natives, Nate and Cody have been friends since childhood. Both knew they were different—and the same. At seventeen, a stolen weekend in the Florida Keys drove their connection deeper and hotter than either could imagine. They were meant to be together. Then, for reasons only Nate knows, suddenly they weren’t.

They’re still friends. Best friends. But they’ve moved on and found other partners. The yearning remains, however, despite the long-ago secret that drove them apart, and when tragedy strikes, both men find themselves in the dark. They must grope their way back to who and what they are…which they will find in each other’s arms. Sometimes, losing one’s sight can open one’s eyes—and heart.

OMG.  I just finished this book and I have to tell you it was perfect.  I have read a few books by this author and really liked them, so when Marc said we had this one in the emails I said “sure I can take it.”  I didn’t know what I was in store for, but it was one hell of a ride.

The last few books I have read, I have rated fairly high, but this one, well this one stands out as one of the best I have read in awhile.  From the first page to the last word, the author had me hooked, in the best and most emotional ways.  I’m just floored at all that took place in this book, so much yet so relevant to the book.  I kept thinking how much more can these two go through before they find their way into each other’s arms.  Yet when they finally do, the upheaval they face to get their HEA, just made me ache for them, then cheer with them.

I equally want to keep this review short so I don’t ruin anything for you and wanting to go on and on gushing about how much I loved it.  Lets see if I can find some middle ground and tell you why you need this book in your life. Ok, so I know that the author is not American and the books she typical writes are not set in the U.S.  But this one is and I was a tad worried at the beginning it wouldn’t work.  Well she proved me wrong, yes there were times when a phrase or word wouldn’t be what I would think of as American, but it never confused me.  The other hang up I had was one of the MCs is newly blind after an accident, and I was afraid about how hard that would be to write.  Well I have to say that there must have been some extensive research that went on for this book.

Now the characters.  Two best friends, both involved with other people, yet have buried feeling for each other.  What could go wrong?  LOADS I tell you.  I wanted to hate Jon, Nate’s current boyfriend.  I really did, but you know what?  Some people just are not strong enough to handle such a drastic change in their life.  And Nate’s accident, resulting in his blindness is a drastic change, not just for Nate but for Jon who has spent the last two years of his life with Nate.  So, yeah, while I wanted to hate him for how things went down with Nate, I had to ask myself “Could you have done it?”  And the answer is, I don’t know.  What I did have issues with Jon was, some of the things he says to Nate about his blindness and his attachment to his ex.  That was a big no no for me, so when Nate is finally out of the picture, I wasn’t heartbroken.  Hopeful.

Hopeful that Nate and Cody would FINALLY get their happy ending.  But it wasn’t that easy, when is it ever in matters of the heart.  Things from their past have to come to light.  Secrets must be revealed, secrets that Nate has been keeping to himself for twelve years.  You see these two have been friends since they were young children, sharing something deeper at age seventeen, leaving Cody seeing a lifetime together and Nate telling him it never should have happened. There was literally a point where I was shaking my kindle yelling at them to “get y’alls shit together, I’m not sure how much more I can handle.”  GRRRR.  But when those secrets that kept them from pursuing a relationship with each other come to light, you can understand why Nate walked away.  This is where I throw my honest opinion in the ring and say some people don’t deserve to be parents.

I just don’t understand how some people can be so cruel to their own flesh and blood just because they love a member of the same sex.  It is not like they chose to be gay, they are born that way.  Ok enough of my rant fueled by Gaga’s words, back to the men.  So when everything is out in the open, they are finally able to love each other they way they always have.  This is where the magic happened, these two men together were HOT, and beautiful all rolled up in one brilliant book.  This author knows how to write characters you can’t help but fall in love with.  And not just Nate and Cody, but the secondary characters feel like family.  I adored all of them, but I would especially love to see Blu and Dev’s story.  Pretty please. 😉

Ok so maybe this review was on the longer side, and I hope I did it justice and you go out right now and get it, because it will be worth it.  I know this is one that will go with me for a while.  One that I know I will be re-reading when I need a hug, because yeah theirs was a hard earned HEA, but one that was epic.  I highly recommend, a SOLID 10.

Susan Mac Nicol is a self-confessed bookaholic, an avid watcher of videos of sexy pole dancing men, geek, nerd and in love with her Smartphone. This little treasure is called ‘the boyfriend’ by her long suffering husband, who says if it vibrated, there’d be no need for him. Susan hasn’t had the heart to tell him there’s an app for that…

She is never happier than when sitting in the confines of her living room/study/on a cold station platform scribbling down words and making two men fall in love. She is a romantic at heart and believes that everything happens (for the most part) for a reason.  She likes to think of herself as a ‘half full’ kinda gal, although sometimes that philosophy is sorely tested.

In an ideal world, Susan Mac Nicol would be Queen of England and banish all the bad people to the Never Never Lands of Wherever -Who Cares. As that’s never going to happen, she contents herself with writing her HEA stories and pretending, that just for a little while, good things happen to good people.