Dana reviews Can This Be Real by LE Franks. (Published by MLR Press, April 14, 2014, 131 pages) A copy was provided in exchange for an honest review.

Why I read this: This week we picked out books for our fellow reviewers to read and review. Melissa chose Can This Be Real for me because I am a fan of this author and it was a great pick. 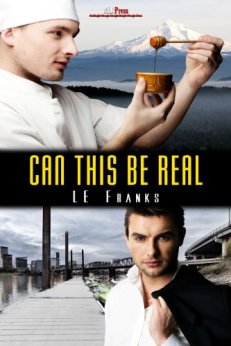 Chef Christian De Guisse can’t trust a man who doesn’t love his food, while Detective Andrew Simmons won’t let any man close who thinks he’s broken—somewhere between these two points, love is possible, but only if they get real.

When Chef Christian De Guisse accidently outs Celebrity Chef Jordan Slayer during a fight in front of The Times entertainment reporter—it only gets Christian ex-boyfriend status and a one-way plane ticket to culinary exile in Oregon. But a fortuitous meeting with Detective Andrew Simmons at the Portland airport keeps Christian and his collection of exotic herbs out of the hands of Homeland Security, starting the chemistry simmering between them. Andy isn’t much of a foodie and for a chef who communicates love through his cooking this may be one hurdle too high…until they’re finally ready to get real.

Can This Be Real is one of those books you read when you just want a good romance. Although the character Andy is a police detective this story doesn’t revolve around his job. This book is about Christian and his job as a premier chef.

The book starts with a major life change for Christian. After a short period of wallowing in his misery and a little help from his best friend, Christian shook off his cheating ex and tanked career to start over across the country.It doesn’t look like it will be a great start at first when his herbs and spices attract some attention at the airport but it does lead to him meeting Andy.

I really like Andy and Christian. They have good chemistry, but there are a few things holding them back from getting together completely. First is Christian is a little wary about trusting someone else. The other is that Christian is all about food, but Andy isn’t able to appreciate his talent or his food. It’s a little bit of opposites attracting and I worried for a little bit that they might not get past the friendship stage.

Can This Be Real is a short novel with a slow burn romance. While I like books with a lot of emotional highs and lows, there are times when a simple romance with low/no angst is needed. This book is perfect for those times. There isn’t a lot of sex in this book, which I didn’t find I missed a lot. It was much more about the characters finding a way to fit together and I thought it offered a really great ending. I’d definitely recommend it for those looking for a short and sweet romance.

At seventeen, LE Franks walked away from writing for love. Jumping head first into real life and travelling the world seemed to be fair compensation until the characters in her head demanded their turn. Now, living in the San Francisco Bay Area, surrounded by inspiration everywhere, LE is finally taking off the filters and giving the stories free rein. These days, LE can be found frequently writing about sexy men who desperately need a happily ever.

LE writes M/M Romance in a unique mix of humor and drama with enough suspense to produce fast-paced stories filled with emotion and passion and featuring characters that are quirky and complicated. Don’t expect the typical, rugged hero or sophisticated businessman with the world at their feet; LE’s men are living in the margins— they’re in the middle of their journey, doing the best they can while searching for a connection to something bigger than themselves. With a little effort, and a lot of luck, they may actually find their happily-ever-afters.

When not writing, LE wrangles an odd assortment of jobs (six— both paid and volunteer), houseguests (including pro baseball players), family, and friends. Manifesting an odd combination of contradictory talents and traits, LE is tragically honest and personally deceptive and makes the best piecrust— ever.