Dana reviews Road to the Sun by Keira Andrews (Published by KA Books, May 23, 2017, 314 pgs) A copy was provided in exchange for an honest review. 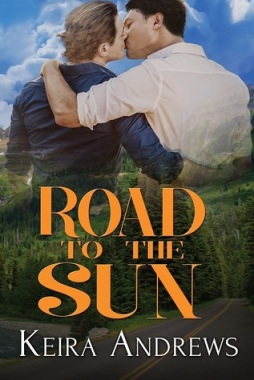 A desperate father. A lonely ranger. Unexpected love that can’t be denied.

Jason Kellerman’s life revolves around his eight-year-old daughter. Teenage curiosity with his best friend led to Maggie’s birth, her mother tragically dying soon after. Insistent on raising his daughter himself, he was disowned by his wealthy family and has worked tirelessly to support Maggie—even bringing her west on a dream vacation. Only twenty-five, Jason hasn’t had time to even think about romance. So the last thing he expects is to question his sexuality after meeting an undeniably attractive park ranger.

Ben Hettler’s stuck. He loves working in the wild under Montana’s big sky, but at forty-one, his love life is non-existent, his ex-boyfriend just married and adopted, and Ben’s own dream of fatherhood feels impossibly out of reach. He’s attracted to Jason, but what’s the point? Besides the age difference and skittish Jason’s lack of experience, they live thousands of miles apart. Ben wants more than a meaningless fling.

Then a hunted criminal takes Maggie hostage, throwing Jason and Ben together in a desperate and dangerous search through endless miles of mountain forest. If they rescue Maggie against all odds, can they build a new family together and find a place to call home?

Road to the Sun is a May-December gay romance from Keira Andrews featuring adventure, angst, coming out, sexual discovery, and of course a happy ending.

I am a fan of this author. Keira Andrews has written books where the main characters have been athletes, shifters, actors, Amish and plenty more. Each book/series offers such different types of stories, so unique and each one enjoyable. Road to the Sun is about a young dad, a factory worker from Pennsylvania, and an older heartbroken Parks Guide.

Jason has single-handedly raised his daughter. As a result, he has not focused on his own desires and needs to the point that he has no idea who he is attracted to. He only realizes he might be gay when meeting Ben during a vacation tour in Montana with his daughter. Ben has an ex who broke his heart enough that he hasn’t had any relationships for a while either. Jason isn’t an outdoorsy person, but takes the vacation for his daughter. Ben loves his work outdoors but is tired of reporting to his ex who is also his boss. Their lifestyles are miles apart physically and metaphorically, but they do have some things in common, like their love for kids.

When they meet, it is kind of a case of insta-love. Attraction + danger speeds up their feelings for each other and even they wonder if it is real. I am the type of person who is willing to accept that with love many things are possible, like love at first sight, and the concept of GFY. It doesn’t bother me at all that they feel this way for each other, so that’s why I was a little frustrated by Jason’s running away multiple times. Thank goodness that Ben is stubborn, or maybe it is the fact that he is more than a decade older that keeps him from giving up on Jason.

We meet the villain of the story right at the beginning of the book. Immediately, I hated him. It takes a few chapters before the action/suspense starts. Even though I intensely disliked the bad guy and felt for Jason and his daughter, I actually wished the danger had been dragged on a bit longer. It felt a little rushed. At the halfway point of the book, the conflict was over.

The rest focuses on the matter of Jason and Ben figuring out if they can make things work with the long distance between them, their different lifestyles, and trying to recover from the traumatic events that happened. I liked the side characters in this book. Jason’s daughter Maggie is really sweet. Ben’s ex isn’t as bad as he seems at first. Then there is Jason’s family who show up, adding to the confusing feelings he is experiencing.

There is definitely some sweetness in this book, a bit of sexiness, some unexpected family drama, and a good dose of suspense. I really enjoyed this book and would definitely recommend it.

After writing for years yet never really finding the right inspiration, Keira discovered her voice in gay romance, which has become a passion. She writes contemporary, historical, paranormal and fantasy fiction, and–although she loves delicious angst along the way–Keira firmly believes in happy endings. For as Oscar Wilde once said, “The good ended happily, and the bad unhappily. That is what fiction means.” Find out more about Keira and her books at http://www.keiraandrews.com.