Eloreen reviews A Winter in Rome by Francis Gideon (Published November 11, 2015 by Less Than Three Press. Length: 142 pages) A copy was provided in exchange for an honest review. 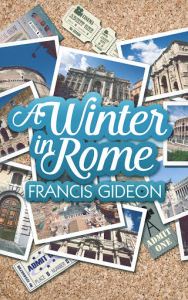 Craig is a man adrift, never quite feeling like he belongs or like he’s as successful and settled as those around him—especially his lovers, Alan, an art professor he met while in college, and Sybil, who tutored him throughout his Italian class. When Alan goes to Rome life becomes even shakier and the only grounding point becomes the corkboard of memories Craig creates for the three of them.

By the time Alan returns, Craig isn’t certain how his relationships will change—especially when Alan starts to fall for Sybil, bringing two pieces of his world completely together and leaving Craig worried it will create a world that has no place for him.

I liked the cover and the blurb and so picked A Winter in Rome as my first review post for the RGR Trans Awareness Event. I went into this story having one concept of menage relationships expecting an all male menage, and found myself pleasantly surprised with Sybil a born female and it being more of a polyamory/polyamorous relationship with Craig at the center of a V relationship and Alan and Sybil his lovers. As I’m polyamorous, or poly for short, in a similar V poly relationship with my partners, a female and a male, and the male is the center of the V for the last 20 years, it’s great to see this type of relationship in a story. The poly type of relationships– about as many types as transgender and asexual sexual identities comprise– is not often represented in literature, and it was wonderful to see it.

There’s a lot of angst that Craig works through as we see the story unfold through his eyes. He meets and falls in love with Alan then Sybil a few years later. Alan is gay and understanding of Craig’s relationship with Sybil and Sybil knows about Alan immediately. It depicts the communication needed between all partners represented by the cork board while Alan is away. The story of Craig’s growth to the back drop of Alan’s spending months away in Rome then returning with all three of them changing in subtle ways. It’s not a fast pace story, but it grips you hard and you have to finish it in one sitting. It’s more of an intellectual romance as we watch Craig work through his insecurities, and seeing Alan and Sybil grow closer themselves. It’s not until later in the book that the transgender identity is revealed with Sybil realizing she is more male than female. There are hints with declarations she says in various scenes and the couple of discussions Craig and she have while Alan is away.

The romance, the like the story, is not hot and heavy and some stories could be, but the scenes that are depicted are sweet and telling and have a hotness level on their own. There are separate MF and MM sex scenes and one where they are all together. Each one show the almost gentle romance they have between the pairs and each other.

While I enjoyed the story and the characters, not having confirmation on Sybil’s transgender identity near the end tripped me up a little. As each person’s journey to their identity is very subtle and could take a long time to decide, I do believe A Winter in Rome depicts a realistic menage relationship and that not all relationships and identities are clear defined. Just like any relationship changes over time, especially if one partner leaves for a long time, it’s great to see that even poly relationships persevere.

Overall, I give A Winter in Rome 9 out of 10 Pots of Gold

Francis Gideon is a nonbinary writer who dabbles in romance, mystery, fantasy, historical, and paranormal genres. Francis credits music, along with being an only child to a single mother, as why they write so much now. Long nights at home were either spent memorizing lyrics to pop-punk bands or reading voraciously. Add a couple of formative experiences in university, a network of weird artist friends, and after years of writing stories Francis never showed to anyone, they now have books to their name.

After receiving an MA in English literature, Francis wanted to do something a bit more fun. They soon found the LGBTQ romance community and fell in love on the spot. Since then, Francis has attempted to balance writing romances with as many different types of couples as possible while also attending school for their PhD. When not writing fiction or teaching university classes, Francis works on scholarly articles on everything from character deaths in the TV show Hannibal, the online archive of Canadian poet and artist P.K. Page, and transgender representation on YouTube. Francis is a middle name, used to keep students from Googling their teacher and asking far too many questions.

Francis lives in Canada with their partner, Travis, where they often spend nights disagreeing about what TV show to watch and making bad puns whenever possible. Travis receives dedications in Francis’s novels because he tolerates Francis’s long hours and listens to random story ideas late into the night. Francis also might be a bit of a hopeless romantic—as if you didn’t already guess.