I had a good idea of what I wanted to say with the story and how I wanted to say it; it was a very “London” book and not just in terms of the setting. At the time, my sister was living in the East End of London in an apartment block that became the inspiration for Stan’s flat. (Everything from the interior layout to the entry system of Stan’s flat was pretty much inspired by Bow Quarter!) When I’d stay with her on the weekends we walked all over London, with Camden being one of our favourite places to visit for lunch.

My sister had a neighbour who was a very tall, slim man who had a beard, and wore fabulously tight leather trousers, heels, and full makeup. She often passed him on her way to work and they became passing acquaintances. I think that was probably where my first inspiration for the character of Stan came from.

At the time I was writing, it felt like the story of Stan finding love and acceptance could only happen in London. Maybe that’s an unfair assessment, but I wanted him to discover a group of people who love him for exactly who he is, not despite who he is. That meant more than finding the right lover for Stan, but also a whole cast of characters, from Tone (of course) and Kirsty and Sherrie and the rest of the band. Though Stan had travelled the world with his career in fashion, it was London where he finally found somewhere he could call home.

I’m so pleased I found a home for the story in Dreamspinner Press’s ‘Perchance to Dream’ line, which is dedicated to books set in Britain and the Commonwealth. It meant I had the freedom to work with my editor and keep those specific “British-isms” in the story which grounded it so firmly in London. Back in 2013 I didn’t think there would be a publisher for a story about a gender-fluid, nonconforming character, or an audience who would want to read about him. I think by the time The Impossible Boy was published it felt like some of the sentiment in the book was a little old-fashioned. I was so overwhelmed at how ready people were to accept Stan and his love story… it really has been an incredible journey. 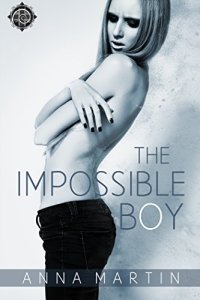 This is not your average love story.

Ben Easton is not your average romantic hero. He’s a tattooed, badass, wannabe rock star, working in a perfectly horrible dive bar in Camden Town. His life is good, and he’s totally unprepared for how one man will turn it upside down.

Stan isn’t your average heroine. As a gender-fluid man, he proudly wears his blond hair long, his heels sky-high, and his makeup perfectly executed. A fashion industry prodigy, Stan is in London after stints working in Italy and New York City, and he quickly falls for Ben’s devil-may-care attitude and the warm, soft heart Ben hides behind it.

Beneath the perfect, elegant exterior, Stan has plenty of scars from teenage battles with anorexia. And it only takes the slightest slip for his demons to rush back in while Ben is away touring with his band. With the band on the brink of a breakthrough, Ben is forced to find a way to balance the opportunity of a lifetime with caring for his beautiful boyfriend.

Why I read this book:  After reading the blurb I thought this would be a good one to review for RGRs Trans Aware Event.

NOTE: We were provided a copy in exchange for an honest review.

I have seen this for a while now on DSP but haven’t really given in a second glance mainly because of the cover.  It just didn’t grab me the way some book cover’s do.  But when we had the chance to review for this event, I read the blurb for it and thought I would give it a try, because you know what they say: don’t judge a book by it’s cover.  That was very true for this one.

This one takes place in London so some of the phrases and words didn’t make much sense to me but it was no less a wonderful story.  First there is Stan, oh my fierce, kinda broken Stan.  At first I thought his story would be geared more towards Stan transitioning into a female, but that is not necessarily the case in this one.  Stan is gender fluid, wears dresses, makeup and heels all the while rocking the heck out of them.  But he is most definitely male and he is ok with who he is on the outside and what is between his legs.  He makes no apologies for that.  No, his issues are much deeper that what he wears.

Enter Ben, the tattooed, kinda rocker, bartender at the local dive.  Oh my goodness, I know a lot of people that fell hard for Stan from the beginning, but it was Ben that stole my heart.  At first glance you would think he is this tough rocker covered in tattoos.  But oh my sweet sweet Ben, how I love you.  He sees this beautiful, blond boy, wearing women’s clothing and it doesn’t seem to faze him any at all.  Oh this just made me so filippin happy.  You see there is so much judgement in the world now, it was refreshing to see total acceptance of someone’s differences.  So this reason alone was why I fell so hard for Ben.

Ben and Stan together was something kinda magical.  But oh their road to happy ever after is not an easy one.  You see Stan has demons that he thought he had under control, but resurface thus making the two of them face something so huge.  But watching them face it together was testament on how a real relationship handles the tough times.  This was truly enjoyable to read, and I am so glad I took the chance on this book.

I highly recommend this book if you are looking for something nonconforming with brilliant secondary characters.  It was a fun read with real life problems that will make you fall for these characters.  Thank you Anna for letting me get to know these men and their friends.

Comment below for your chance to win this handmade infinity scarf donated by Rainbows4All.  (You can find them on Etsy or contact them at rainbows4allrgr@gmail.com).

You need to be 18 years or older to participate. Void where prohibited, US shipping only. Etc.

Anna Martin is from a picturesque seaside village in the south west of England and now lives in Bristol. After spending most of her childhood making up stories, she studied English Literature at university before turning her hand as a professional writer.

Apart from being physically dependent on her laptop, Anna is enthusiastic about writing and producing local grassroots theatre (especially at the Edinburgh Fringe Festival, where she can be found every summer), visiting friends who live in other countries, Marvel Comics, learning new things, and Ben & Jerry’s New York Super Fudge Chunk.

Although her most recent work is in the LGBT Adult Fiction genre, in the past Anna has worked on a variety of different projects including short stories, drabbles, flash fiction, fan fiction, plays for both children and adults, and poetry. She has written novels in the Teen/ Young Adult genre, Romance, and Fantasy novels.

Anna is, by her own admission, almost unhealthily obsessed with books. The library she has amassed is both large and diverse; “My favourite books,” she says, “are The Moonstone by Wilkie Collins, To Kill a Mockingbird by Harper Lee and Oryx and Crake by Margaret Atwood.” She also several well-read copies of Michael Crichton’s Jurassic Park books and re-reads the Harry Potter novels with almost startling regularity.

​Anna claims her entire career is due to the love, support, pre-reading and creative ass-kicking provided by her closest friend Jennifer. Jennifer refuses to accept any responsibility for anything Anna has written.