Dana reviews Kidnapped by the Pirate by Keira Andrews (Published by KA Books, October 26, 2017, 259 pages) A copy was provided in exchange for an honest review. 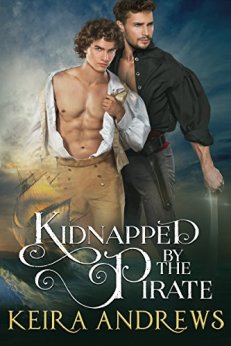 Will a virgin captive surrender to this pirate’s sinful touch?

Nathaniel Bainbridge is used to hiding, whether it’s concealing his struggles with reading or his forbidden desire for men. Under the thumb of his controlling father, the governor of Primrose Isle, he’s sailing to the fledging colony, where he’ll surrender to a respectable marriage for his family’s financial gain. Then pirates strike and he’s kidnapped for ransom by the Sea Hawk, a legendary villain of the New World.

Bitter and jaded, Hawk harbors futile dreams of leaving the sea for a quiet life, but men like him don’t deserve peace. He has a score to settle with Nathaniel’s father—the very man whose treachery forced him into piracy—and he’s sure Nathaniel is just as contemptible.

Yet as days pass in close quarters, Nathaniel’s feisty spirit and alluring innocence beguile and bewitch. Although Hawk knows he must keep his distance, the desire to teach Nathaniel the pleasure men can share grows uncontrollable. It’s not as though Hawk would ever feel anything for him besides lust…

Nathaniel realizes the fearsome Sea Hawk’s reputation is largely invented, and he sees the lonely man beneath the myth, willingly surrendering to his captor body and soul. As a pirate’s prisoner, he is finally free to be his true self. The crew has been promised the ransom Nathaniel will bring, yet as danger mounts and the time nears to give him up, Hawk’s biggest battle could be with his own heart.

This May-December gay romance from Keira Andrews features classic tropes including: a tough alpha pirate too afraid to love, a plucky virgin captive half his age, enemies to lovers, first-time sexual discovery, and of course a happy ending. 85,000 words.

Buy from Amazon || Add to Goodreads

I am a big fan of this author. I was so excited when I saw she wrote this story, a m/m take on so many historical romances that I was a fan of before I discovered m/m romance. A captive falling in love with a pirate is a risky match. Same sex relationships in historical times are difficult enough to have HEA’s and I wondered how the author would set up a way for them to stay together after the ransom is paid and revenge is had. I had faith that Keira Andrews could pull it off but she definitely made me nervous for a little while.

To make a good romance story featuring a pirate, obviously the character has to be more than meets the eye. Hawk used to be a Privateer that sailed for England. Nathaniel’s father set him on a path to piracy and Hawk isn’t about to forgive him for that. Even though Hawk had loved the water, a part of him has wanted to settle down and live in peace with a partner by his side. As a pirate, Hawk does what he has to in order to survive. He’s killed and stolen but he won’t allow his crew torture or rape. I’d say his character was honorable even before taking on Nathaniel, who really brings out the good man he used to be.

Nathaniel is smart and more active than most that have the same place in society. His yearning to run and swim and his inability to read only earns him disapproval from his father. There’s no doubt his father is the villain in this story. Father and son have no feeling of connection, but Nathaniel is very close to his sister. When Hawk boards their vessel he tries to protect his sister even though he knows he is no match for the pirate. He is a brave man but he also hides his attraction to other men. I’m not sure if he doesn’t feel a sense of relief that he is unable to get to the island and to the girl his father picked for him to marry.

As Nathaniel and Hawk make their way to a trade off, Nathaniel shows Hawk his courage and true desires. Hawk softens towards him when he realizes that Nathaniel isn’t just like his father. He lets himself feel a little bit of his old dreams, and shares some of his past with Nathaniel. I really loved Nathaniel for how he remained true to himself in every situation he was put in, and for how he was able to help Hawk access parts of himself he lost when he became a pirate. The side characters were very good and well developed. I liked Nathaniel’s sister and her husband who cares enough for his wife to work with her father but also knows not to admire or emulate the man. I liked some of the crew on Hawks boat as well. I felt the story was well thought out and executed perfectly. I love the way the two men do finally get together and the life they forge after. I thought the author’s take on this pirate romance was unique and very enjoyable, and I’d definitely recommend it.

After writing for years yet never really finding the right inspiration, Keira discovered her voice in gay romance, which has become a passion. She writes contemporary, historical, paranormal and fantasy fiction, and–although she loves delicious angst along the way–Keira firmly believes in happy endings. For as Oscar Wilde once said, “The good ended happily, and the bad unhappily. That is what fiction means.” Find out more about Keira and her books at http://www.keiraandrews.com.