Erryn reviews ‘The Master Will Appear’ by L.A. Witt. The ebook was published May 16, 2017 and is 447 pages. The audiobook version of this story was narrated by Michael Ferraiuolo, released on January 2, 2018 and is 12 hrs and 59 mins long. A copy was provided for an honest review.

Why I read this book: I bought the book when it was released but when I saw it was on audio, I grabbed the opportunity. 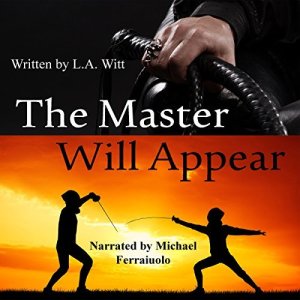 Dr. Mikhail “Misha” Budnikov takes one look at fellow fencer Ryan O’Connor and instantly knows his type. The undisciplined hothead is all ego with no finesse and even less control. In short, Misha’s pet peeves personified. To put the arrogant kid in check, Misha challenges him to a sparring match, which he predictably wins.

Not so predictably, Ryan asks him to be a mentor and show him how to fence. Startled by the moment of humility, Misha agrees.

What begins as fencing lessons becomes something much hotter, and before they know it, Misha is giving Ryan an entirely different kind of education. Dominance, submission, pain, pleasure—at the hands of an older, experienced man, a whole new world is opening up for Ryan.

As the trust deepens and their bond strengthens, though, Ryan retreats because that sham called love left him jaded long ago. Cynical beyond his years, he’s not letting his guard down, least of all for a thrice-divorced man twice his age.

Now Misha has to find a way to crack through those defenses…or accept defeat and walk away from the submissive who might just be the love of his life.

Dr. Mikhail Budnikov is a sucker for repentance and humility.  After beating the cocky Ryan O’Connor in a fencing match, Misha is surprised when the humiliated Ryan asks for lessons.

Thus begins the Mentorship of Ryan.  At times, the twenty-year age gap is apparent, other times it disappears completely because despite the fact Misha is thrice-divorced, it is Ryan who is beyond jaded.

To say Ryan’s family is dysfunctional would be generous.  Ryan has moved clear across the country to get away from them, but this wonderful invention called the telephone makes those miles vanish with a simple chime.

Mikhail, though, sees past the façade and into Ryan’s soul.  He also suspects Ryan needs a guiding hand to reach his potential – as both a fencer and a man.

Mikhail is a self-proclaimed mild-Sadist.  And he is.  He guides Ryan through scenes where he inflicts pain on the very-willing Ryan.  But their relationship is far deeper than that.  Ryan needs stability and someone who won’t hurt him.  Mikhail’s ability to calm and steady Ryan is remarkable, but Ryan’s past experience has taught him nothing good can last.

Ryan is one of those men you just want to embrace.  His tough exterior hides a lot of pain and I found him relatable.  And Mikhail’s willingness to patiently guide the younger man makes him a mentor to respect and, at times, admire.

The ‘scenes’ are hot, but the development of the relationship is what made this book one I enjoyed.  I am a sucker for a good love story.

Despite the D/s relationship, it is an equal partnership.  In the end, the question is whether Ryan can overcome his fears.  The fact he eventually opens up and tells Misha things he’s never shared with anyone is a promising sign.

Oh, and a Lucky Pierre doesn’t hurt.  In fact, it sounds like fun.

Michael Ferraiuolo is one of my favorite narrators.  He gives each character a distinct voice and his Russian accent sounded good to me.  He is never intrusive, which I appreciate.

L.A. Witt is an abnormal M/M romance writer who has finally been released from the purgatorial corn maze of Omaha, Nebraska, and now spends her time on the southwestern coast of Spain. In between wondering how she didn’t lose her mind in Omaha, she explores the country with her husband, several clairvoyant hamsters, and an ever-growing herd of rabid plot bunnies.

She also has substantially more time on her hands these days, as she has recruited a small army of mercenaries to search South America for her nemesis, romance author Lauren Gallagher, but don’t tell Lauren. And definitely don’t tell Lori A. Witt or Ann Gallagher. Neither of those twits can keep their mouths shut…