Dana and Melissa review Reaping Havoc (Reaping Havoc Book 1) by AJ Rose (Published by The Grim Writer Press, November 10, 2017, 282 pages) A copy was provided in exchange for an honest review.

Why we read this:

Dana: I read this book before because I am a big fan of AJ Rose. When I heard Melissa was reviewing it I asked to join in and reread it. I remember liking it so much but needed a refresher before I reviewed it.

Melissa: I was just so obsessed with the blurb, I mean – Reapers, secrets, immortality, and death!  Count me IN!! And I have been wanting to read an AJ Rose story for a long time and thought this would be the perfect introduction. 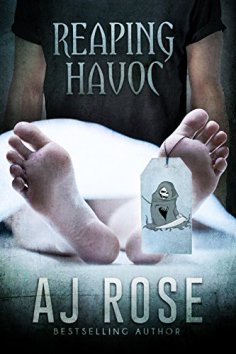 Blurb: No one asked Mitch Seeker if he wanted to be a grim reaper. He didn’t sign up for the rumors, the lack of friends, or the erratic schedule. He doesn’t want to go through life watching people die. Especially not a man he loves. Mitch’s solution is simple—don’t fall in love. He’ll never have to explain why he doesn’t age or why he’s around death so often. Most of all, he will never be a widower.

But when his head is turned by world-class skier Nate Koehn, Mitch believes he may have the answer. If the soul attached to Nate is any indication, Mitch has found himself another reaper, in which case, his undeniable feelings don’t have to be suppressed. However, the spectral tag-a-long is only the beginning of Nate’s burdens. After a catastrophic loss, Nate is no stranger to grief and the hole it leaves behind.

The question they both must answer is loud and clear: is the pain of losing love worse than the pain of never having loved at all?

Rereading this book was just as enjoyable as the first time. It’s a meet cute story with a twist. Nate is new to town and almost by default Mitch is the only dating prospect available. Except the townspeople all regard his family in fear. I want to start off by saying how much I appreciate that Nate isn’t the type to listen to the naysayers.

It’s not a spoiler because the blurb reveals that Mitch is a grim reaper, and it has him living a lonely life with no romantic interests or friends. Outside of his family he only has his dog. The soul attached to Nate confuses Mitch and he begins seeing him in hopes that Nate is someone he can share his unnaturally long life together with.

When I first read this book, there were a few reasons that the story really appealed to me. First, I am an AJ Rose fan. Second, was the reaper aspect. I was a fan of tv show Dead Like Me and I loved the reapers in that program. There isn’t all that much alike between this book and the show but a few small comparisons. The author’s reference to the show made me laugh as well. I just love recognizing pop culture references in books.

The mythology of the reapers in Reaping Havoc is so cool to me. There is so much to find out, like the reason Mitch is a reaper in the first place. What happens to the souls after the reaper leads them to the white light and to souls that stick around past their light. I absolutely love the authors ideas because it just built this world more solidly. Also the author’s portrayal of Divinity, the heavenly hierarchy, is awesome. As someone who considers themselves religious, I really appreciated it.

Getting to the romance portion… Nate and Mitch are an awesome couple together. There is tension and a stop start to their relationship because of Mitch’s secret. Nate is no stranger to loss and he finds someone who can understand him in Mitch even if he isn’t allowed to really know Mitch. When Mitch lets go of his stubbornness and grabs at a chance for happiness that might be fleeting, their path still isn’t easy. There are choices that they need to make. Hard choices that made me feel bitter for a bit. However, I did know there was a second book, so I was able to read through with some confidence of an eventual HEA.

The secondary characters are great. Katherine, Mitch’s boss, is funny. His family is wonderful and accepting. Nate’s few friends in town are cool too. There are two strong main characters and creative world building. The ending was great. There isn’t a bad thing I can say about this book. I recommend the book and series. Now, I am excited for the reread of book two.

This was so amazing! I was just sucked in right from the start and I didn’t want to let go. The plot was so original and I thought it was well planned and executed. The characters are fabulous. Mitch and Nate are funny; I had so many moments where their antics just cracked me up. 🙂

Reaping Havoc is the first book of an undetermined length series. As the blurb says, Mitch is a reaper who doesn’t age (you get more backstory on the how’s of this later) and he isn’t happy about any of it. He wants to find someone he can love and grow old with and have a regular life. So when he meets Nate, he initially pushes him away. Due to circumstances around Nate’s past and now present, Mitch is confused and does an about face regarding his relationship with Nate.

There is the expected relationship drama between Nate and Mitch and I just wanted to bop Mitch over the head and tell him to stop panicking and to go after Nate. Thankfully Mitch’s family basically does this for me and Mitch sees he can’t just throw away all the happiness he could have with Nate just because he is afraid.

Since I read the blurb to book 2 I had an idea of what was going to happen, but I was unsure how it was going to be pulled off. I was anxiously waiting to see how this story ended and I wasn’t disappointed. Lets just say an angel named Katherine is involved and she and her “team” are quite creative and tricky. 😉

This whole story was just so clever and fun and original. I can’t wait to read book 2 and see these men again, especially Sadie, Mitch’s dog. I can’t say enough good things about this book and demand you all read it. Yes, it does deal with religion and God(s), Heaven and Hell, angels and battles over souls. So if that isn’t your thing…eh, maybe you should still give this one a try because it’s really that good.

I give this 5 HUGE stars/10 BIG Pots and I can’t wait for the next one.

It began with a Halloween themed short story assignment from a second grade teacher, and from then on, AJ Rose fell head over heels in love with writing. Time has seen the beginning and end of many things, college and graduation, a finance career, and a marriage, and through it all, writing has been her first love. Now, AJ is also head over heels for her wife, fellow author Kate Aaron, who gets it, the twitchy fingers when word counts are low too many consecutive days, the thousand-yard stare when an idea turns AJ’s vision inward, and the jitters when the word-babies go out to meet the world. Nothing could stop the tall tales about imaginary people that refused to be ignored. With a life full of this much passion, it’s no wonder AJ chose romance. The voices in her head are mostly of the male persuasion, so m/m romance was about the only option. But don’t be surprised if the occasional ghost still pops up.

AJ’s work can be found on Amazon, Barnes & Noble, iTunes, Page Foundry, and Sea to Sky Books. AJ tweets as @_AJRose and blogs at http://ajrosewrites.wordpress.com, where there is more information about future titles.