Dana and Melissa review Reaping Fate (Reaping Havoc #2) by AJ Rose (Published by The Grim Writer Press, May 4th 2016, 277 pages). A copy was provided in exchange for an honest review.

Why we read this:

Dana – Wednesday is cereal day and we were looking for books featuring serial killers to review. 😉  I loved this series the first time I read it, and reread it so that I could better share my thoughts in a duo review.

Melissa: After reading Reaping Havoc, there was no way I was going to miss Reaping Fate. 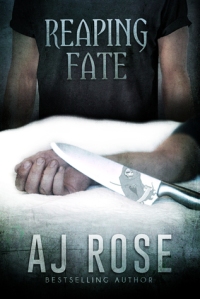 Blurb:  For Nate Koehn, the worst part of being a reaper is maintaining his compassion without becoming too involved with the souls in his charge. He’s always been sensitive to others’ hurts, and there is no hurt bigger than death, with which he’s already intimately familiar. The learning curve is steep, but the perks of the job—spending the next 300 years with the love of his life, his husband Mitch Seeker—are unmistakable. For Nate, death is a lifelong commitment.

Then Mitch is assigned to reap a serial killer’s victim.

Mitch and Nate are willing to go to just about any lengths to bring the killer to justice, but Divinity has a plan for everyone, and the reapers are at risk of being terminated themselves if they meddle too much. Mitch knows better than to tempt fate, but Nate isn’t wired to sit idly by while innocent people lose their lives to a vicious killer.

Nate sets out to balance the scales of justice for the souls in their charge, but what happens when he becomes the killer’s bug in the web? Can he stop a killer without exercising his own free will or putting those he loves in the crosshairs? Only Death knows, and he’s not talking.

Warning: Contains graphic descriptions of violence, which may be too intense for some readers. Reader discretion advised.

In my review for the first book, I called it a meet cute story. Book one was all about Nate and Mitch as a couple. Their falling for each other, revealing secrets and making choices in order for their lives to be long, happy ones. In this book, they are an established couple. There are some extremely hot moments between them, and their love for each other is still as sweet and strong as it was in Reaping Havoc. Reaping Fate is about focusing more on their jobs than their love. More specifically, balancing wrong and right when your next reap comes at the hands of a serial killer.

Because of Mitch’s past being born into a legacy of reapers, he is used to just doing his job with the minimum amount of questions. Nate is newly instated and for him it is a lot harder to ignore someone getting away repeatedly with murder. This gives this story more of a mystery flair. The whodunnit is obvious in this book, but it’s the need to find proof and catch the killer without putting others in danger or violating the contract Mitch and Nate signed.

This was a really good book. I really identified with Nate’s need for justice. I feared for him and Mitch when the killer began to focus on the two men. Bad things happen to those they care about. I wanted to scream at the actions of this sociopath. I could understand why Mitch wanted to ignore things in hopes that it would all go away but like Nate, I also knew that there was no going back. So many intense feelings. And thank goodness for reaper healing.

There is a little more revealed in this book regarding the mythology of Divinity and Death. Mitch’s family are back in this book, and Nate’s friends Wes and Troy feature more than they did in this first book. Especially since Wes is a police officer they try to subtly steer in the right direction. A new reaper and his partner join the series. Sebastian and his husband Richard are the only other gay couple in town and they become fast friends. Sebastian also lends his experience as a reaper to help guide Mitch and Nate along with Mitch’s dad. I loved the chemistry between the two couples and I hope the author finds some reason for them all to get another story.

Okay, yep, I am officially hooked on this series. I can only hope more are going to be published soon. Our band of reapers is back and this time they have a serial killer to watch out for…because they are certainly watching Mitch and Nate.

In order to appreciate Reaping Fate, you must read Reaping Havoc first (see our duo review here), as it’s all connected. And OMG, this second installment was just great! I knew from the blurb a serial killer was on the loose, and when I read the scene showing Mitch doing his reaper job to collect the soul of one the victims, I was just flabbergasted. Talk about bizarre and weird!

The majority of the story is about Nate trying to stop a serial killer without breaking his reaper “don’t interfere in the ‘plan'” contract. It causes a lot of tension between Nate and Mitch, and it was hard to see them so at odds, especially when they needed each other the most. We learn early on who the killer is, but it’s hard to prove since Nate can’t just come out and say, “I know they are the killer because I’m a reaper.” Yeah, that isn’t going to go over very well, despite the fact that Nate’s BFF Wes (a cop) believes Mitch has psychic powers. They need actual physical evidence, and the killer knows they are looking for it.

I didn’t want to put this down and was reading as fast as I could because I needed to know how Nate was going to try and stop the killer without being punished himself. Once again this story deals with God, Heaven and Hell, angels, Death, and on page killing and torture. It’s brutal how this ends but our MCs make it out ok. I have no idea what theses guys could be put thru next, but I know it’s going to be amazing and I will be first in line to read the next book.

It began with a Halloween themed short story assignment from a second grade teacher, and from then on, AJ Rose fell head over heels in love with writing. Time has seen the beginning and end of many things, college and graduation, a finance career, and a marriage, and through it all, writing has been her first love. Now, AJ is also head over heels for her wife, fellow author Kate Aaron, who gets it, the twitchy fingers when word counts are low too many consecutive days, the thousand-yard stare when an idea turns AJ’s vision inward, and the jitters when the word-babies go out to meet the world. Nothing could stop the tall tales about imaginary people that refused to be ignored. With a life full of this much passion, it’s no wonder AJ chose romance. The voices in her head are mostly of the male persuasion, so m/m romance was about the only option. But don’t be surprised if the occasional ghost still pops up.

AJ’s work can be found on Amazon, Barnes & Noble, iTunes, Page Foundry, and Sea to Sky Books. AJ tweets as @_AJRose and blogs at http://ajrosewrites.wordpress.com, where there is more information about future titles.