Erryn reviews ‘My Name is Ayla’  by Phetra H. Novak. The ebook was published May 1, 2017, 142 pages. A copy was provided in exchange for an honest review.

Why I read this book: Honestly, I was asked.  I am so glad I was. 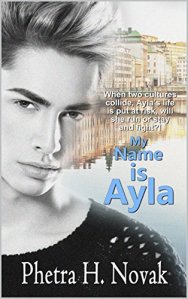 Everyone should be safe in a liberal country like Sweden.
But, Peter Andreasson, a Police Officer with the Gothenburg Police, knows that isn’t always the case. The day he walks into the hospital emergency room and meets a badly beaten woman, Ayla Aydin, he is heartbroken but drawn to her strength.
Ayla knows who she is.
She’s proud of the person she has become.
It’s her third generation Swedish family that cannot accept her transformation from male to female and she is not prepared for what comes next. She has dishonoured them, and for this, she must pay the ultimate price.
When two cultures collide, Ayla’s life is put at risk, will she run or stay and fight? Will she escape their wrath even with Peter by her side?

Phetra’s tagline is: Nordic tales that will seduce you.  I love that.

Warning: this book does not have a happily ever or even a happy for now, but that doesn’t mean you don’t have to read this book.

Everyone should read this book.

Early in the book, Novak says, “What most Swedes did not understand, not living with the stigma of two cultures, were the difficulties facing those who must live in the land of the in-between”.  Wise words.  Immigration is an issue facing almost every country in the world.  Whether you’re from a country people are fleeing (because of war, poverty, famine, political instability, or gang violence) or a country which people are trying to get into (legally or illegally), these are big issues that have global implications.

This book, however, draws it down into the microcosm of one family, one son, and one police officer.  When Peter Andreasson is called to the hospital to deal with a victim of domestic violence, he quickly understands that it is far more complicated.  His victim, who has very serious injuries, says:

Obviously, Ayla is transgender.  At this point, I will comment that I know several people who are transgender.  I see some of what they go through and it breaks my heart.  I want them to be accepted and embraced, but I often see a society that marginalizes them.  Transgender teens are far more likely to commit suicide and are statistically far more likely to be victims of violence and abuse.  The stories are heartbreaking and nauseating.  That there are people in the world who feel they have to right to attack and even kill someone because of their genitals is appalling.

And while we’re discussing genitals – there is often too much focus on them.  A person should have the right to identify however they are most comfortable, regardless of what is between their legs and what is between their legs is no one’s business unless they are the person’s doctor or potential sexual partner.  As Peter says to a co-worker, “How a transgender woman has sex – if that is so f-ing different from any other woman – and whether or not she has had an reconstructive surgery is none of your f-ing business!”

I cheered him.  I loved him.  He is such a great character, not just empathetic, but a pansexual.  He falls in love with the person, not their gender or sex.  Although pansexuals are unusual, they are interesting people.  When I looked up the difference between pansexual and bisexuals, I found the following quote on a blog:

The dictionary states the definition of bisexual as: “sexually attracted to both men and women.” Meanwhile, the definition of pansexual is: “not       limited or inhibited in sexual choice with regard to gender or activity.” … Pansexuality, on the other hand, implies that there are more than two         genders.  https://www.healthyplace.com/blogs/thelifelgbt/2014/11/differences-between-bisexuality-and-pansexuality/

I belong to a community who believe there are more than two genders, and that is a hard concept for some people to conceive.  I know people who choose to identify as ‘they’ and although it can be a challenge for me, I respect that they don’t want their gender to identify them.  Some people believe we are being too accommodating, but I believe allowing someone to express who they are isn’t being politically correct, it’s about being human and respectful.

Peter’s parents are people I would love to emulate.  They are loving of their son and completely accepting of his unique ability to love special people.  The relationship between Ayla and Peter is delightful, despite the backdrop of family violence.  When it comes to the bedroom?  Handled deftly and joyfully.  It was about love.

So when things with Ayla’s family became even more serious, Peter’s desire to keep her safe was completely understandable and her balking about being kept prisoner is realistic.

When the violence returns, it was horrific and unfortunately predictable.

Now, when I flipped the page after the violent event, I was staggered.  I won’t go into details, but I was crying freely on the bus, surrounded by a bunch of men heading to construction sites who were looking uncomfortable because some woman was crying.  I didn’t care.  My heart was breaking.

The epilogue provides some hope for the future.  That there are good people in the world who will fight for change and sometimes that change can occur.

I honestly believe everyone can get something out of reading this book.  Yes, the violence can be disturbing.  Yes, if you’re not comfortable with people who are transgender, this book will challenge you.  But, to me, the best books are the ones that challenge you to move beyond your comfort zone.

Phetra H. Novak often refers to herself as the odd man out, the dorky book nerd. She’d rather spend time with a good book or making up fantastic stories with even more fantastic characters, than live in the real world dealing with real people.

The real world is strange, in a very non-humorous way, and people in it complicate it to the point of wearing you out. In the written word world, whether it’s someone else’s words or her own, things might get busy, complicated, and even downright painful, but somewhere along the line, a heroes always on the horizon. He’s probably not a prim and proper, church-going pretty-boy since the author prefers rebellious men and women who don’t follow the protocols of society.

One of her favorite saying is that “Only dead fish follow the stream,” and well she ain’t no dead fish.

Phetra lives with her family—two children, a domestic partner, and their two cats in Gothenburg, Sweden. When reading her books, you’ll notice she always finds a way to bring her own culture into her books.

The joy of reading and writing comes from her childhood and is something she has always loved, and been passionate to share with others. Phetra loves hearing from her readers, even with ideas of what they’d like to come next.

If you are looking for her, the best place to start looking is at home in the quietest corner of the house, where she’ll be curled up with either her Kindle reading or with her laptop typing away.