Dana, Melissa, and MtSnow review The Ghost Slept Over by Marshall Thornton. (Released on audio February 2, 2018. Length: 6 hrs and 13 mins.  Narrated by Jason Frazier. Ebook self published January 8th 2015, 237 pages) A copy was provided in exchange for an honest review. 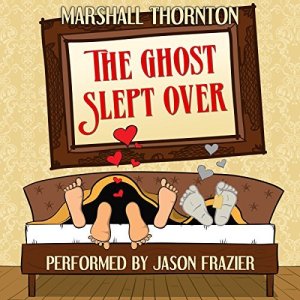 When failed actor Cal Parsons travels to rural New York to claim the estate of his famous and estranged ex-partner, he discovers something he wasn’t expecting – the ghost of his ex! And, worse, his ex invites Cal to join him for all eternity. Now.

As Cal attempts to rid himself of the ghost by any means, he begins to fall for the attractive attorney representing the estate. Will Cal be able to begin a new relationship, or will he be seduced into the ever after?

The narration: It’s been a while since I listened to this narrator. What I remembered was that Jason Frazier could produce some very delicious tones in his voice that could make me melt. And at times I think he could sound too sexual at times when it wasn’t quite right. I didn’t experience that in The Ghost Slept Over, though. I remembered how very talented he is at female voices. It is so different from his regular voice that I almost can’t believe it’s the same person. Overall, I was pretty pleased with his narration. I hope to hear some others from him soon.

The story: I have to explain that most of my experience reading Marshall Thorton is with his Nick Nowak Mysteries. I have read nine books in that series and I am used to that narrative. I always worry about checking out other books by an author who I associate with a certain series or set of characters. I shouldn’t have worried about this book though.

At first, the book did seem a bit slow for me. Cal isn’t really a likeable character. He is homeless but still trying to achieve his dream of acting. Usually that is the type of character I’m rooting for. Cal is just a bit full of himself though. Since I listened to the book and didn’t read it, it’s hard to say that that is the way the author wanted him to be or if that is more narrator portrayal. But I didn’t really care for him. As soon as the action started, though, I was jumping aboard this kooky ghost story.

Most ghost stories are a little more on the spooky side and I am a chicken. This story is more of a comedy. It brought back memories of watching Blackbeard’s Ghost when I was younger. Crazy ghost hijinks. I love that kind of story. The ghost of Mac is pretty egocentric and that narration is just right for him. Mac isn’t ready to get rid of his house or his ex, Cal. His attempts to stop the sale made me laugh. I didn’t really like him but enjoyed his character. His attempts to help Cal into the afterlife with him are a little bit menacing but overall, I think he just didn’t want to spend eternity alone.

There is a bit of romance in this book when Cal meets Mac’s lawyer, Dewey. I guess I like Dewey. He is pretty straight forward and wants to help others. He doesn’t seem to be your typical lawyer shark, but he is lacking a little bit of depth. His family moved out of the country and even though he is involved with the local drama group, he doesn’t seem to have any close friends. I guess since Cal is kind of a loner, too, that they make a pretty good pair. There isn’t anyone to keep them from each other and maybe they can fill the emptiness in their lives. The part that feels undeveloped is that neither of them really acknowledge being lonely. Maybe it doesn’t bother them, but I just wished for just a little bit more emotion in the story.

I am definitely glad I got this audio copy for review. There were parts that I found so funny and sweet. The narration was really good, too. I definitely think this is a good rec when you want something fun and less complicated.

OMG, this book was AWESOME!!!! Seriously, if you like to laugh – this is the book to read/listen to (hint – the audio was amazingly wonderful and if you can, choose that option. 😉 ). I found myself laughing – out loud!!!! – soooo many times. 😀

Mac is a ghost, but that doesn’t stop him from being a self-centered dramaqueen, lol. The reason he is a ghost isn’t particularly relevant to the story, just know it wasn’t foul play. He has left his entire estate to his ex, Cal, who is a broke (lives in his truck) “actor.” Dewey is Mac’s lawyer and has contacted Cal to iniherit the estate. Now that I’ve set the scene, let the fun begin!!

Mac – for whatever reason – hasn’t moved on to wherever spirits go next. So, he decides to harass Cal and as the blurb says, tries to convince him to kill himself so they can be together forever. Ahh, the comedy. Mac is just a hoot!!! Yes is a selfish a-hole, but he’s so, so, hmm, so selfish and crap, I don’t know the word for what he is but I loved him!!! And Cal is adorable!! I loved to watch them interact with each other and the ghostbusting was just so gooooood!! I can’t express to you how much I loved the haunting and ghostbusting. No there weren’t any proton packs, but it was close. 😉

And Dewey, he is so cute and a little flustered around Cal, but part (if not most) of that is due to the fact that the Red Barn Players (local theatre group) is in need of Cal’s money so they can finish their latest production. Dewey had kind of been put in charge of getting Cal to donate money and it leads to some interesting interactions, lol. 🙂

The narration – Award Winning. This was just so great. The voices for each character were so unique and done so well, I couldn’t wait to get back to this audio. The realtor Cal hired to sell Mac’s house – I just looooooooved her!!! She had the funniest voice and her reactions to the “haunting” are to – die – for!!

Please, oh pleeeeease tell me there is going to be a sequel. I MUST have more of Mac and Cal and Dewey and the whole gang.

This was an interesting story. The idea of having an ex boyfriend come back to haunt you after leaving you all his worldly goods is definitely a new twist for me in the MM genre. It felt very tongue in cheek, and many times had me thinking that an actors life definitely isn’t glamorous!

The main character, Cal Parsons, is a barely making it actor that is living in his truck in the streets of LA. He seems to be the stereotypic struggling actor, and his daily struggles to get to his different jobs seemed rather realistic and stressful. Unfortunately, he felt a bit shallow to me. Especially when he received the news of his ex’s passing, and that he inherited everything. I mean yeesh, he didn’t seem too torn up about it, and seemed to almost think he was entitled to what he received. Then we find out Mac was, like, the only person Cal had ever thought could be ‘The One’ but he doesn’t seem too upset? And not just that, when he had an opportunity to help out the small town acting troupe, he was still thinking in $$$ , and expected them to pay him for his time and support. After receiving millions?! Good grief.

As Mac’s attorney and Cal’s ‘love interest,’ Dewey seemed more interesting to me, but he felt very naive as a small town lawyer. I didn’t understand why he had secluded himself in this tiny town with little in the way of romantic possibilities. I didn’t feel a lot of chemistry between Dewey and Cal either. It felt like they were both using each other to scratch an itch. Maybe if there had been more back story on either main character (we got a bit of backstory on the ex boyfriend and Cal’s relationship, but MUCH later in the story) maybe I would’ve felt more connection to each main character. But honestly, by the time it was finished, I realized the story was entertaining, but left a hollow feeling, as I didn’t connect to anyone I was reading about.

There is an incident where the three of them are in bed together, and it felt weirdly off that they were all engaging in sex, but that one of them didn’t realize there was a ‘third’. Mac was definitely a main character here, and the narrator nailed his voice and arrogance to a ‘T’. Mac is a master manipulator, and it is funny how Cal finally figures out how to help Mac ‘move on’ so to speak *smiles*

Narration – it’s been awhile since I’ve listened to anything that Jason has narrated, and you can definitely hear ‘acting’ in his voice. I’m thinking that may also have been why I didn’t connect. I think Jason did almost too good of a job performing as Cal. His tone and inflection reflected the arrogance of an actor at times, and just didn’t make me feel like I was listening to people being real, but like everyone involved was playing a part. No one in the story felt authentic. And I will say I got a bit uncomfortable when he used his ‘sexy’ voice, as sometimes it didn’t seem to quite fit the dialogue?

The author’s originality in the subject matter made this a fun story , and if you are in the mood for a ‘ghost’ story that doesn’t need much investment, other than time, this one will fit the bill.

Marshall Thornton writes two popular mystery series, the Boystown Mysteries and the Pinx Video Mysteries. He has been a finalist for the Lambda Award five times and won once. His romantic comedy, Femme was a 2016 Lambda finalist for Best Gay Romance. Other books include My Favorite Uncle, The Ghost Slept Over and Desert Run. He is a member of Mystery Writers of America.