Erryn and Melissa review ‘Brent (Bound and Controlled Book 1)’ by Shaw Montgomery. This book was released by the author on July 15, 2017, and is 124 pgs long. The audiobook version of this story was narrated by Kenneth Obi.  It was released on January 9, 2018, and is 3 hrs and 56 mins long. A copy was provided in exchange for an honest review.

Melissa: The blurb really got my attention and it already had some high reviews.  Since this is a new to me author and narrator, I took a chance. 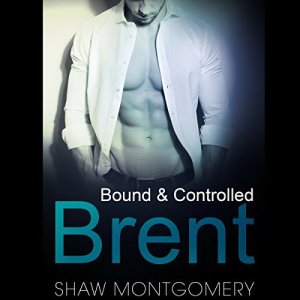 Brent had fallen for the one Dom he couldn’t have.

Brent’s legendary bad luck when it came to men was undeniable. If there was a wanna-be Dom in a hundred miles, he found them. But even he couldn’t have predicted what would happen next. Mixed signals and too much time off won’t make it any better, or will it?

Calen had fallen for the one sub he couldn’t have.

Calen knew most considered him the seen-them-and-leave-them type of Dom, but how could he stay when he knew they wouldn’t understand? When you’re a Dom who doesn’t match up to stereotypes, can you ever find the right submissive?

I listened to the first book in the series, ‘Garrett’, then moved right on to ‘Brent’, and I’m so glad I did.  These books are stand-alones, but you do get more enjoyment from listening to them in order.

Problem?  Calen works in the office of the insurance company Brent owns with his 3 brothers.  Also, Brent’s happy that his brother Garrett has found a submissive and Brenda wants Wyatt, Garrett’s submissive, to feel like part of the family, but it just reinforces that Brent’s alone.

Until his brother sends him home for a week so he can have an attitude adjustment.

The timing is interesting because when Calan shows up hungover the same Monday morning, Garrett also orders him to take the week off to get himself together.

Once the men realize they are both banished from the office, they decide there are worse ways to spend the week than together.

In the end, and Brent are perfect for each other because Brent is as indignant as I am about Calen’s rejection by some previous men he was involved with.

I loved that the relationship was a slow burn with lots of eating and laughter.  When things do get hot, it is perfect.

Kenneth Obi narrated the book and each time I listen to him, I enjoy him more and more.  His portrayal of Brent is spot-on.  Brent has a deep voice, and a calm demeanor.  Calen is deliberative as well and that came across.  Kenneth carries Wyatt’s southern accent as well as providing a good interpretation of Wyatt’s friend Carter.  That’s good, because I suspect Carter is going to get involved with one of the two single brothers.  Personally, I can’t wait.

I listened to book 1 (Garrett) as well and I did enjoy that one more than Brent, but part of that is because I didn’t feel like I got the chance to really know Brent and Calen. Overall the story was nice and entertaining and it was good to see more of the brothers, especially Garrett and his new sub Wyatt. 😉 It’s clear the author is leading us to the rest of the brothers who have their own stories, and I am okay with that. When the next story is introduced in the current story, sometimes it’s not carried off well, because it ignores the current characters. Personally I found it hilarious when Bryce is being “grilled” by his brother about his clients. It’s obvious he has feelings for the Dom and Sub pair, but he appears to be fighting it. I would LOVE the chance to read their story.

As for Brent and Caleb, their relationship started off weird to me because we don’t get to fully experience their history on page. I would have preferred it if their scene history had been shown in real time and not in flash backs, and I would also have preferred it when they did come together in present time that there hadn’t been so many games between them. They’ve known each other a long time and certainly should have had a sense already of who they were (in and out of the scene), but they kind of did a dance as if to be getting to know them in this new context.

Kenneth Obi is the narrator for books 1 & 2 and overall I enjoyed his narration, particularly Wyatt’s. 😉 Since the same narrator did do both books, it was a little hard to differentiate between Garrett and Brent. They both had deep voices and maybe I didn’t notice in Garrett’s book, but Brent’s voice didn’t come across as a natural tenor. It felt forced and it really took me out of the story.

Shaw Montgomery loves reading, traveling, and family. While not necessarily in that order, they all rank pretty close. Shaw has lived all over the United States and even Germany. While the coast of North Carolina is a favorite place Shaw currently lives in the Western United States. Current wish list places to travel to are Australia, Italy, and Scotland.

When Shaw wants to write about things that are a little more taboo (or sometimes a lot more taboo), Shaw writes under the name M.A. Innes. If you like M/m content that is sweet and naughty check out Shaw’s other books.

Note – there is a prequel of the series, found for $1.00 on Amazon: The Owners